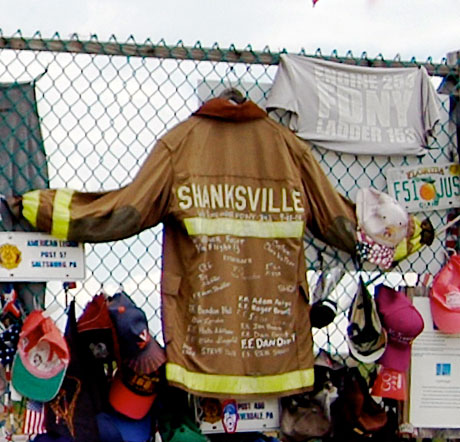 For citizens of the United States, September 11, 2011, is U.S. Patriot Day and the tenth anniversary of terrorist attacks on New York City and Washington D.C., one of which was foiled when a passenger uprising led to a plane crash landing instead near Shanksville, Pennsylvania. A coat from the fire department that responded to the crash is pictured above.

Ten-year multiples of anniversaries tend to be significant in people's minds, at least in cultures whose numbering system is base 10. There is no doubt that this day will command significant attention in the lives of those of us who are citizens of the United States, as well it should. There is no doubt, too, that for people who live in or simply were present or came to New York City, Washington D.C., or the region of Shanksville, PA, at the time or shortly after the attack may find this day either profoundly helpful or profoundly painful, or some combination of both, especially those who lost loved ones and colleagues in the crashes and the rescue efforts, or who were on hand to be part of the clean-up and rebuilding that followed.

But how should the call to remembrance for this event in our nation's or families' recent history be incorporated into the worship of Christians, and especially for Christians, such as United Methodists, who are part of a global church and whose baptismal vows call us to serve Christ "in union with the church which Christ has opened to people of all ages, nations and races?" (The United Methodist Hymnal, p. 34)?

Where is the line between appropriate remembrance in the context of worship of our Triune God and inappropriate focus on mere patriotism?

And how might we offer due recognition of this day, honoring those most directly affected, without causing more pain by the re-opening of wounds at least resolved to scars if not entirely healed?

What Not to Do

My guess is we can all recognize the "outer limits," things we all would agree should not be done. We should not design worship on this Sunday primarily in praise of America or its "ideals." That turns into idolatry of the nation. We should not take this as an opportunity to support fears about or raise new fears of Muslim people in our midst, as the recent terrorist attacker in Norway has sought to do. This diverts worship that should glorify the God of all creation into a kind of "my people only" solidarity rally.

We probably should not show footage of the planes crashing into the Twin Towers or the Pentagon, or even the wreckage in the field near Shanksville, PA. We've all seen those images hundreds if not thousands of times. No doubt the media will be replaying them frequently in the lead-up to this day. Such images now probably do more to harm than to heal, if they ever did much to heal in the first place.

Finally, something you may rarely hear me suggesting: If you follow the Revised Common Lectionary, as the vast majority of our congregations in the United States do, either heavily edit the selection for the Old Testament reading (the crossing of the Red Sea) or do not read it at all. Why? A good number of the verses included in this reading extol the deaths of the Egyptian soldiers, mired in the mud and then drowned in the Red Sea. Egypt today is a primarily Muslim nation. Rejoicing in the deaths of ancient Egyptians on this day is a bit too close to wishing harm or worse to our Muslim neighbors and Muslims around the world, and would easily be read and understood that way by many Muslims, even if that may not in any way be the intent (conscious or otherwise) of Christian congregations. If your congregation has been focusing on the Exodus narrative prior to this day, and so there is a reason to continue doing so, strongly consider reading and preaching from only these verses: Exodus 14:19-22, 27a, and 29-30a. What matters from this narrative on this day is that God made a way where there was no way and led the people through it to safety-- not that the Egyptian army was drowned. We can and should rejoice this day in God's deliverance. We should not rejoice this day, of all days, in the deaths of enemies.

If the first reading from the Revised Common Lectionary is problematic, the other two may be very, very helpful. Romans 14 focuses on showing respect and honor to people whose cultural and even religious principles may be very different from your own. People were coming to Christ then and there, as they do here and now, from a wide variety of cultural and religious traditions. This was especially true in Rome, a hub for many cultures because of its political and economic influence in the Mediterranean world and beyond. It's also the case today in many American cities, and across the nation generally, as the diversity of our peoples continues to increase. Paul writes here to a church that needed this message then, and we are a church in a place that needs it now! The church that sought to help these diverse people live as one body in Christ with many members (Romans 12) needs to find ways to live with and respect the diversity of those who come to it, and indeed, of all people everywhere, as Rome itself attracted people from nearly every nation! There is much to explore here about building a continuing movement of mutual love that respects diversities in your congregation and the wider community.

Matthew 18 addresses what it means to forgive those who have sinned against us. The work of forgiveness is essential work, Jesus reminds, essential not only for the healing of others but for our own forgiveness from God as well. Forgiveness does not mean "forgetting." Nor does it mean that people who have harmed the wider community or people in it do not have to face the consequences of their actions so that safety can be assured and some measure of the damage done to the community and those involved can be redressed. But it does mean, as Jesus concretely addresses in the story he tells here, that we as his disciples no longer hold a debt sheet on those who have harmed us. We are to do for others who sin against us as God has done for us. So the questions on this day become, "Whom do we, individually and as congregations, still need to forgive? How will we do that? How will we show we have done so?"

Respect or forgiveness-- two strong ways forward on this day.

You should also sing at least one song as a prayer for your nation. The United Methodist Hymnal has two songs that may be particularly appropriate: "God of the Ages" ("God of our Fathers," in previous editions, #698) and "This Is My Song" (#437). You will find an array of others listed under the Remembering 9/11 resources on the Discipleship Ministries website.

And as a response to the Word, let me suggest "A Litany of Grateful Memorial." The point of this litany is what it says-- to remember with gratitude, rather than with lament, the people who were involved in the events of that day or in the days that followed it.

How would this work? If it's part of morning worship, you will already have read the texts you need for this. Exodus 14 (as edited) provides a basis for giving thanks for acts of deliverance, such as were offered by thousands of rescue workers who came from around the nation, and some from around the world, to assist just after the plane crashes. Romans 14 points to respect for all the diverse people who were in harm's way on the day of the attacks, including again the diverse population of workers who came united in the causes of rescue, help, and rebuilding. And Matthew 18 addresses the need some of us may still have as we remember not only those who suffered, but those also who caused their suffering or deaths, and anyone else who may have sinned against us in any way.

As a response to the word proclaimed, begin a reading of names of people involved as victims, rescuers, or others who came to help (which may include some members of the congregation) known to members of your worshiping community personally. This should include names not only of the deceased or injured, but also those who are alive and well. If your congregation sent a work team to New York City, for example, list the names of the people who were part of that work team. As each name or group of names is read, ring a bell and either say, "Thank you, God, for the memory of these good people" or sing a brief song or chorus of thanks, such as "Thank You, Jesus" from The Faith We Sing (2081) or "Thank you, Lord" from The United Methodist Hymnal (84).

In the confession of sin that may follow, especially if you focus worship on Matthew 18 this day, explicitly invite people to confess any unforgiveness that remains in them and then to forgive those people from the heart. In the sharing of the peace that follows, invite people to go first to anyone they have just forgiven or recently forgiven, as well as any they may have offended, and offer signs of forgiveness and love. Then let Communion be a celebration of life and deliverance. Consider using "The Great Thanksgiving for the Season after Pentecost" (The United Methodist Book of Worship, 70-71) because of its expression of great hope for justice and peace to come.

If you have a very large list of folks you personally know, but only an hour of worship time (perhaps folks might be willing to make an exception on this day?), strongly consider offering a briefer version of this "grateful memorial" (perhaps limiting the list to nearest relatives, closest friends and church members) and then offering a fuller version as part of a community-wide service, and perhaps an interfaith service, later in the day.

Many other worship resources-- preaching, worship elements, and songs-- are available on the Discipleship Ministries website, especially our Remembering 9-11 section; and more will be coming in the days and weeks leading up to September 11.

May good neighbors, great conversations, loving memories and the promptings of the Holy Spirit guide you and your worshiping community as you prepare to celebrate this day with solemnity, integrity, and grace.

You may offer comments on this article on the UMC Worship Blog.

We Will Not Forget

We pause to remember loved ones affected by attacks in the United States at the World Trade Center Towers in New York City and the Pentagon in Wa. . .

Your Peace with Justice Sunday gifts change lives in places where the joy of knowing Christ is mixed with the tragedy of violence. United Methodi. . .

Ezekiel 1:1 (NRSV) In the thirtieth year, in the fourth month, on the fifth day of the month, as I was among the exiles by the river Chebar, th. . .