The Relationship Cure: A Five-Step Guide to Strengthening Your Marriage, Family, and Friendships
by John Gottman and Joan Declaire
New York: Harmony Books, 2001 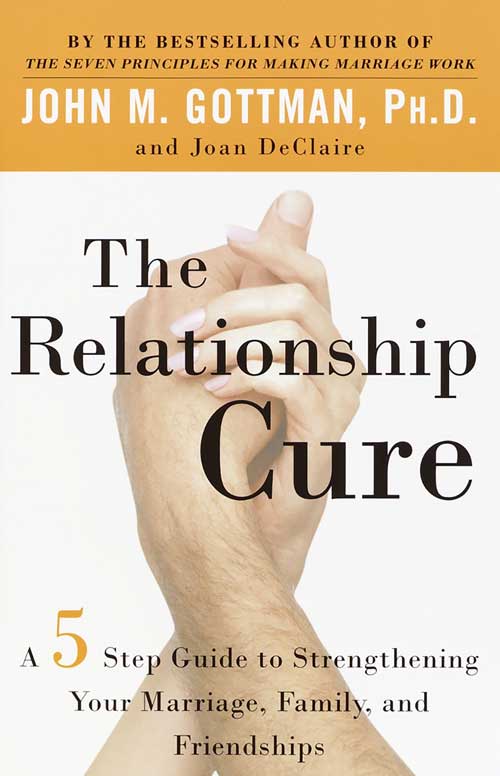 To feel connected with other people, we often ask a question, make a statement, or gesture in a way that invites a response. Authors John Gottman and Joan Declaire call such initiatives “bids” and encourage us to analyze the ways we typically make bids for connection and how we respond to the bids of others. Frequent bids and positive responses create a high level of positive engagement, which provides a reservoir of good feeling that can enable people to deal more effectively with conflict when it arises. Instead of becoming reactive and defensive when they disagree, people who have built a strong bond are more likely to stay connected and work things out.

Fulfilling relationships don’t just appear in our lives fully formed. They are built one encounter at a time. Hence the importance of learning effective ways to bid for each other’s attention and to recognize and respond positively to each other’s bids. Using illustrations from their research and counseling practice, the authors show how being more mindful and paying closer attention to how we bid and respond can strengthen connections between couples, parents and children, siblings, friends, neighbors, and colleagues at work.

Through their observations of couples’ interactions, the authors have concluded that people typically respond to another’s bid for connection in one of three ways: turning toward the other, turning against, and turning away. Turning against, by making hostile, sarcastic, or argumentative remarks, obviously hurts a relationship. So, too, does turning away - by ignoring the bid or acting preoccupied. The authors explore factors that influence a person’s ability and willingness to turn toward others: the way their brains process feelings, how emotions were handled in the homes in which they grew up, and their own emotional communication skills.

The authors state that when people bid for connection, they are usually trying to satisfy one of three common emotional needs: “(1) to be included, (2) to have a sense of control over their lives, or (3) to be liked.” Good connections enhance family life, workplace environments, and communities. Failure to connect can interfere with emotional development and cause serious problems for individuals and society, such as the violent shootings and other assaults by alienated young men that have shocked us in recent years.

Improving the effectiveness of your bids and responses to bids is the first of the five steps mentioned in the title of this book. The other steps expand on the first. The text and exercises in each chapter guide readers (2) to learn how their brain’s “emotional command systems” impact their bidding; (3) to discover how their emotional heritage affects their ability to connect with others; (4) to develop effective emotional communication skills; and (5) to build more meaningful relationships at home, at work, and in the community. This book would make an excellent study for couples or individuals or for groups including both.

John Gottman is perhaps best known for his earlier books, such as The Seven Principles for Making Marriage Work: A Practical Guide from the Country’s Foremost Relationship Expert, written with Nan Silver (New York, NY: Harmony, 1999 and 2015) and 10 Lessons to Transform Your Marriage written with his wife, Julie Gottman (New York, NY: Random House, 2007). Visit https://www.gottman.com to learn more about his work, which is based on careful research and observation. You can sign up for a free “Marriage Minute” email (under Couples: Tools and Services) and order various books, training kits, and card decks, that offer conversation starters focused around several different topics (such as “52 Questions Before Baby”).

Jane P. Ives is a United Methodist Marriage and Family Ministries Consultant from Portland, ME.