Discipleship Ministries | I'm Definitely Not at Fault! — The…

Home Blog I'm Definitely Not at Fault! — The Scapegoat Fallacy

I'm Definitely Not at Fault! — The Scapegoat Fallacy 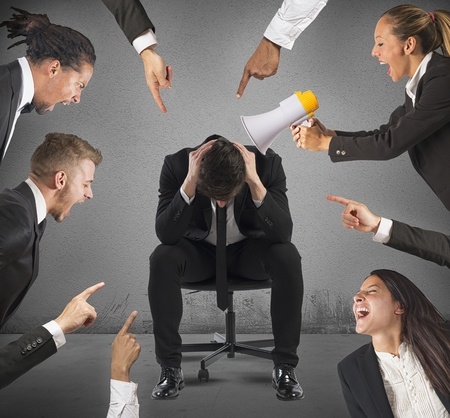 While not a bias, the scapegoating fallacy is another dynamic that keeps us from learning. Scapegoating, at least the way I’ve observed it in current discourse, assigns blame exclusively to one party or person as the sole cause of problems. As a logical fallacy, it is usually employed when the object of derision cannot make a defense. (“Satan made me do it!”) The way scapegoating is being employed currently is through a narrative that asserts that once the problematic party or person is removed, then things will be made right. Obviously, we see this dynamic at work in politics. For Republicans right now, the scapegoat is either the progressive agenda or Obama and/or Hillary. (The “Thanks Obama!” trend on social media displays scapegoating in a very humorous way.) For Democrats, the scapegoat is Donald Trump becoming president or a conservative agenda.

Church folks are not immune from using this fallacy. (After all, it’s in our spiritual DNA; see Adam and Eve.) I remember being part of a staff that had a large percentage of changeover in a matter of a couple of years. Each time, it seemed that once one person left or was removed, everyone felt that things would get substantially easier. Each time, we couldn’t figure why obstacles still existed. The complications in that situation were many and much larger than the one person who was made the scapegoat. The culture that existed didn’t change overnight once the person left. In addition, we were contributing to the culture in ways we weren’t aware of or didn’t acknowledge.

The Pharisees and Sadducees saw Jesus as a scapegoat (yes, lots of irony here). Jesus was disrupting and misleading the people. He was the problem. Once he was removed, then peace would be restored (albeit not the peace any Jew desired). Yet the gospel writers implicate all of us in Jesus’ death by including the dominant forms of power – political (represented by Pilate) and the religious (represented by the Sanhedrin)– that collaborated in Jesus’ death. Thus, all spheres of life, political and religious, are guilty. We are part of the problem too.

The temptation inherent in the scapegoat fallacy is to believe that the source of a problem is singular in scope and external to ourselves. Thus we fail to consider other dynamics, and we fail to consider our role in the problem. By maintaining the scapegoat fallacy, we do not have to do the hard work of self-reflection. This also keeps us from being part of the solution.

One of the purposes of Courageous Conversations is to bring the invisible into the visible. Becoming aware of our contributions to an issue or problem (usually invisible) is helpful when we do the hard work of soul-searching and even repentance (visible). Such are the habits that enable us to become better disciples of Jesus Christ.

Are there people or groups (think youth group) in your church that often become scapegoats?

How does our Communion liturgy (Confession and Pardon) give space to acknowledge our contributions to evil, offer time for repentance, and receive forgiveness?