Discipleship Ministries | Notes and Commentary on the Cathedral… 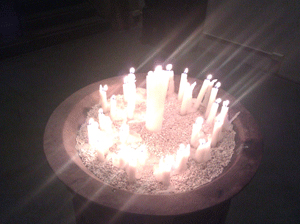 There are a number of features of the "Blue Christmas" rite that are not fully evident from the printed order. Indeed, this is one of the risks that goes with equating liturgy and printed texts. Liturgies as experienced theology are always more than the texts that support them. Indeed, lived liturgy is our primary experience of God. These notes and commentary are secondary reflection.

The interior space was no different from the usual Advent Sunday set up with the following changes:

Entrance: As people entered the cathedral, ushers gave each person several paper stars with ornament hooks and a marker.

Music Interlude after Psalm 23 : This was done by a violin soloist accompanied by organ. I believe that it was the "Ashokan Farewell " by Jay Ungar and used repeatedly in Ken Burn's Civil War series. The arrangement lasted for about five minutes and invoked powerful overtones and affective connections.

The Second reading : Selected verses from Isaiah 40 were read, ending with v. 31.

Memory Stars : The presider invited all present to write on each star their concerns for others or their own.

Music Interlude : This supported participants during their writing. A bell tolled as a signal that the time for this action was over.

Litany of Remembrance : As the rubrics of the service indicate, with each section of the litany, the presider lighted a candle on the large brass wreath. The silence offered following each section was concluded with a single bell tone.

Offering of Light : Reference to the stories of Hanukkah and the Nativity led to prayer:

Help us reach out together for the light of faith, for renewal and recovery and a new day coming.
Grant that hope may come to rest in our hearts, and let it go forth with us into the darkness,
this night and in the nights to come, until we see the dawn.

Larger and shared narratives of God's faithfulness embraced the struggles and needs of participants. The presider invited all present to come and light a candle as an expression of yearning for light and hope. Each placed a candle in the sand and returned to his or her seat, leaving the candle to burn among the massed and growing light at the front of the church. (So many came that the surface of the sand was insufficient for the last participants to place their candles safely. In a subsequent year, a larger bowl or box of sand will be needed.) The Anthem, "Guide Me, O Thou Great Jehovah," supported the communal action. 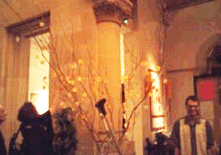 Star trees : At the conclusion of the service, participants took their stars with the named loss or concerns to the star tree where several people were ready to assist in hanging them. The trees were barren branches ten to twelve feet tall placed in planters and pots.

Blue Christmas/Longest Night services are a relatively new and growing phenomenon in the churches of the West, primarily in mainline Protestant and Episcopal churches. The services have in common recognition of the "blues" experience many people have concurrent with the culture's Christmas festivities. I am grateful for this enactment of a growing pastoral sensitivity to the needs of those who are making passage through loss and who struggle to find light and hope.

The move to plan and enact these services is largely generated out of local efforts to engage people in prayer and reflection that is honest and true to their inner struggles and yearnings. Christmas celebrations in the church and the culture at large focus on >hope realized , while the Blue Christmas rites focus on naming >what is still painful and shrouded in emotional darkness and uncertainty.

My own sense of the CoSA service was that it was strong and good because it expressed heuristically the faith of the church. This communal expression supported those living with loss, depression and struggle in naming and "owning" their "blues." While the texts of the prayers and litanies enumerated categories of loss and need, it was the environment of hope and faith punctuated with silence that allowed participants to "name" and own their particular loss(es).

For example, the faith of the church was expressed movingly in the recitations of Psalms 22 and 23, in the carefully chosen carols and biblical texts and the ways they were sung or read, and in the litanies and prayers. Woven in and around these affirmations, the community declared truthfully its collective pain and loss:

We have loved and lost . We pause to remember clearly, their faces, their voicse, their bodies. We embrace and give thanks for the memories that bind them to us in this season of expectation, when all creation waits for the light. ( Litany of Remembrance)

Similarly, less final losses, though no less painful ones, were named:

We light this second candle to remember the pain of loss: loss of relationships,
loss of trust, loss of jobs, loss of health, loss of faith, the loss of joy.

Worshipers were carried by the liturgical texts and actions to inhabit the larger narrative of the world's waiting for the Light to come. I attended the service intent on praying for several friends who had recently lost jobs and several in my Order who were experiencing grief. As the service progressed, I began to be aware of a sense of loss in my own life that needed to be named. Without forgetting those I had come to pray for, I was carried in seeing beyond my sense of isolation and loneliness to stand with the church to

remember faith, the gift of light and hope that God offers to us in the stories of Hanukkah and of Christmas,
which both also began in abandonment, insecurity, and humbleness…

I want to emphasize here that the grace of this service was found in its enactment. It was not simply a recitation of texts, though that, when done well, is a significant action. It was a richly textured experience of >sacramenta l actions: Gathering for reflection, naming, writing on the stars, pacing the readings and keeping silences, embracing and being embraced by evocative music, accepting the offer of light, moving to a central place and lighting the candles, singing familiar carols within a distinctly different context, hanging the stars on what appeared to be barren branches, and greeting one another in the name of the Lord.

It is noteworthy that sacramental actions here did not include the Sacrament. Holy Communion was not celebrated -- an intentional decision, I am sure. One could argue that it should have been, and perhaps in some contexts it would be most appropriate. However, the context of this service was one of open hospitality to any and all persons, regardless of their religious tradition (certainly the presence of both Jews and Christians was affirmed). CoSA's missional idenity is to be "a gathering place that joyfully reflects God's Love, dedicated to the values of community as expressed through Mana (divine energy), Pono (righteousness), and Malama (caring stewardship)." [From the cathedral's website]

I am not suggesting that the gospel was discounted or diminished. Rather, it was embodied suitably by a faith community that gathers in the city center. In this context, the service avoided creed and sacrament in order to offer a broadly inclusive opportunity to "gather" all who "have been heavy with our burdens."

This service was, as with all the worship of the cathedral community, carefully planned, paced, and enacted. Readers were prepared and sensitive to the setting. The music was gracious and attentive to tempo and volume. The texts were carefully chosen or crafted to carry both the gospel of God and the hurts and yearnings of the people.

In narrating this service and affirming it, I do not mean to overshadow other attempts to ritualize on the longest night with those who are blue. This was one community's venture to enact God's love and care for those cast down amidst the culture's festive excess. The invitation I hope readers will find here is to plan well and embody God's love with such uncommon grace in your context.

Copyright © 2008 Daniel T. Benedict Jr. "Notes and Commentary on the Cathedral Church of Saint Andrew (CoSA) ‘Blue Christmas' Liturgy" may be reproduced in whole or in part for non-profit educational use as long as no charge is made to participants and the copyright notice is included.

'Prepare the Way of the Lord'

At Christmas time, we welcome the king of peace who comes to save the whole world. How should we prepare?. . .

﻿How can you celebrate Jesus’ coming? How can you express your love for Jesus? Glorious God came down here to live with us, to be friends with us. . .