Discipleship Ministries | "I've Been 'Buked and I've Been Scorned":…

Home Equipping Leaders African American "I've Been 'Buked and I've Been Scorned": What Is Your Story?

"I've Been 'Buked and I've Been Scorned": What Is Your Story?

I’ve Been ‘Buked and I’ve Been Scorned

Ain’t gwine to lay my ‘ligion down

Children, ain’t gwine to lay my ‘ligion down

What Is Your Story?

Lolo Jones is a runner who had the lead in the 100-meter hurdles during the 2012 Summer Olympics. With two hurdles to go, her foot hit the ninth hurdle, throwing her off stride and allowing six other women in the race to power past her. She put her forehead on the track and pounded her fist on the ground because a lifetime dream was clipped by one hurdle. She was heard shouting, “It’s the hurdles," choking back her tears, "you have to get over all ten, and if you can’t, you’re not meant to be the champion." Lolo’s story is that she did not receive the gold medal because she stumbled at the ninth hurdle. 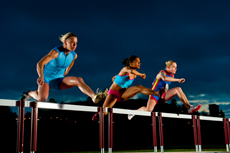 One of the exercises that you can engage is to list those thoughts and values that keep you from consistently achieving the goals that you have set for yourself. What are the stories that you tell yourself? What freezes you in your tracks when you think that you are ready to make a breakthrough?

The gospel story is about making a breakthrough. It is about identity. Jesus knew who he was and therefore he did not suffer an identity crisis, even when others were trying to define him. Jesus recognized the importance of knowing his identity and call. Jesus asks his disciples, "Who are the people saying that I am?"

Jesus asked his disciples how the people were identifying him. Some thought, they said, that he was John the Baptist. Others said that he must be Elijah or Jeremiah or another prophet. But then he queried the disciples about who they thought he was. The disciples responded by saying "you are the Christ, the Messiah, the Son of the living God."

Jesus was declaring his identity and purpose. Many were trying to name Jesus, but he turned to his closest disciples; and they confirmed that they really knew his identity. Identity was important to Jesus; being called by the right name is important.

I remember early in my ministry doing a wedding; and during the rehearsal I kept mixing up the groom’s first name with his brother, who was acting as the best man. We kept practicing, and I thought that I had the names straight until during the wedding ceremony, when I uttered the name of the best man for that of the groom. It was an awful experience, the people began to groan, the groom’s father had a disgusted look upon his face, and the bride was in tears.

Getting the name right was important for that wedding party. I should tell you that I saw that bride some years later, and she informed me that she and her husband were divorced. Then she said, "maybe your getting the names wrong was an omen. Perhaps I should have married the brother."

Identity was so important to Jesus that he actually told Peter who he was. “Peter,” Jesus said, "you are a rock; the rock upon which the church will be built." Peter would have access to all power and grace. It was in the act of naming Peter that Jesus actually passed on the expansiveness of Peter’s authority, challenging him to rise up to his destiny as the foundation of the church.

What is your name today? Have you been willing to rise up to the challenge of what Jesus’ call challenges you to become?

It is actually our strength and not our weakness of which we are most afraid. It is the knowledge that we are powerful beyond measure. It is our light, not our darkness, that most frightens us. We ask ourselves: "Who am I to be brilliant, gorgeous, talented, and fabulous?"

Actually, who are you not to be those things?

You are a child of God. Your playing small doesn't serve the world. There's nothing enlightened about shrinking so that other people won't feel insecure around you. We are all meant to shine, as children of God do. We are born to make manifest the glory of God that is within us.

We are all meant to shine, as children of God do. We are born to make manifest the glory of God that is within us.

It's not just in some of us. It's in everyone. And as we let our own light shine, we unconsciously give other people permission to do the same. As we are liberated from our own fear, our presence automatically liberates others.

What is the story of your life? What have you been telling yourself to justify playing small? Have you been talked about, scorned, or rebuked?

It dawned on me that one of the reasons that we play small is that responding to our potential calls us to change. One of the realities of our existence is that change is the only constant there really is. Ours is a cycle that moves from no life to life to no life. We live and die in a process of cyclical change. Seasonal reality brings about winter, whether or not we want it. It sends those we love on to other places and journeys in spite of our desire to have it otherwise.

Dr. Wayne Dyer in his book, Change Your Thoughts, Change Your Life, has an interesting perspective on change that may help us all. When one person leaves you, it feels like the end of the world. When a business venture fails, you flunk out of school, or you have a painful illness or injury, you feel depressed. But if you allow yourself to get trapped in these emotional endings, you’re not permitting them to be a natural part of life. The reality is that beginnings are often disguised as painful endings. So when you know that there is a constant beyond the present moment’s disappointment, you then know that this too shall pass. The current pain of loss and disappointment is not a period that ends the story. It is merely a comma, leading to a new adventure that God is about to uncover for you.

Are you playing small in order to avoid pain? That pain that you are experiencing may be the birth pains of the new you that God wants to see come forth. Like Peter, God is waiting to give you a name, a name of triumph, opportunity, and grace.

What about the character of a church? Can a church play small, I wonder? The church is called to be an expansive and energetic body of renewal and hope. Furthermore, ours is a power that opens all doors and creates a venue between the divine and our human endeavors.

Our call is really in our name: it is a call to make the story of Jesus Christ and God’s plan for liberation real for all of God’s people throughout the world. A word to The United Methodist Church: let us not play small, but let us reach the fullness of our potential; the name that God has given us is to bring the gospel to the whole inhabited earth.

What is your story today? What has been keeping you from becoming what God wants you to be? Have you been allowing the wrong people to name you or define the scope of your horizons? Have you bought into self-limiting thinking? Jesus wants to free you from that pattern of thinking and see you flourish as individuals, as a people, and as a church.

I was in a seminar one day, and the question was asked, "What is the story that you have been telling yourself in order to explain why you did not achieve something?" People were giving all kinds of answers. Some said that they did not have the training or experience. Others said they lacked the family connections, and so on. Then suddenly, there emerged a voice from the audience that said, "I did not have the Supreme Court." Everyone turned to see Al Gore in the audience suggesting that he did not achieve the presidency because he did not have the Supreme Court.

What this question raises is what we do when we hit the brick walls of our lives. Do we hide what we are and wait out our days with fear and trepidation, or do we find renewed hope for the birth that is happening within as we become more.

What is your story? What is your name? What is your future? The next time that you trip over your ninth hurdle, chalk it up as part of your journey: get up and press on to the tenth hurdle.

And please don't lay you 'ligion down.

Juneteenth ought not be a celebration only for those in the Africana tradition, but for all of God’s people.. . .