Discipleship Ministries | History of Hymns: “The Strife Is O'er”

Home History of Hymns: “The Strife Is O'er”

History of Hymns: “The Strife Is O'er”

"The Strife Is O’er"
Translated by Francis Pott
The United Methodist Hymnal, No. 306

The strife is o’er, the battle done;
the victory of life is won;
the song of triumph has begun;
Alleluia! 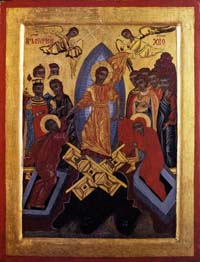 This Latin hymn captures the triumphant joy of the Resurrection and reflects the Christus Victor theology of the event.

Christ has redeemed humanity by being a ransom for us through his death, conquering the powers of hell and restoring the link between a fallen humanity and heaven. This redemption is classically envisioned as a great battle between Christ and the “powers of death” (stanza two) with their “legions.” The usually omitted stanza four emphasizes this struggle:

He brake the age-bound chains of hell:
The bars from heaven’s high portals fell;
Let songs of joy his triumph tell.
Alleluia!

Indeed, the classic Resurrection icon (sometimes called the Redemption of Adam and Eve) of the Orthodox Church provides a visual depiction of the victorious Christ standing over a chasm, trampling the gates of hell.

Beneath the cross that Christ now triumphs over is a gaping black pit often depicted with instruments of torture and destruction floating in its gloomy space. In this icon, the resurrected Christ pulls Adam and Eve by the wrist from their graves indicating that his redemption extends back to the beginning of time as well as forward to the end.

The final stanza draws upon Isaiah 53:5—“But he was wounded for our transgressions, he was bruised for our iniquities; the chastisement of our peace was upon him, and with his stripes we are healed.”—and I Corinthians 15:55—“O death, where is thy sting? O grave, where is thy victory?”

Lord, by the stripes which wounded thee,
From death’s dread sting thy servants free,
That we may live, and sing to thee:
Alleluia!

Christ won this battle decisively because he did not succumb ultimately to death. Through his Resurrection he closed the gates of hell and opened the portals of heaven. Our role, according to the original Latin, is to join in the celebration of this cosmic event by rejoicing (gaudeamus) and singing (canamus).

American hymnologist Leonard Ellinwood traces the origins of the hymn to a book of compositions in four voices published in 1695. John Mason Neale (1818-1866), the famous British translator of Latin and Greek hymnody, included the Latin text with his translation in his Mediaeval Hymns and Sequences (1851).

Francis Pott (1831-1909) provided his own translation of the original Latin for his Hymns Fitted to the Order of Common Prayer (1861). Pott was on the hymnal committee for the first edition of the famous 19th-century landmark British hymnal, Hymns Ancient and Modern (1861); Pott’s translation, with alterations, was included in this hymnal. It has become a staple of Easter hymnody since that time.

Hymnologist Albert Bailey correctly notes that the “joyous music of [Giovanni Pierluigi da] Palestrina [1525-1594] has helped to carry this hymn to its continuous popularity.” The “alleluias” that begin the hymn signal the joy that is to follow.

From time to time, portions of a pre-existing musical composition are altered for the sake of a hymn tune. In this case British composer William H. Monk (1823-1889), the composer of many hymn tunes, borrowed the first two phrases from Palestrina’s “Tone 3 Magnificat” (1591) and, with a slight adaptation, set this music to the opening and closing “alleluias.”