History of Hymns: “Swiftly Pass the Clouds of Glory”

Swiftly pass the clouds of glory
heaven’s voice, the dazzling light:
Moses and Elijah vanish;
Christ alone commands the height!
Peter, James, and John fall silent,
turning from the summit’s rise
downward toward the shadowed valley
where their Lord has fixed his eyes.* 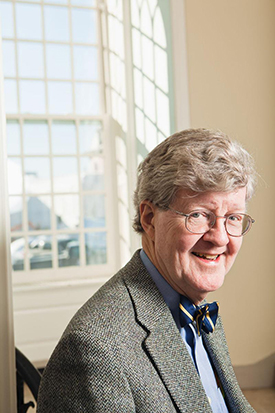 Can faith and science truly coexist? For Thomas Troeger (b. 1945), the answer is a definite “yes.” In fact, he has been integrating theological concepts with scientific terminology and disciplines through hymns for the past three decades.

Earlier in his publishing career, Troeger wrote poems based on the lectionary gospel readings. This was to supplement gospel texts that didn’t have a corresponding hymn already. Two examples are “Silence! Frenzied Unclean Spirit,” 1984 (The United Methodist Hymnal, 264), and “Wind Who Makes All Winds That Blow,” 1983 (The UM Hymnal, 538). His recent hymns reflect his interest in joining theology and science. Two composed in this century on ecology and creation — “Each Breath is Borrowed Air” (2002) and “How Miniscule This Planet” (2011) — are examples.

“Swiftly Pass the Clouds of Glory” (1989), first published in The Presbyterian Hymnal (1990), and the poem intended to be performed with it, “Density of Light,” are a powerful combination, demonstrating Troeger’s deftness in combining the realms of faith and science. Meant to be performed together on Transfiguration Sunday, with a narrator speaking the “Density of Light” stanzas between the congregation’s singing of the “Swiftly Pass the Clouds of Glory” stanzas, this dynamic duet indeed transfigures one’s perception about life’s intentions. Together, the hymn and the poem combine to reflect in modern language and understanding on the Transfiguration narratives found in the Synoptic Gospels (Matthew 7:1-8; Mark 9:2-8; Luke 9:28-36) as well as the allusion to this event in 2 Peter 1:16-18.

Tom Troeger orders his hymns with a clear progression of thought from stanza to stanza. Not tarrying in the clouds, Troeger commences the hymn with a sense of mission. Already in the first stanza, the Lord has “fixed” his eyes on the valley, where there is Kingdom-work to be accomplished. His disciples, quite stupefied, tacitly regather their thoughts on the way downward.

The second stanza reveals a further destination in Jesus’ mind — the cross. This is, however, hidden from the disciples’ eyes until after the resurrection. Only Jesus knows the trajectory of his mission at this point, and the disciples must discover the meaning of the transfiguration and the mettle of their faith through “betrayal, pain, and loss.”

Framed in a petition, the final stanza creatively discloses Jesus’ terminal stop with the words, “what lies past Calvary’s hill” and “our living and our dying and our rising.” That destination is the right-hand seat of the Father through the resurrection and ascension. Consequently, it is through faith in Jesus’ rising that the singer will be raised up and transfigured as well. In the meantime, however, his disciples on earth may ask God to transfigure their minds and life’s objectives, in order to shine light around them and render Kingdom-work into present-day shadowed valleys.

The text is paired with the tune GENEVA in The Faith We Sing. First published in 1943 through The Hymnal 1940, the hymn tune was written by George Henry Day (1886-1966). The name comes from Geneva, New York, where Day worked for Trinity Episcopal Church (1935-1966). The tune is interestingly split into equal halves: the first in F Minor; the second in F Major. This contrast highlights the antithesis between “dazzling light” and “shadowed valley.”

Density of light
that could shatter the cold rock of the moon
compacted flame
that only the face of holy love could withstand,
may Christ reflect your blaze
to the distant satellite of my heart
and melt the fear
that from the orbit of my days
you would scatter
my dim shards to darkness.**

The first stanza requests that Christ’s love may radiate into the hearer’s hearts and melt the fear and darkness out of them. The second stanza petitions for hope while the journey “from the mountain through the valley” is undertaken. Then in the third stanza, Troeger implements scientific terminology with phrases such as “the coldest rock in space” and the reiteration of “Density of light.” This realm of science, however, is then balanced with the realm of faith with the concluding doxology “Glory, glory, glory, glory be to you O God.”

The man who wrote both these texts was born in Suffern, New York, in 1945. Rev. Troeger grew up aspiring to become a professional flutist. During his high-school years, however, a dynamic and erudite minister – Richard Weld – arrived at his parish, altering Troeger’s vocational direction. Thomas later enrolled and graduated from Yale College.

Rev. Troeger consequently taught at Colgate Rochester Divinity School (1977-91), Iliff School of Theology (1991-2005), and Yale Divinity School (2005-2015). He retired in 2015 as the J. Edward and Ruth Cox Lantz Professor Emeritus of Christian Communication, Yale Divinity School and Yale Institute of Sacred Music. Interestingly, he is ordained in the Presbyterian (PCUSA) and Episcopal Churches, making him dually aligned with both traditions.[CC2] Besides writing many books on homiletics, church music, and imagination in the creative process, Troeger has published nearly four hundred hymn texts. Many of them can be found in current hymnals of most denominations, proving that he is one of the world’s most relevant and prolific hymn writers of this era.

Troeger is now retired and living with his wife, Merle, in Maine. His mission in integrating the languages of faith and science together is making a distinctive mark in the history of hymnody.

Stanton Nelson is a student in the Doctor of Pastoral Music program at Perkins School of Theology, SMU. He studied hymnology with Dr. C. Michael Hawn.

History of Hymns: ‘I Have Decided to Follow Jesus’

Sometimes even a simple hymn may provide problematic challenges for the researcher. Usually hymnologists are able to locate documentation in prin. . .

History of Hymns: 'Bind Us Together'

Hymns of Christian unity are essential to the life of the church. Sometimes we are the cruelest to our brothers and sisters in Christ—our sibling. . .

History of Hymns: 'Christ Has Risen'

One beautiful tradition for many churches on Easter morning is to begin outside with a Sunrise Service. Gathering with the community while it is . . .