Discipleship Ministries | History of Hymns: “Away in a Manger”

Home History of Hymns: “Away in a Manger”

History of Hymns: “Away in a Manger”


Away in a manger,
No crib for a bed,
the little Lord Jesus
laid down his sweet head.

The stars in the sky
looked down where he lay,
the little Lord Jesus,
asleep on the hay.

The origin of this popular Christmas hymn is shrouded in apocryphal associations with Martin Luther (1483-1546).

First, the facts. Methodist hymnologist Fred Gealy (1894-1976) noted that “evidence suggests that [“Away in a Manger”] is wholly an American product. The original two-stanza form probably originated among German Lutherans in Pennsylvania about 1885.”

Indeed, most sources note that the hymn first appeared with two stanzas in Little Children’s Book for Schools and Families, a Sunday school collection published in 1885 by the Evangelical Lutheran Church in North America.

Stanza three first appeared unattributed in Gabriel’s Vineyard Songs (1892), compiled by gospel composer Charles H. Gabriel (1856-1932). Gealy conjectured “the song may have been contributed by an editor or publisher who thought the two narrative stanzas needed to be supplemented by a prayer.”

The Rev. Carlton Young, editor of the UM Hymnal, notes that the only German version of the carol is clearly a translation from the English because the metrics are not natural to the German language. Furthermore, this version was first included in Herbert W. Werneke’s Christmas Songs and Weihnachts-Lieder (1934), a privately published collection. 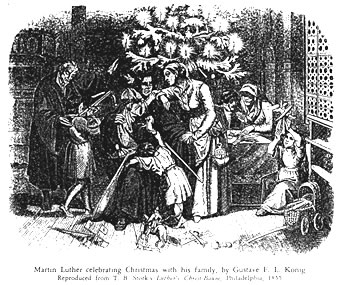 So how did a hymn that first appeared in the United States at the end of the 19th century become connected to the 16th-century German reformer Martin Luther?

The culprit who made the false association between “Away in a Manger” and Luther appears to have been James R. Murray (1841-1905), who in his Dainty Songs for Little Lads and Lasses (1887)—a most Victorian-sounding title—called it “‘Luther’s Cradle Hymn,’ composed by Martin Luther for his children and still sung by German mothers to their little ones.” However, no one has uncovered an original German version by the reformer.

Gealy, citing a 1945 article by Richard S. Hill, noted that “illicit inferences” to Luther are partly due to “the association of the carol with the glorification of Luther’s family life as depicted in a series of sentimental engravings done in the early nineteenth century by G.F.L. König . . . [including one that portrayed] Luther with his family on Christmas Eve as frontispiece [for a Christmas book].”

Theophilus Baker Stork (1814-1874), the author of this book, also wrote Luther at Home (1872), in which he stated, “Luther’s carol for Christmas, written for his own child Hans, is still sung.” The irony of this assertion is that we actually have a Luther hymn that may have been written for young Hans, “Von Himmel hoch da komm ich her” (1531), published in Joseph Klug’s Gesangsbuch (1535) and translated by Catherine Winkworth in 1885:

From Heaven above to earth I come,
To bear good news to every home;
Glad tidings of great joy I bring,
Whereof I now will say and sing.

Standards for attribution were much less rigorous before the 20th century. For example, in the 18th century, some works ascribed to J.S. Bach because of his stature were not written by the composer. Nineteenth-century shape-note tunebooks have vexed hymnologists for years as they have tried to discern authorship of specific tunes.

What about the text itself? Some suggest that we may be singing heresy, or at least poor theology at some places.

Stanza two notes, “the little Lord Jesus, no crying he makes.” Modern society knows that a baby who does not cry is a cause for concern. Hearing a baby’s cry at birth is a joyful sign of life. If the suggestion in the hymn is that the baby was a kind of super infant whose divinity overshadowed his humanity, then we may be moving into the realm of Gnosticism, suggesting that even in infancy Jesus had special knowledge.

The stanza concludes: “I love thee Lord Jesus, look down from the sky and stay by my cradle till morning is nigh.” This proposes a comforting concept that Jesus is watching over children, especially at night when children are more vulnerable and subject to manufactured fears of imagination. In the 18th and 19th centuries, even adults were thought to be closer to death while asleep. Though that notion is less accepted today, the idea of Jesus as a comforting presence is certainly an appropriate understanding for a child.

The final stanza, added later, follows the pattern of many hymns by using the form of prayer, petitioning Jesus’ presence in the first part of the stanza and blessing of “all the dear children in thy tender care.” The final petition requests that Jesus would “fit us for heaven to live with thee there.” This stanza would seem to indicate that all of us are Christ’s children by baptism and our eschatological hope lies in heaven.

In spite of controversies of attribution and perhaps a bit of slippery theology, this little gem of the season is still sung each year with fervor and joy.