Discipleship Ministries | Book Review: “Small Groups for the Rest of…

Home Equipping Leaders Adults Book Review: “Small Groups for the Rest of Us” by Chris Surratt

Book Review: “Small Groups for the Rest of Us” by Chris Surratt 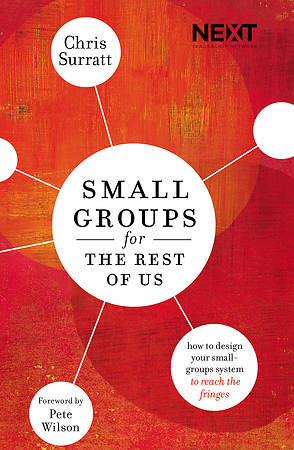 Small Groups for the Rest of Us: How to Design Your Small-Groups System to Reach the Fringes
by Chris Surratt
Nelsonword Publishing Group, 2015

Chris Surratt’s Small Groups for the Rest of Us: How to Design Your Small-Groups System to Reach the Fringes is a fruitful read for churches seeking to design or redesign their current small-group ministry. Besides being well-organized and easy to read, the book covers many of the issues raised when churches desire to focus on small groups.

Small Groups for the Rest of Us focuses on the design of small-group processes for the committed and not-so-committed within a local church community. Surratt emphasizes that small groups are the primary option for disciple making within a church. He urges churches to be intentional in recruiting for small groups and to simplify the process for directing and joining small groups. Like many current authors of books on small-group ministry, Surratt stresses that small groups must reach beyond themselves to engage their local communities. The “secret sauce” for small groups, according to Surratt, is an atmosphere that fosters camaraderie (“you, too?”) and vulnerability.

I appreciated Surratt’s tone. He does not come off as having all the answers or that the process his church uses is the only process that churches can use to successfully grow small groups. He offers wisdom, but reveals the mistakes he’s made along the way. He also tackles the most pervasive difficulties of small- group ministries: reaching men, reaching single men, determining the correct size of groups, providing child care, and recruiting leaders.

Surratt’s design strives to balance control from church hierarchy with organic groups that form around affinity. He critiques what he calls “free-market” small groups that form solely around affinity in favor of what he terms a “modified, free-market system.” He writes, “A free-market system is great for assimilating a lot of people into small groups; however, you have to make sure those groups include God. Otherwise they’re just social clubs with a theme” (6-7). His modified system includes allowing the small groups to choose their own approved curriculum (via a curriculum menu), although the groups are asked to participate in church-wide campaigns twice a year. There are also small-group coaches for the small-group leaders who help provide oversight, while allowing for freedom.

Small Groups for the Rest of Us tackles a couple of common thorny topics that repeatedly arise within United Methodism. Surratt helps us look at the question, “What constitutes a small group?” Without being clear about the core elements of a small group, churches often find themselves in confusion about whether the ushers or the sewing club count as small groups.

Surratt makes a useful distinction between ministry teams and small groups. He contends that small groups balance “evangelism, community, and mission” (110). But he says, “A ministry group can only focus on one or two of those practices at a time” (111). Those three core elements of a small group are similar to those identified by Eric Geiger in Transformational Groups and Transformational Discipleship: formation, connection, and mission.

Surratt also offers advice about the roles of small groups and Sunday school classes. For Surratt, this comes down to being clear about the role of each.

Surratt reminds us that since discipleship is fundamentally about helping people grow, there is no standard way people move through the process. “This strategy makes for straight lines on paper, but spiritual formation doesn’t always lay out in pretty, straight lines. No two people move toward Jesus the exact same way” (41). He also observes that “proven concepts and principles” are more important than particular systems as each church has a unique context. This is helpful reminder as many churches are seeking a “discipleship pathway” that not everyone will move through the pathway the same way. (Although John Wesley’s movement from prevenient grace to justifying grace and into sanctifying grace is a framework United Methodists forget at their own peril!)

For all the wisdom and helpful advice that Surratt passes along, there are a couple of places where the book falls short. While Surratt’s critique of focusing on affinity groups is beneficial, those of us trained in Safe Sanctuaries might see some red flags. His defense for using leaders with little or no training is that Jesus didn’t look to the established leaders around him (77). This assertion rang a little hollow for me. He requires groups to sign a covenant at the beginning of each semester that looks more like a list of expectations than any sort of “rule of life.” Surratt does believe that leaders should be trained. In fact, he’s a proponent of growing future church leaders through small-group leader training. However, he maintains that the training can be done while the leader is learning to be a leader and not prior to becoming a leader. While I’m hesitant to agree, Surratt offers insights into practices for small-group leader development.

One area that I think smaller churches might challenge is the availability of resources that Surratt sometimes seems to assume. Particularly when he covers budgetary issues. Though he’s correct that in order to prioritize small-groups it will require an investment of the church attention and money.

I’m not certain that I agree with Surratt’s observation that “couples groups will always struggle when it comes to being open and vulnerable [and that] most men will not open up in front of their spouse.” (118). However, he is right to raise those sorts of dynamics for churches to consider. He does add sound reasons for having same-gender groups. He has also concluded and my own experience has tended to prove him correct that, “The unfortunate reality, is that most people don’t read anymore. Especially guys” (115).

Surratt’s book will be beneficial for many churches. While no church will take everything he has written as the gospel on small groups, Surratt offers a lot of practical wisdom for churches to struggle with in order to design effective small-group ministry that equips and makes disciples of Jesus Christ for the transformation of the world.

Faith Formation: Baptism of the Lord

This resource is meant to be used in connection with the worship resources for the Baptism of the Lord Sunday (January 12). The underlying questi. . .