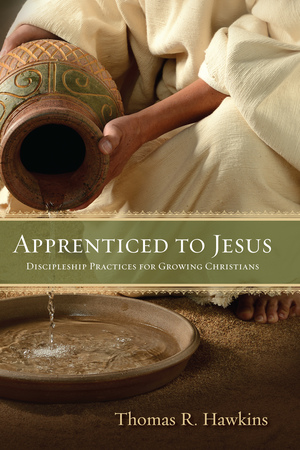 I hear a lot of talk about discipleship. I hear it from pastors. I read books about it. It’s part of the mission statement of the United Methodist Church. Heck, I am employed by Discipleship Ministries. Yet for all the talk about discipleship, rarely do I encounter clarity about what discipleship actually is or how congregations can actually become discipling communities. So you can understand both my curiosity and my hesitancy at reading Thomas Hawkins’ Apprenticed to Jesus: Discipleship Practices for Growing Christians. Would this be another vague book regarding discipleship with overly simplistic stages and systems for disciple making?

Instead of sticking with the more traditional (and often ubiquitous) word “discipleship,” Thomas asserts “apprentice” is a better translation for the biblical idea of discipleship. For Hawkins, this is true primarily in being apprenticed to Jesus, but also in being apprenticed within a discipling community. Hawkins seeks to shift us beyond learning solely for information toward learning in an apprenticeship model, where we learn by observing and doing.

I wish, however, that Hawkins would have stuck with what I took to be his thesis at the end of the first chapter when he states, “Jesus calls a community of disciples who will do what he did - heal, announce, and teach.” I felt a bit let down that he didn’t pursue Jesus’ apprentices as those who heal, announce, and teach. Instead, Hawkins structures the book around the discipleship attributes of apprentice, witness, and freedom.

By focusing on an apprenticeship model over a knowledge-based understanding of discipleship, Hawkins not only shows the weakness of Sunday school models of discipleship, but also cautions against small groups as the simplistic, trendy solution. About the still prevalent Sunday school model, Hawkins is correct to point out that it “relies on individualistic and consumerist assumptions about adult learning” (113). Hawkins then notes how some small groups are not much different from Sunday school because they too can be based on modern educational pedagogies (101 style classes), have vague goals, and fall into the same cultural assumptions as Sunday school.

Hawkins describes discipleship as a journey with four stages: inquiry, call, growth, and maturity. He uses a couple of different images, most notably that of the journey from seed to harvest, to get at the process of discipleship. He also shows how discipleship corresponds to the more traditional Wesleyan terminology of prevenient, justifying, and sanctifying grace. While his attempt is more than a nod to Wesley, my guess is many will wish he had covered this in more depth.

Thankfully, Hawkins’ book is not vague or overly simplified. He gives helpful images, explains his understanding of discipleship, spells out what growth as a disciple looks like. Additionally, he provides valuable illustrations, charts, and structures for church leaders’ reflection.

In the end, Hawkins spells out discipleship in a Wesleyan way better than most. I am often skittish when it comes to making charts and stages regarding the divine/human relationship that forms discipleship. Hawkins acknowledges this as well: “It is important to remember that the flow of phases and practices of discipleship formation is neither linear nor sequential” (106). Hawkins is able to blend biblical resources, research, and practical advice and charts useful for church leaders. He combines describing the process of discipleship (where the book excels), a process for churches to help implement discipleship, and assessment of discipleship in a readable format. For readability, practical wisdom, and some Wesleyan emphasis, Apprenticed to Jesus can be a helpful start in strategizing for discipleship making.

Small Groups Help the Church Live Out the Baptismal Covenant

By Steven Manskar and Scott Hughes. . .

The Shape of Discipleship

The included diagram illustrates the shape of the Christian life. Christians are cross-shaped people living cross-shaped lives. The cross corresp. . .

One way to image this integrated, interrelated system of small groups we could call “grace groups.” Though a variety of language could be used, t. . .