Discipleship Ministries | Why Should United Methodists Have a Season…

Home Blog Why Should United Methodists Have a Season of Saints?

Why Should United Methodists Have a Season of Saints?

Bonhoeffer as Martyr
In 2008, The General Conference of the United Methodist Church passed a non-disciplinary resolution recognizing Dietrich Bonhoeffer as a "modern day martyr for the cause of Christ." That this resolution was approved is certainly understandable because as the author of the resolution suggested, Bonhoeffer "rose above our basic human instinct to proclaim a love that is worth dying for." However, this action of the General Conference also prompts an important question from us as United Methodists: So What?

What does it mean, if anything, for United Methodists to confer the status of "martyr" on someone? I would answer that part of the answer to this question relates to the reception of such an action. Essentially, how does recognizing Bonhoeffer as a martyr affect weekly worshiping United Methodist Christians?

If the rightful intent of the Resolution was to lift up Bonhoeffer as important exemplar of the Christian faith, where are United Methodists exposed to such an exemplar?

Martyrs and Saints
Before we answer this question, you may be asking the question, "The General Conference Action was about martyr status. Aren't we are talking about saints?" The reason that the Bonhoeffer resolution has importance for the "Season of Saints" is that the two are intimately related.

Essentially, a martyr can and usually is understood as a saint, but a saint does not have to be a martyr.

The development of the early church's understanding of saints developed out of their experiences of martyrdom. "Martyr" literally means witness, and those who gave their life because they confessed Christ as a Lord were understood have received a special "Baptism" by blood. Therefore, for The United Methodist Church to proclaim someone a martyr is, in many ways, to recognize them as a saint, a witness, an exemplar.

Reception
We now return to the "so what?" question. If the General Conference's action simply named Bonhoeffer a martyr, but Bonhoeffer's example never makes it into the worshiping life of United Methodists, who might be edified by their connection to him in the Communion of Saints, what is the point? A well-known principle in the realm of ecumenism is that any action of the church ultimately must be received by the faithful.

Up until now, there have only been a few resources for those interested in trying to help United Methodists revive a deeper sense of our connection with the Communion of Saints, most notably the helpful sanctorale, For All the Saints: A Commemoration Calendar for United Methodists, by the Order of Saint Luke. However, the challenge still remains even with such a good resource because so few United Methodists have had the opportunity to engage it.

The "Season of Saints" being proposed enables this kind of work to be brought into the weekly worship life of United Methodists who might otherwise never encounter many of the important figures that OSL names. Further, it may lead to a larger consideration of an official sanctorale for United Methodists, in accordance with the Evangelical Lutheran Church in America, with whom we entered into full communion, as well as the The Episcopal Church, with whom we are in interim eucharistic sharing.

A larger consideration would be the possibility of more voices entering into the conversation. Such conversation might ultimately be able to come under the official voice of the General Conference. After all, the major question that revolves around OSL's work is teaching authority. Who is the judge of such work?

Further, as Geoffrey Wainwright has noted in his article "Wesley and the Communion of the Saints," to recognize the saints of other our brothers and sisters is a critical ecumenical move that will draw us more deeply into relationship with Christians in other communions (in Methodists in Dialogue, p. 248). To recognize a saint named in another communion can be an avenue for United Methodists to engage and receive the ecumenical work being done at the General Church level. 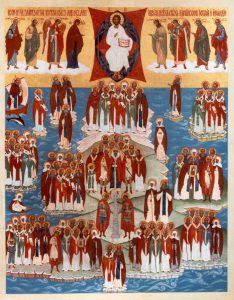 For the General Conference to declare that Bonhoeffer is a martyr may very well be an important step in that direction, and this "Season of Saints" may help to further the reception of such an action. Ecumenically, this is significant because Bonhoeffer is on the sanctorales of both the ELCA and the Episcopal Church. I believe it will be significant for me to name that the General Conference has officially named Bonhoeffer as a martyr when I celebrate him during the "Season of Saints" in my own congregation.

Therefore, I invite you to consider joining in on the "Season of Saints." And for those who might want to raise objections to such activity, I leave you with a final rebuttal from John Wesley,

How superstitious are they who scruple giving God thanks for the lives and deaths of his saints!
(From Wesley's Journal, All Saints Day, 1756)

Note: A large share of the research for this blog came from my Th. M thesis, Methodists and the Communion of Saints.