Discipleship Ministries | What Do We Save? (Part 1) 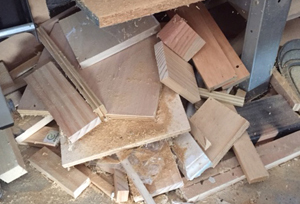 My Fourth of July weekend was spent working on a house project. Before that engenders any pity from the reader, let me admit that there is nothing I would rather do on a long weekend. I love house projects. We took a wall in our den and used distressed and stained boards to make a great accent wall, and we are very happy with it.

So after it was done, it was time to clean up the garage (my workspace) so we could get the car back in there. There was lots of sawdust, scraps of wood, leftover screws, pieces of unused wire, swapped out electrical outlets, and switch covers. In the process, I came to a realization: I save everything.

Small scraps of wood can come in handy, you know, when you need to prop something up. The long slivers of wood that come off the table saw can be used as shim when you need them. I spent 15 minutes pulling little pieces of wire out of the electrical outlet that I took out of the wall to put a new, custom color outlet in. So I put the old one in a drawer in case I need it someday. And the plastic covers for the outlets: We might need those someday.

Here’s the confession: I am the youngest child of parents who grew up during the Great Depression. My Dad never threw away a paintbrush in his life (and this was before he discovered latex paint).

Here’s the confession: I am the youngest child of parents who grew up during the Great Depression. My Dad never threw away a paintbrush in his life (and this was before he discovered latex paint). He would put the brush in a jelly jar with about an inch of turpentine, let it sit on his workbench while the turpentine evaporated into a gummy mess that welded the brush to the jar, then just pushed it to the back of the workbench. My mother had a shoebox, and written on it was “String Too Short to Save.” She never in her life threw away a plastic margarine tub. It was like a religious thing.

Now I know in my heart of hearts that when a new project comes our way, I will go to Home Depot with my list; and if we need an electrical outlet, I will probably pick up a new one. Even though I will think I have one somewhere around my workbench, it’s always good to have another, you know.

So the saving of things is not really logical, and it’s certainly not the most economical use of time and energy. That’s not really what it is about. I think it is more of a spiritual decision than an economic decision.

I’m not a product of the Depression; and I can afford to buy new wood, new electrical outlets, and new spools of wire. However, I was mentored by people who lived through scarcity, who lived through scrap metal drives, and who grew up before the world became so obsessed with making everything disposable. So saving something – and even better, putting something that might have been thrown away to use – that has a spiritual quality. It honors what I learned from my long-departed parents. And I think it honors God, the source of all the blessings of my life, and the architect and creator of this amazing world that sustains us!