Discipleship Ministries | The Sporulation of Bacillus Subtilis: A…

Home Blog The Sporulation of Bacillus Subtilis: A Parable

The Sporulation of Bacillus Subtilis: A Parable

The state of much Christianity in North America, to what shall we compare it, or with what parable shall we describe it.

It is like a certain bacterium called Bacillus subtilis, one of the most common bacteria on our planet...

This bacterium belongs to a special type of bacteria that has formed a special way to preserve itself for the future should adverse environmental circumstances come along. It sporulates. That is, it changes its physical form and how it functions dramatically, from a "normal" state where it reproduces by normal cell division to a "spore" state where it sort of "circles the wagons," creates a hard shell around itself, and essentially goes dormant until it receives a chemical signal from the environment indicating it's safe to "wake up," dissolve the outer shell, and resume its "normal" state. A "spore" can stay in this state, depending on the circumstances and the type of bacterium, for weeks, months, years-- some even decades, centuries or more!

Now most bacteria of this type, when they enter the spore state, "sporify" the entire cell. That is, the entire cell turns into a spore. But Bacillus subtilis does something a bit different. It divides its genetic material in half, reproduces a copy of the other half, and then moves half of that material to one end of the cell. Then it forms a septum (a dividing wall) to close off that end of the cell. Then it sort of pulls that end of the cell back into itself, and hardens a wall around it, creating a spore on the inside of the cell, as in this photograph.You could say it becomes "pregnant."

But before it actually begins this process it does something else, something that only a very few other bacteria do. It engages in chemical warfare. It projects from itself two chemicals. One of them stops other bacteria of its type from starting the sporulation process. The other one dissolves (lyses) the outer cell wall. 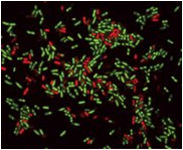 So in this photograph, you see the results. The green bacteria are all alive. But the red ones were killed by the lethal chemical warfare mix. 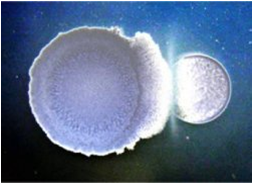 But there's something even more peculiar about this bacillus, one of the most subtle the Lord our God has made. After it kills off the other bacteria around it, including many others of its own kind, it moves over to them and begins to eat them. Yes, Bacillus subtilis is not only a sporulating bacterium. It is also a cannibal. The bacterium on the right in this photo is in the process of devouring the one on the left, able to do so because its outer cell wall has been compromised thanks to the chemical warfare of efforts of the first one.

It does this so the "mother cell" can "bulk up" and have the energy it needs to produce its "baby" spore and protect it for a while. Then the mother cell itself "lyses" (dissolves) and the "baby spore" lies dormant for as long as it needs to-- up to many years.

Whoever has ears, let them hear...

(And, if you want to see a video about the sporulation process of this clever bacterium, here's one from one of the world's experts on it!).