Reflections from Visit to Honduras Mission

"See, I am sending you out like sheep into the midst of wolves; so be wise as serpents and innocent as doves.” (Matthew 10:16, NRSV) 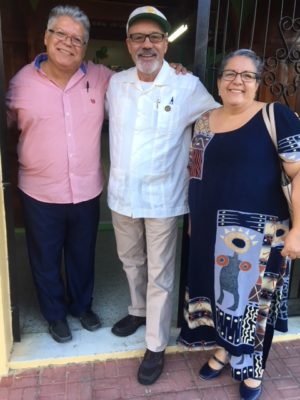 From 1998-2003, while serving as an Executive for Global Ministries, I was involved in then named, “United Methodist Mission Initiative in Honduras.” From 1999-2003, I served as the Regional Executive for Honduras. In 2002, the Initiative became an official Mission of The United Methodist Church. Bishop Elías Galván was named as Episcopal Supervisor for the Mission in 2003. In May, 2003, I made my last trip to Honduras for Global Ministries and Bishop Galván made his first trip. This month, at the invitation of Bishop Galván, I returned to Honduras for the first time since 2003 as part of a cooperative effort of Global Ministries, the National Plan for Hispanic Latino Ministry, The United Methodist Mission of Honduras, and Path 1. The following is an executive summary of my visit. A more detailed report will be posted online.

Path 1 was invited to assess the ministry in Honduras as part of a plan to better equip laity and clergy for church multiplication. The Honduras Mission has effectively multiplied churches through a “Mother Church” model centered at the Danlí Central Church, the first established UM church in Honduras. Path 1 was asked to assess their model as part of a longer-range goal of developing a strategic plan for planting new faith communities.

During the trip, which took place from September 8-14, 2018, we visited with laity and pastors from 21 of the 22 churches of The United Methodist Church Mission. The one church not contacted, in Tocoa, was receiving a US volunteer in mission team during the same time and was unable to attend our meeting. We went to listen deeply to church leaders on the ground so that we could learn how best to support their efforts to make disciples of Jesus Christ for the transformation of the world.

The Rev. Pablo Mora, Superintendent of the Mission, and his wife, Claudette, hosted me throughout the trip. Rev. Mora previously served as Bishop of the Methodist Church in Paraguay. In Paraguay, Mora also served as the distributor of El Aposento Alto, the Spanish language edition of The Upper Room. The newest church planting effort, located in Río Lindo near San Pedro Sula, uses El Aposento Alto as the main content of house group meetings as they work on creating a new faith community.

Most people in Honduras live in extreme poverty (63% of the population per the World Bank). Gangs (called “Maras”) rule neighborhoods. There is a culture of violence and corruption rampant throughout the country. The United States Department of State has issued warnings about traveling in Honduras, which has discouraged UMVIM teams from visiting. Whereas from 2004 to 2015 as many as 30 teams visited a year, 2018 has seen about 12. Partnerships with US United Methodist Churches have helped build the infrastructure of United Methodism in Honduras (church buildings, clinics, Mission Houses, parsonages) and provided health and education services.

The culture of corruption has infected the church in isolated circumstances where pastors have absconded with funds. Thus, it is a challenge for US United Methodists to discern whom to trust. We are challenged to be as wise as serpents and as innocent as doves. We US-based United Methodists must also practice the first rule of life promoted by John Wesley: to do no harm. Stories abound with well-meaning VIM team members doing harm by giving pastors favors or leading them into temptation by entrusting them with large sums of money for programs in their area. It is hard not to be moved by stark poverty, perhaps harder to channel resources in a responsible manner.

Superintendent Mora and his wife, Claudette, both Global Ministries missionaries, drove me to three key regions in the country: Danlí, Tegucigalpa, and San Pedro Sula. At each listening session, laity and pastors told the stories of their churches, including celebrations and challenges. Some, now in existence for 20 years, told of stagnation. Others, especially around new initiatives in San Pedro Sula, celebrate new church construction, ministry with gang members, social outreach to school children providing scholarships to buy uniforms, shoes, backpacks and supplies, and periodic health clinics.

We listened to those involved directly in the Honduras Mission and we shared information about the work of Path 1. In all three areas we visited, we invited the groups to consider further conversations with Path 1 in which a member of Path 1’s team would join their meeting virtually. Here are the first steps towards such an accompaniment by Path 1 with the Honduras Mission:

Rev. Roberto Peña, pastor of the ‘Mother Church’ in Danlí, commented that it makes more sense to form District teams rather than one national team because distances are too great to bring people together nationally.

An additional need was articulated in each region: training laity. There is a need to train laity in the ways and ethos of the Wesleyan/Methodist heritage. Resources, such as Path 1’s LMPN curriculum, could serve as the basis of a contextualized curriculum that would meet this need.

Path 1 and the US church planting movement could learn lessons from The United Methodist Mission in Honduras. Here are notes on these learnings:

For more information, request a copy of Doug Ruffle’s detailed report and access the following resources:

Daniel Alberto Trujillo, “The Church on the Other Corner: United Methodist Mission in the Honduran Context,” found 9/17/18, https://www.umcmission.org/Find-Resources/New-World-Outlook-Magazine/New-World-Outlook-Archives/2015/May/June/0630umcinhonduras