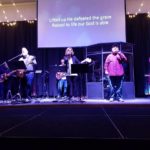 There is a uniquely sacred excitement that happens when a church begins to exist beyond its walls. Where the people inside make a commitment to be about the people outside first and the building second. There is nowhere that this is displayed more than at Huntertown UMC. Ten years ago, members of the congregation began to dream about meeting outside of the church walls in a location that better reached their community. The location that houses Huntertown UMC was landlocked which left little, logistically, for growth to happen. They began praying and searching, only to purchase land about a mile and a half away from the original church property.

The community that Huntertown UMC serves is ripe with harvest – a booming area with life, new homes, new schools; growth in every direction. A traffic study led them to discover that 3,000 cars drive past the location where they purchased land 10 years ago. Three-thousand lives that could be impacted if they chose to leave the safe zone of their 4 walls and venture into creating a second campus that God would use to reach their city.

Ten years later, after 8 jam-packed months of planning, their second campus came to life on March 5, 2017. The lay leadership that helped launch the campus would say that the Spirit’s presence in that place that morning was outstanding! Expecting things to go wrong, as we all do when trying something new, they witnessed a smoothly-run morning that was full of praise and worship as they stood as witnesses to the testament of God’s faithfulness.

“You could sense the energy the morning [of the launch] of the new service as soon as you approached the LifeHouse Campus. Cars streaming into the parking lot, greeters welcoming guests as they entered the building, 300 people worshiping together and praising God, 80 additional kids in a children’s ministry,” said Ed Fenstermacher, Associate Director of Church Development.

He continued, “Lots of energy, excitement, and a sense of God’s presence! I’m so glad Church Development could be a part of helping Huntertown UMC prepare for that day. Our prayers are with them.”

While not every new faith community goes off without a hitch, here are some of the things Huntertown UMC did as they prayed and prepared to launch a second campus:

“Being missional in 21st century Indiana means reaching those who are like sheep without a shepherd in new and creative ways. This endeavor is one way to be missional to reach those who need to know our Savior, Jesus Christ,” commented Dave Neckers, Conference Superintendent serving the Northeast District.

The launch of Huntertown UMCs LifeHouse campus beckons each of us to answer the question – what are we about? Are we about a worship service, a building, our community? Will we choose to be about those living outside our walls over those existing within? Church development is for all of us, for healthy faith movements all throughout Indiana. Learn more about the ways Church Development can come alongside your congregation.

Do you have a People Story to share with us? Have you or someone you know been part of a new church or ministry in The UMC? We'd loved to hear from you. Just contact us at [email protected].

As I anticipate celebrating Advent and Christmas this year, I am reminded of the story of Steve Chung and how he brought a whole new meaning of t. . .