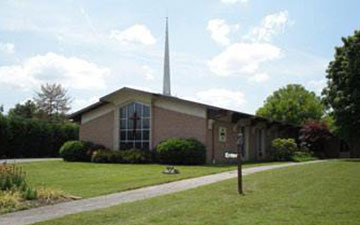 I knew Rev. Buzz Trexler was enthusiastic about the new formatting for Discipleship Ministries worship resources. Buzz is a member of my conference, a Facebook friend, and when he has questions, comments and contributions regarding our worship resources, he contacts me. Recently I have seen him using our graphics and taglines to promote what is coming up on Sunday mornings in worship at “The Meadow” as it is sometimes called. And so, during a private message exchange a few months ago, I asked Buzz if it would be okay with him if I stopped by sometime to observe how his congregation is adapting our resources for a small church in Tennessee.

I enlisted my husband to accompany me, and we set out on the thirty-five minute drive down to Green Meadow United Methodist Church. We arrived to find a lovely building surrounded by a spacious parking lot, located in a middle-class, older residential neighborhood near the Knoxville Airport in the bedroom community of Alcoa. We followed another worshiper towards the entrance, coming into the sanctuary about five minutes before worship was scheduled to begin. I said hello to Buzz and introduced him to my husband, and we proceeded to sit down in the bright, sun-filled sanctuary. As we found a place in a pew we wondered aloud if we were sitting in someone’s spot. Thankfully, if we were, no one alerted us. The congregation was welcoming and gracious.

I asked Buzz if it would be okay with him if I stopped by sometime to observe how his congregation is adapting our resources for a small church in Tennessee.

I began perusing the bulletin and immediately recognized several songs we had recommended for the service. The church provided a bulletin insert for two songs that were not in the two hymnals provided in the back of the pews (The United Methodist Hymnal and The Cokesbury Hymnal). A screen was located on the right side of the chancel. On the screen a countdown clock was visually counting down the minutes and seconds to worship. As the clock numbers descended the number of people in the sanctuary grew.

An extremely talented local musician served as both the pianist and the song leader. This man led the congregational singing from the piano.

The congregational song took us on a journey: we sang a traditional hymn, a praise chorus, two contemporary praise songs, a traditional Doxology, and closed with a new take on an old tune. On the screen, Buzz had created interesting visuals to accompany us in the spaces between the songs and prayers.

Two worship leaders made the scripture lesson come alive, as they played the roles of narrator and Jesus, while we, the congregation took on the voice of the Samaritan woman at the well. As we heard the scripture lesson read we were led to sing the chorus of a popular contemporary praise song which was interspersed through the performance of the Gospel lesson. It was engaging and easy to participate, even for my husband who was not previously familiar with the worship order or the resources our team had created.

Buzz preached an excellent sermon. He drew some ideas from the sermon notes provided in our resources, but drew also from other resources he had consulted, and offered a moving testimony to his own faith experience. Following the sermon, we were invited to a time of response and reflection as we listened to the music leader perform a contemporary song entitled “Beautiful Things,” by the Christian songwriter Gungor. (Watch a video of this song from Ginghamsburg United Methodist Church here.)

One of the highlights of the service was sharing in Holy Communion. I was thrilled to be at the Lord’s Table on a third Sunday of the month! Green Meadow celebrates communion twice a month, on the first and third Sundays. I enjoyed the opportunity to receive the bread and cup, as well as the alternative setting for the Great Thanksgiving, provided through Discipleship Ministries Worship Resources, that coordinated with the other prayers, the songs, and the sermon.

Of note especially to my husband were the Prayers of the People and Prayer of Confession. He was moved by the global scope of the prayer, something he does not experience in the worship service he regularly attends, where the prayers are often limited to the “joys and concerns” of the immediate community. Buzz covered all the bases by adapting the Prayers of the People and the Prayer of Confession provided from the worship resources for his own context. He added a time for individuals to lift up their prayers and concerns, and then gathered those prayers into the final part of the corporate prayer. Some of the prayers lifted up by the people in the congregation were about local friends and family, but others were about wider community concerns. There was even one that could be construed as politically partisan. I was very pleased to hear the congregation at Green Meadow praying for each other, for the world, and for all of God’s children.

I was also pleased to sing an unfamiliar lyric set to a familiar tune with this congregation. This is something that is so easy to do, and yet so often overlooked as a possibility by congregations of all sizes. In this case, we sang Sylvia G. Dunstan’s lyric, “Go to the World” to the tune SINE NOMINE, probably most familiar to people as the tune to which we sing “For All the Saints.” Dunstan’s lyric was a perfect ending to the service. We were sent forth as baptized disciples for the work of preaching the cross, living God’s redeeming grace, and following in Christ’s way.

I have heard a few folks suggest that what we are producing may not easily adapt for smaller churches or in rural settings. From what my husband and I experienced at Green Meadow, I would say this is not true.

I have heard a few folks suggest that what we are producing may not easily adapt for smaller churches or in rural settings. From what my husband and I experienced at Green Meadow, I would say this is not true. Certainly each congregation will need to do the hard work of sifting through what can work for their context, and adapt things as needed, but we experienced faithful, thoughtful, moving worship in this gathered congregation of less than fifty people. Thank you to Rev. Buzz Trexler and the congregation of Green Meadow United Methodist church for an extremely well-done Lord’s Day service, created in part from the worship resources provided by Discipleship Ministries.

During 2017 and 2018, on weekends when she is available, Dawn Chesser would like to visit churches who are using Discipleship Ministries worship resources in their local congregations. Her plan is to visit churches within approximately 100 miles of her home near Knoxville, Tennessee, who are interested in participating. She will be visiting Sunday morning worship to observe how churches in different settings and of different sizes are using and adapting the resources for their local ministry contexts, and blogging about her experiences. If you are interested in having Dawn visit your local church, please email her at [email protected].