Discipleship Ministries | Can We Still Talk about... Judgment?

Home Blog Can We Still Talk about... Judgment?

Can We Still Talk about... Judgment? 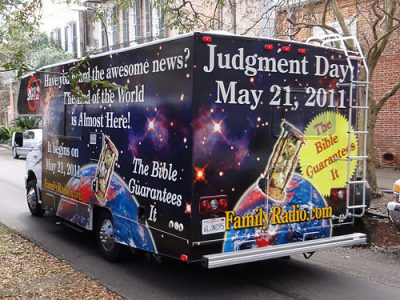 It's getting harder, isn't it?

With the hoopla over what became the "Rapture Fail" this past weekend, it may be difficult even to confess words Christians have repeated in worship for at least sixteen centuries:

"We believe that you will come and be our Judge" (Te Deum, ancient Christian hymn).

"He will come again to judge the living and the dead" (Apostles Creed).

"He will come again in glory to judge the living and the dead, and his kingdom will have no end" (Nicene Creed).

Wait. Isn't all of that a lot like what Harold Camping said?

Yes. It is. And Camping himself is convinced that Judgment Day still did begin, though spiritually, on May 21, 2011. It's just that none of the other things he believed would happen that day-- like earthquakes worldwide releasing long dead bodies from tombs and living Christians being lifted off of the planet to meet Christ a mile or two up in the sky-- accompanied it. Camping still claims the earth will come to a complete end on October 21, 2011. What won't happen is any sort of "tribulation" between now and then. Instead, the earth itself will be dissolved on October 21, making way for a new earth to be created and inhabited by the redeemed.

As October 21 nears, and then passes, I suppose we can expect another media frenzy.

But where does that leave those of us who also confess that Christ will come again to be our Judge?

Or do we even still believe that?

John Wesley on the Effects of the Judgment of Christ

John Wesley originally preached a sermon entitled "The Great Assize" at the Assizes for the opening of a day of trials in Bedford, England in 1758. It's one of the Standard Sermons that comprises part of the doctrinal standards of The United Methodist Church.

There, Wesley boldly proclaimed that as "awful" (which then didn't mean "really bad" but more like "awe-inspiring") as the solemnity of the proceedings of that court on that day would be, even more awful would be the day when all stand before the judgment seat of Christ.
There, too, Wesley offered a list of the things that would happen before, during and after the Judgment. Leading up to it, terrible earthquakes all over the earth will occur, the dead will be raised from their graves, the seas will give up their dead, and the angels of the Lord will gather up the elect, placing them to one side (sheep) and leaving the others to the other side (goats) for the final judgment by and before Christ. Wesley has multiple citations from scripture backing every claim he makes here. (Sound familiar?)

So wait. Harold Camping wasn't just drawing on late 19th century evangelical, fundamentalist pre-millennialism or his own flights of fancy with the Bible? No. Many of the specifics of what he predicted-- save for the date-- can be found right here in this sermon by John Wesley-- a sermon we claim as bedrock for our doctrine.

So what do we do with that?

Perhaps what Wesley did rather than what Harold Camping has done.

Camping's prophecy appears to have been simply bad news for everyone but "the elect." Judgment Day was coming on May 21. You couldn't do anything about that. You couldn't even really prepare for it. Anyone not already in the elect was simply doomed. Too bad for them. (I'll admit this gets a bit confusing-- I don't think Camping presented this consistently-- at other times he seems to allow a lot of different people, including people of different religions who followed Jesus without knowing his name to be in that group-- but it's one theme he did present in the lead-up to May 21).

Wesley's approach was different. He was just as confident as Camping that the Judgment would come, though he certainly agreed with Jesus (instead of Camping) that no one did or could know exactly when. But the news of this judgment for Wesley was really good news-- and not just for the "elect" by and by, but for everyone, here and now.

As Wesley put it:

Had all men a deep sense of this, how effectually would it secure the interests of society! For what more forcible motive can be conceived to the practice of genuine morality? To a steady pursuit of solid virtue? An uniform walking in justice, mercy, and truth? What could strengthen our hands in all that is good, and deter us from all evil, like a strong conviction of this, "The Judge standeth at the door;" and we are shortly to stand before him?...

"Wherefore, beloved, seeing ye look for these things," seeing ye know he will come and will not tarry, "be diligent, that ye may be found of him in peace, without spot and blameless." Why should ye not? Why should one of you be found on the left hand at his appearing? He willeth not that any should perish, but that all should come to repentance; by repentance, to faith in a bleeding Lord; by faith, to spotless love, to the full image of God renewed in the heart, and producing all holiness of conversation.

Perhaps one might say that Camping had or seemed to proclaim a "deadly hope," while Wesley had a "living hope," a hope for the restraint of societal evils generally, and a hope for the full salvation of all who would receive it by faith and continue to grow into a "spotless love, the full image of God renewed in the heart."

Contemporary Challenges to "The Judgment"

First, there's the whole notion of there being any actual, historical "Second Coming" in the first place. That belief itself has been under heavy assault first by skeptics (such as Voltaire and Thomas Jefferson) in the early years of the Enlightenment, but increasingly within significant parts of the academy, clergy and people of the churches themselves since the late 19th century. If these haven't simply scoffed at the idea, they've at least reduced it to a metaphor, much as some scholars and clergy in the 20th century have sought to evacuate any notion of an actual bodily resurrection of Jesus.

Second, there's the more specific assault of process theologies and philosophies, which posit no "end" either to God or to history, per se, but rather an eternally evolving "process" of give and take in which humans are both co-creators and co-evolvers, if you will, with God, whatever we understand God to be.

Third, there's the challenge of notions of "emergence" itself-- closely related to but not always directly associated with process theologies per se. If Whitehead and Cobb are the pioneers of "process," Henri Bergson might be the philosophical pioneer of emergence, of everything being in more or less constant flux and change.

Fourth, there's science and scientism. Science itself cannot speak about such things as an "end" of the universe, much less a God. It is necessarily atheistic in its methodology. That's not a fault, but a feature. Scientism is a description either of science over-reaching into making proclamation about things beyond its actual, self-limited capacity to speak (if it's following its own methods), or other non-scientists committing scientism (the claim that the only things that are real at all are those that can be proven or demonstrated by scientific methods) in other disciplines.

So, here's the deal. Science deals with process and emergence all the time. These are very helpful models for trying to describe what scientists observe about the physical universe. And as scientific ideas have become more widely taught and propagated to everyone-- face it, your or your neighbor's fifth grader may well know more and regularly use more of the findings of science than Isaac Newton did!-- thinking scientifically about most things, including religious claims, tends to follow. That's not a bad thing! It can be quite a good thing!

Except for scientism. Because here we have a serious problem. Until the advent of quantum physics, and to a large degree despite it since then, science operated by thinking in either/or ways. Either X is the case OR Y is the case. If X is the case, and Y is fundamentally different, then Y cannot be the case at the same time. This led to a serious war and often divorce between scientism (if not science) and religion beginning in the late 19th century and continuing to this day. The scientism that pervades Western thinking must admit that if the universe is infinite and non-ending, as far as science can tell, then there's no way Christ or any person or being could end and start it over again. Science (scientism!) is right, religion (Christianity) just plain wrong-- if not ridiculous or even dangerous (a la Hitchens and Dawkins).

Quantum physics didn't alter this condition. It only added another layer of difficulty. Because now the "uncertainty principle" that leads to only probabilistic outcomes at the very small and very large scale in physics and cosmology gets applied quite frequently (and illegitimately-- in a "scientism-istic" rather than a truly scientific way) to relativize all truth claims in all realms. or at least to limit the possibility of truth in any claim to a very specific cultural, demographic, historical or temporal context. This means in the end there can be no Judge at all, much less the Judgment Seat of Christ.

I raise these challenges to our doctrinal standard (Wesley's sermon) not in any defensive way.

Nor do I raise them to reject our doctrinal standard. (I embrace it!).

I raise them for the real challenges they are, challenges that appear pervasively in our own thinking, even within my thinking about these things.

Can we still talk about Judgment?