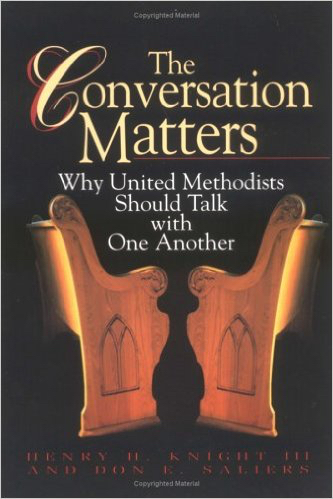 It’s been more than a decade and a half and five General Conferences since Henry Knight and Don Saliers wrote The Conversation Matters: Why United Methodists Should Talk with One Another. Their plea is every bit as, if not more, relevant today as it was when they wrote this book. I don’t think it is a stretch to assert that we, as United Methodists and as U.S. Americans, are more partisan and divided today than we were in 1999. As we look at the 2016 United Methodist General Conference and the way the fall presidential campaigns are shaping up, we need to hear their plea for conversation once again.

The Conversation Matters is a plea for United Methodists of all persuasions to engage in meaningful theological conversations. The purpose of these conversations, for Knight and Saliers, is not to reach uniformity. Rather, because of the Methodist history with Christian conferencing, the authors propose that people of differing sides have sustained dialogues to discern a future together. The book is split into two parts, drawing upon two of Wesley’s conference topics: “What to Teach” explores the necessity of doctrine and its role for John Wesley and for today. “How to Teach” looks at civility as a virtue, the need for dialogue, and the necessity of Christian conferencing. The authors write, “Our proposal is: Christian doctrine matters, but we must learn again to ‘conference,’ and here is a way to proceed undogmatically, faithful to Wesleyan sources” (page 12).

Coming from divergent sides, though not extremes, of the theological and United Methodist spectrum, Knight and Saliers maintain a tension throughout the book. They acknowledge that within the United Methodist Church, the doctrinal differences are real, they matter, and they “require our sustained attention and conversation” (64). The authors attempt to honor a variety of United Methodist positions. Thus, they argue, on the one hand, that, “we must face the fact that many United Methodists drink deeply of the waters of modernity and embrace theological innovation” (57) and, on the other, that, “Discernment…goes beyond the simple repeating of…doctrines in their past conceptual frameworks” (28). As well, they contend that United Methodism is both conciliar (communal approach to doctrine) and confessional (reflect theologically in line with historic doctrines).

The authors discuss “In Search of Unity," which grew out of meetings in the late 1990s discussing the church’s disagreements over human sexuality. They point to a key question underneath the three perspectives they discern from those meetings: “How do you know?” Their exploration and commentary on these approaches is instructive though concise. They conclude “There can be little doubt that United Methodist, like many other denominations today, is divided not just over opinions but over essentials” (52). As grim as their conclusion is, it names the tension that has been all too apparent at the General Conferences since the book’s publication.

They certainly recognize that what they advocate is not easy. They call for civility, dialogue, and Christian conferencing. Being the respected scholars they are, they acknowledge that while calling for Christian conferencing, they are not using that term exactly as Wesley used it. The distinction is that Wesley’s use has to do more with a strategy or “methodical” growth for holiness.

They write, “We will, in short, have to do something that John Wesley neither imagined nor desired: We will have to conference together about the essentials of Christianity and the distinctive doctrines of United Methodism, as well as how we determine what is essential to Christian or United Methodist identity” (57). They also note the need for appropriate tone in giving four characteristics of conferencing: “careful listening, building trust, a context of prayer for all, and getting some distance on our own blind spots and prejudices” (89).

They assert that “civil” yet honest conversation will lead us deeper in compassion and theological conviction. They spend a good deal of time promoting civility as a Christian virtue. While the need to speak with more “civility” is valid, that language seems to be grounded in political terms rather than theological ones. They attempt to merge those spheres, “Civility is one form love must take in our relationships with others, including when we disagree” (64) and “Civility is about respecting and listening to one another. But at its heart is about love.”

While manner and tone of conversation is vitally important to bringing depth and integrity to these sorts of conversations, I am not convinced that “civility” is the best term. Additionally, the focus on civility keeps the book on the level of manners (how) for conversation instead of aim (growth in holiness). They do challenge us, however: “This book calls for deeper listening and speaking that go beyond liberal tolerance or simply civility” (54-55). They also call for “prayerful listening,” truth telling, calling out our disagreements, and “discernment.”

There are other areas where the book and the Courageous Conversations project overlap. For instance, the writers assert, “When we turn from the ‘winner take all’ mentality, to a ‘what can I learn from our disagreements,’ a startling transformation is possible” (86). That transformation is both discerning the guidance of the Holy Spirit and being a disciple who learns.

Much of their book is spent trying to convince us of the the need for having theologically based difficult conversations, which is to be commended. However, there are only a few practical suggestions at the end of the book and a couple of illustrations. The Courageous Conversations project does provide practical resources. But the aim of the book is worthy in that it will take no small about of persuasion to convince those from all perspectives that their voices are needed and that participants will grow through such interactions.

I recommend The Conversation Matters both in terms of its plea, for its rich theological content, and for its attempt to name various doctrinal perspectives. What was needed in 1999 is still needed following the Council of Bishops’ appeal at General Conference.

Find people with whom you disagree theologically. Ask from a posture of curiosity why they believe as they do without offering any rebuttals or critique. Afterward, reflect on “What did I learn as a result of this experience?”

For more about Christian conferencing as a means of grace, read the following article: http://www.interpretermagazine.org/topics/means-of-grace-christian-conferencing