"...the survey shows us verifiable proof that the efforts of our annual conferences to improve our church planting process is yielding positive results."

The survey, conducted in 2015 by LifeWay Research, received responses from 1,200 pastors and new church leaders and focused on 843 church plants started since 2008. LifeWay said the church planting survey was the most thorough in almost a decade.

“I believe the survey shows us verifiable proof that the efforts of our annual conferences to improve our church planting process is yielding positive results,” said Bob Crossman, a New Church Strategist with Path1, a division of Discipleship Ministries of The United Methodist Church. “It also shows that we need to be not only encouraging our existing churches to become stronger and more viable, but we need to be continuing to start new churches and new places the reach new people.” 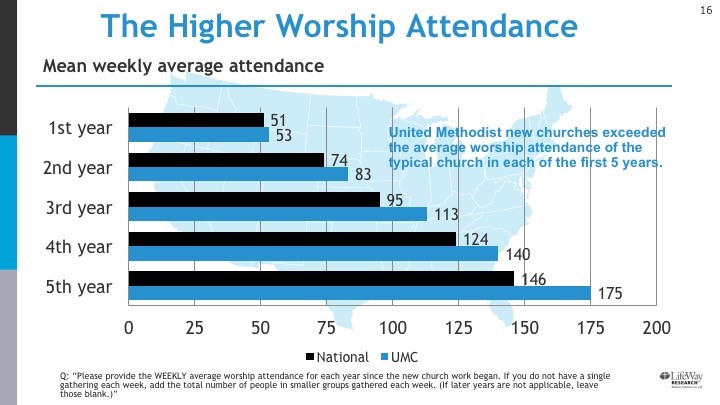 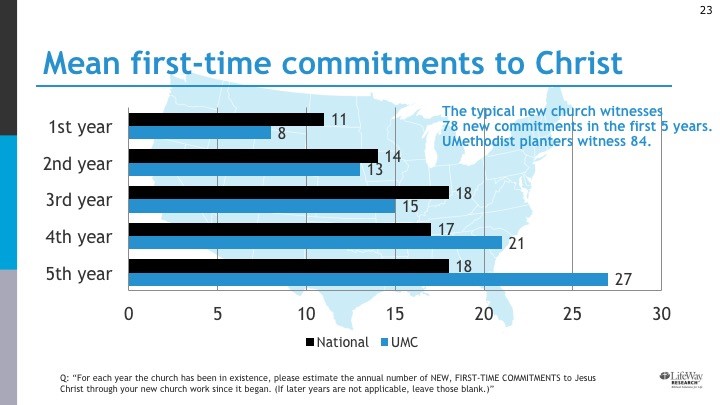 “The third surprise for me is that the United Methodist churches out-performed the typical new church in reaching those who were previously unchurched or unchurched for many years,” Crossman said. “I guess a more common way to put it is United Methodist new churches were not stealing sheep from other churches. We were reaching people who do not have a church background and doing that more effectively than the typical new church in the United States.” 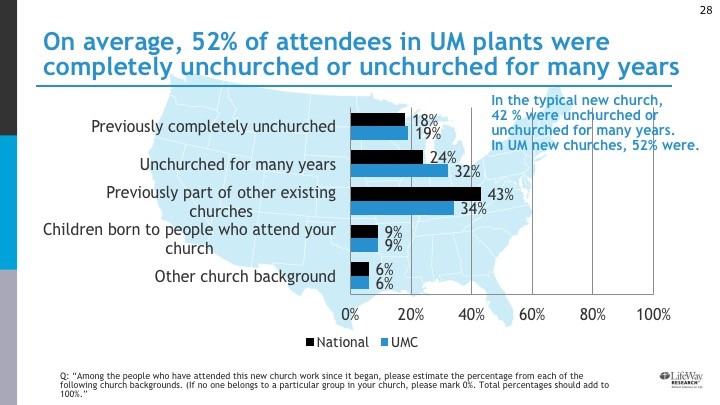 United Methodists need to improve in two benchmarks areas included in the survey. New UMC churches were less likely to become self-sustaining within the first five years. In the typical new church, more than half – 64 percent – were financially self-sustaining by the fifth year, compared to 42 percent for the United Methodists.

The second area that needed improvement for UMC new church starts was multiplying, or giving birth to another new church. In the survey, 22 percent of the typical new churches started a daughter church within the first five years, compared to only 13 percent among United Methodist churches.

“The survey has already begun to help us by revealing key statistically verifiable factors that have a correlation to reaching these five critical benchmarks,” Crossman said. “So as a result, already in our training, coaching and supervising, we are able to lay before our potential planters and actual planters in the field factors that are worth them testing in their mission field to see if they will yield results.”

Every mission field is different, and regions of the country are also different, Crossman said.

“But if there is a particular activity that has yielded fruit nationwide – that resulted in an amazing benchmark – then our planters need to be testing that in their mission field,” he said “Now we have statistically verifiable factors, rather than just random observations or hunches about what might be effective.”

Over the past ten years, UMC annual conferences have learned the importance of accessing the potential planters' gifts and graces before sending them to the mission field, Crossman said.

“Beginning in 2016, the additional significant factors revealed in this survey have the potential to help our new church efforts reach higher levels of health and vitality, making more disciples, more diverse disciples, and more younger disciples for Christ,” he said.

For a copy of the full survey, email Candace Lewis, Executive Director of Path 1 New Church Starts, at [email protected].