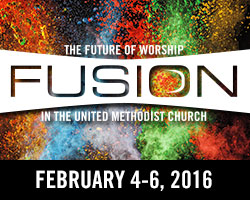 “Fusion brought together leading-edge practitioners from across the country and leaders and professors in the academy so that we are not moving ahead simply based on academic ideas or what seems to work in some contexts, but we have really started a conversation,” said Taylor Burton-Edwards, Director of Worship Resources at Discipleship Ministries. “We've created a greater dialog between the church and the academy.

“What I think the participants in the event saw is how fruitful that dialog is. If we indeed do ground our worship – as creative as we may need to be in our local contexts – in the depth of our tradition, that only makes everything richer,” he said.

More than 400 people attended the sold-out event, which included plenary sessions on the four major topic areas, worship services showcasing a wide range of preaching and musical styles and workshops on topics ranging from technology in preaching to children in worship to copyright and plagiarism issues for preaching and worship.

Dawn Chesser, Director of Preaching Ministries at Discipleship Ministries, said organizers have received many positive responses from participants who attended the event.

“We’ve gotten a lot of feedback from people in smaller churches, who said what they appreciate about the event was learning how to revitalize their worship services by just doing some simple things, like singing different music,” she said. “People want to do things with integrity to the tradition, and I think that’s what they saw there.”

Also unveiled at Fusion were the efforts of diverse group of 10 scholars and practitioners to evaluate the top 100 songs that Christian congregations performed and sang during 2015.

The vetted music was the list of Top 100 songs licensed by Christian Copyright Licensing International (CCLI), the nation’s leading provider of licensing services for churches. The CCLI Top 100 are songs congregations of all denominations used the most, but the list provides no information about the quality of the songs, either theologically, musically or in terms of their use of language for humanity and God.

“Our vetting team did a good job of assessing the songs and rating them according to Wesleyan theology and language and singability,” said Jackson Henry Director of Music Resources at Discipleship Ministries. “Our churches now have a tool to help them select modern worship music that is appropriate according to our Wesleyan heritage.”

Many local churches want help choosing songs that are deemed appropriate and have been through a tested process, in much the same way as the resources in other denominational books, including The United Methodist Hymnal, Henry said. The vetting process will continue as the CCLI Top 100 changes.

Fusion also made more people aware of other resources that the church, and particularly Discipleship Ministries, offers to strengthen worship in local contexts, Burton-Edwards said.

“We showed the variety of worship that we offer, the ability for a lot of it to be transferred directly into local churches with whatever adaptations they need to do it,” he said. “I think it was eye opening, and we wanted it to be.”

The planning process for another event, Fusion 2017, is already underway. To see a complete list of the sessions in Raleigh, go to www.fusionworship2016.org.