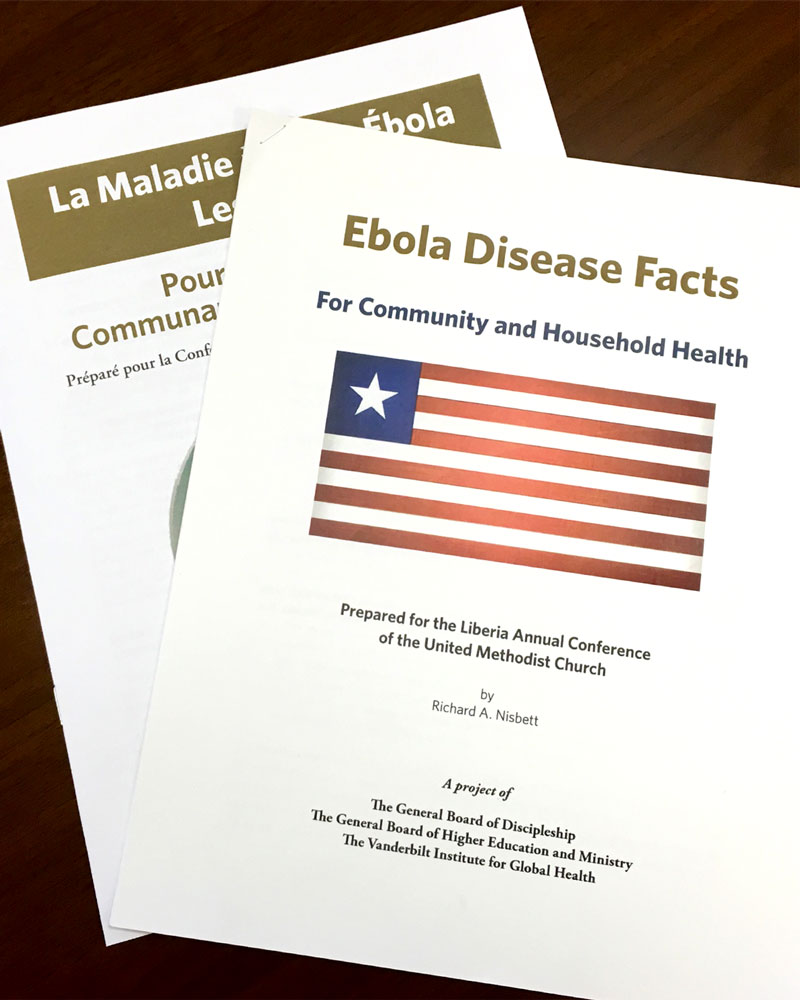 The document was produced in a partnership between Discipleship Ministries and Higher Education and Ministry of The United Methodist Church and the Vanderbilt Institute for Global Health in Nashville.

“The booklet dismissed the fear people had that Ebola was a death sentence,” said E. Julu Swen, editor and publisher of West African Writers, an online publication about United Methodist happenings in West Africa. “That fear was removed.”

The booklet, Ebola Disease Facts for Community and Household Health, was prepared by Dr. Richard A. “Ran” Nisbett, Adjunct Professor for the Institute for Global Health at Vanderbilt School of Medicine. It not only includes information about what Ebola is, where it comes from and how people are infected, but also how people and communities can prevent and control the spread of Ebola.

About 5,000 copies of Ebola Disease Facts were used to train the United Methodist Liberian Annual Conference staff, all 21 district superintendents and more than 700 UM ministers and lay leaders, Swen said. The leaders then used the booklets to address Ebola prevention in their congregations and communities.

More than 200,000 United Methodists in Liberia learned from the training and the booklet that Ebola is not an automatic death sentence, Swen said. Additionally, as many as 100 UM elementary and secondary schools used the booklet, and the booklet was shared with Catholic Charities and the Liberian Baptist Convention.

About 35,000 additional copies of the booklet have been distributed in seven French-speaking African countries. The French version of the booklet was funded by U.S. donors, published in the United States and shipped to Côte d'Ivoire for dissemination.

"Donors from a wide range of churches and organizations are funding this work through contributions,” said M. Scott Gilpin, Executive Director of Fund Development at Discipleship Ministries. “More support is needed to complete the dissemination of the Ebola Disease Facts booklet.”

For information about how to support this effort, go to http://www.UMCdiscipleship.org/international-ministries/how-you-can-help.

The World Health Organization (WHO) declared the end of the Ebola outbreak in Liberia on May 9, 2015, following two incubation periods after the last Ebola patient was buried. However, a confirmed case of Ebola was reported on June 29, resulting in six confirmed cases and two deaths. Liberia was again declared free of Ebola by the WHO on Sept. 3.

In the week of Oct. 4, the WHO reported that no confirmed cases of Ebola virus disease (EVD) were reported in Africa for the first time since March 2014. The most recent transmission of the virus has been geographically confined to several small areas in western Guinea and Sierra Leone. Since the beginning of the outbreak, the WHO said there have been a total of 28,421 reported confirmed, probable and suspected cases of EVD in Guinea, Liberia and Sierra Leone, with 11,297 reported deaths.

Swen, who has served as communications director for the UMC in Liberia, said Liberians found the booklet credible, not only because it contained facts about the virus they had not been told, but also because how they received the information.

“The people believed it because it came from an institution they believe in – the church,” Swen said. “Where I come from, if you want people to follow you, you’ve got to let a pastor talk to them, or you have to let any of their religious leaders talk to them.”

The booklet also let Liberians know that people in other African nations had battled and overcome Ebola, Swen said.

“Our closest neighbor, Côte d'Ivoire, had Ebola before, and they recovered from it. So that booklet built the faith of people in Liberia that this is also a barrier that we can cross,” Swen said. “But before (the booklet), all of that information was not available to anybody. And it was like ‘we are doomed.’ ”

The Vanderbilt Institute of Global Health sought to work with The United Methodist Church because of its worldwide connection of clergy, its publishing teams in affected countries and the E-Reader Project in Africa, said Robin Pippin, Director of Contextual Resource Development and Distribution for the Central Conference Sustainable Resourcing Initiative at Discipleship Ministries.

The existence of publishing teams allowed the booklet to be printed quickly and efficiently in Liberia and Sierra Leone in English, and a small quantity in French in Côte d'Ivoire before the large U.S. shipment of French booklets arrived. The E-Reader Project makes textbooks and reference books available on a Kindle to African seminarians who have inadequate access to resources for pastoral development.

“Vanderbilt Institute of Global Health feels that clergy people and religious leaders in Africa are actually the ones that people look to and trust, for not only religious messages, but messages about health,” Pippin said. “Especially with our publishing teams in the area and the E-Reader Project going to theological students, this seemed to be to them a good channel for information to get it out to people, from religious leaders there that they could trust and believe in.”

The Ebola brochure has been included on all E-Readers in Africa, even those that are used in areas that are not known to have Ebola, as a preventative measure. Currently, there are 800-900 E-Readers in use, and Pippin said the church hopes to have about 2,200 available by the end of 2015.

About GBHEM: As the leadership development agency of The United Methodist Church, the General Board of Higher Education and Ministry’s mission is preparing global leaders for a global church and the world. Every elder, deacon and licensed local pastor benefits from our training and candidacy programs. Many young adults find help in clarifying their vocation and God’s call on their lives through our leadership and discernment programs. Reach us at (615) 340-7383 and follow us on Twitter: @GBHEM.

The mission of DISCIPLESHIP MINISTRIES is to support annual conference and local church leaders for their task of equipping world-changing disciples. An agency of The United Methodist Church, Discipleship Ministries is located at 1908 Grand Ave. in Nashville, Tenn. For more information, visit the Press Center or call the Communications Office at (877) 899-2780, Ext. 1726.