Methodism, in all its roots, has a long history celebrating and recognizing the ministry of the laity.

In the early days of American Methodism, the laity served and maintained congregations between visits of the circuit riders. Today, lay people are the front line of daily ministry at the workplace, in the home and within the community.

Archives suggest the earliest plans for a Laity Sunday beginning in 1928. The first recorded observance of "Laymen's Day" was in the Methodist Episcopal Church, South in 1929. By 1930 the Evangelical Church had begun celebrating the work of laity at the culmination of each annual men’s retreat. (Reflecting the times, these early celebrations focused only on the ministry of men.)

The September 1928 issue of The Methodist Layman reports

...the third Sunday in May [is] Anniversary Day, commemorating the constitution of the Board of Lay Activities by the General Conference, the same to be designated as "Laymen's Day," and strict observance of this day by a lay program in every church, which shall set forth adequately the place of lay activities in the Church and be of inspirational value to the laymen for larger service in the kingdom. 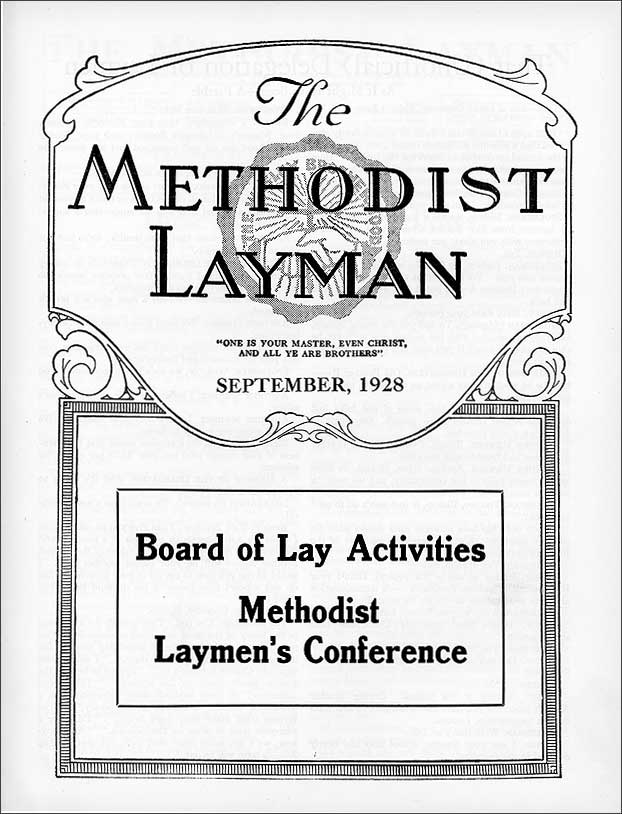 Within two years, the success of the celebration hastened to make Laymen's Day an annual observance.

Once the factions of the Methodist Episcopal Church merged in 1939, the joint General Board of Lay Activities approved Laymen's Day and designated February 23, 1941, as the first United Methodist Church observance. The January issue of The Methodist Layman enthusiastically reports the aim of Laymen's Day as "...to emphasize the place that lay members have in the total life and work of the church."

Laity Sunday is a time to recognize the work and mission of all laity — not only within the walls of the church but in everyday lives.

The excitement about this day of recognition grew. The January 1942 issue of The Methodist Layman includes this entreaty:

Think what this could mean to the church! Forty thousand laymen — lawyers, physicians, teachers, bankers, businessmen, mechanics, farmers and others — speaking on The World Mission of the Church!

The whole Methodist Church will be moved and stirred to action by such a message. ...There are vast possibilities for good in Laymen's Day. It is the prayer of the General Board that every Conference, District, Associate District, Charge and Church Lay Leader and every District Superintendent and Pastor will give wholehearted cooperation to make the day significant in the life of The Methodist Church.

In October 1942 The Methodist Layman recommends the last Sunday of February "be fixed as Laymen's Day throughout the Church" and calls for "serious preparation for this day and...[for] Pastors to give active cooperation."

Mid-20th Century to Today
Laymen's Day is first mentioned in the 1944 Book of Discipline (¶ 1483), where its direction is placed under the auspices of the General Board of Lay Activities.

In the 1964 edition of the Book of Discipline, Laymen's Day is designated as the second Sunday of October. (¶ 1499.3)

…shall be to interpret the role of the laity in the world and to provide laymen with opportunity to witness to their faith in Jesus Christ and their commitment to his mission in the world.

By the 1972 edition of the Book of Discipline, Laymen's Day was renamed the gender-neutral Laity Sunday (¶ 163) but was often referred to as Laity Day until 1977.

Today, Laity Sunday is celebrated the third Sunday of October. Quadrennial themes are set by the Association of Annual Conference Lay Leaders and approved by the board of directors of Discipleship Ministries.

We need the whole Body of Christ as we seek to become more vital congregations who make disciples of Jesus Christ for the transformation of the world!

What are ways that you can celebrate lay ministry more often in your congregation? How can you encourage others in their discipleship?

Laity Sunday celebrates the ministry of all Christians to love God and neighbor. On Laity Sunday (this year, October 17, 2021), we lift up the vo. . .

Laity Sunday celebrates the ministry of all Christians to love God and all people. On Laity Sunday (this year, October 18, 2020), we lift up the . . .

Laity Sunday celebrates the ministry of all Christians. On Laity Sunday (this year, October 20, 2019) we embrace our shared vocation (lay persons. . .