Jack William Hayford (b. 1934) is a native of Los Angeles, Calif. He grew up in the Foursquare Pentecostal tradition, attending L.I.F.E. Bible College (now Life Pacific College), graduating in 1956 and completing his studies at Azusa Pacific University in 1970.

In 1969 he became pastor of the First Foursquare Church of Van Nuys, Calif., which was then a struggling, aging congregation with only 20 members. He was also dean of students at L.I.F.E. and agreed to lead the congregation on a temporary basis for six months.

But after receiving a call to a much larger congregation, he decided to stay with the smaller church in Van Nuys. By 1980 it had been renamed The Church on the Way, and membership was over 3,500.

Mr. Hayford retired as pastor in 1999, passing leadership of the church on to his son-in-law, Scott Bauer. The tiny congregation of the late 1960s is now a leader in the megachurch movement with over 7,000 members.

A prolific writer with at least 55 books, Mr. Hayford has received numerous awards as a pastor and author. He has received honorary doctorates from Oral Roberts University, California Graduate School of Theology and Life Pacific College. Most recently he has served as the fourth president of the International Church of the Foursquare Gospel.

According to the Rev. Carlton Young, editor of the UM Hymnal, Mr. Hayford has composed over 400 hymns, songs and other musical works.

Hymnologist Donald Hustad has the following account of our hymn’s composition: “Author Jack Hayford says that in 1987 while he was traveling in Great Britain he developed interest in the actions and symbols of the royal family, relating them to Christ and his kingdom. We need to cultivate a sense of the majestic presence of God. He is a close friend, by his grace, but he is also the majestic, holy awesome God of the universe and we need constant reminding not to take His royal presence lightly. In this short song we are called to recognize His majesty and then ascribe the glory due His name.” 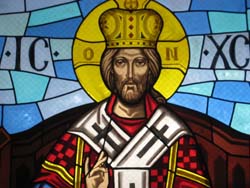 Of course, throughout the Bible—but especially in the psalms—the concept “majesty” and “majestic” is common, especially in the King James Version, the translation most commonly used by Mr. Hayford. Psalm 93:1 is a good example: “The LORD . . . is robed in majesty and is armed with strength.” Psalms 29:4, 45:3-4, 68:34, 96:6 and 104:1 are but a few of the many references using this term.

In “How God Evaluates Worship,” an article published in a series of pamphlets entitled “Survival Guides,” Mr. Hayford describes a theology of worship that sheds some light on his songs: “In my experience, theological discussions about worship tend to focus on the cerebral, not the visceral—on the mind, not the heart. True worship, we are often taught, is more about the mind thinking right about God (using theologically correct language and liturgy), rather than the heart's hunger for him.”

“Majesty” reflects the heartfelt emphasis of the composer. Though one might read in this quotation a slight protest against liturgical worship that focuses on the mind and not the heart, the composer’s sentiment is consistent with his tradition. The author chooses a single theme and wants the singer to feel that theme in the text and the music above all else.

The central theological theme is straightforward: Christ is King, and as King of all, he is the sovereign of all (“kingdom authority”) and his name is to be exalted. The music attempts to convey a majestic tone, especially in the triplet rhythms that contribute a sense of fanfare throughout the song. One can easily hear this song played by a brass ensemble and used as a dignified instrumental processional for a stately gathering.

Although monarchy has never been the political structure of the United States, this metaphor continues to resonate with certain faith traditions as a primary means for envisioning God and Christ. While there is certainly substantial biblical support for this perspective of deity, it is only one of many images offered in the Bible and by hymn writers about our relationship to God.

“Majesty” is now one of the classic songs of the contemporary Christian genre, approaching 30 years of continuous use—a long time for songs in this style.