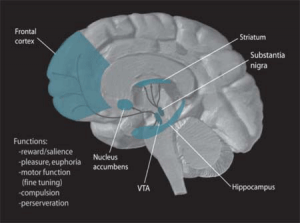 What you are about to read in this and the next post are generalizations about brain chemistry and its implications for worship. What I am proposing here is hypothetical at best. I am seeking to present well-documented lab results on the "science" side of this. But so far, we lack the technology to test the release of neurotransmitters in the brains of humans in real time situations of worship in ways that aren't likely to impinge too much on the act of worship itself.

Dopamine: Getting High on God (or something!)
As you can see from the diagram, above, dopamine is a pretty common and actually critical neurotransmitter. We all need for our brains both to release it in sufficient quantities and be able to use it ("reuptake" it) in certain ways to maintain fluid body motion. Parkinson's disease, notable by tremors and decreased motor coordination, is the direct result of the destruction of cells that produce dopamine in the brain. So we literally need dopamine to walk, write, or do many of the activities of daily living.

When dopamine is released for muscle coordination, we rarely "feel" its effects, in part because the rate of release is relatively slow and steady.

But we actually do feel the effects of dopamine in another of its functions, as a "reward chemical." Anytime we face something that seems challenging or experience something exciting, we may experience a quick (or sometimes not so quick!) "dopamine high." We can get that "high" either through a "burst" of dopamine released in sufficiently high quantities in a sufficiently short period of time, or when dopamine in the brain both concentrates and hangs around longer than usual. Listening to pleasing music or getting three stars in Angry Birds can cause the former. Cocaine use is one known cause of the latter. But either way, it is dopamine that makes us feel anywhere from "really good" to "euphoric" in such cases.

Dopamine is basically good for us, in the right quantities, at the right time.

But we can run into some serious cognitive trouble when the "dopamine reward button" stays in the "on" position too long or too frequently.

Stanford University's research on media multitasking has demonstrated this. The act of "task switching" between two or more media tasks (say, email, working on a document, and a Facebook page) creates enough excitement in the brain that an extra amount of dopamine is quickly released, and each act of task switching releases a bit more. This makes frequent media multitaskers feel good, so good in fact that they believe they are able to give increased attention to each individual task as they switch between them and become better at switching itself. But it turns out practice does not make perfect in this instance. The results of memory and attention testing after media multitasking showed the more people do media multitasking, the more they show impaired attention, memory and ability to determine what information is important and what is not. The effects of this cognitive impairment were measurable for hours and in some instances for up to two weeks after an intense media multitasking session.

There's one more association of dopamine to discuss. Along with the feeling of reward is often an association with what we might call an "it's all about me" feeling. The research to date has focused on increased dopamine release when we talk about ourselves. But the reverse may also be true: that dopamine release makes us focus more on ourselves, or at least on getting the next dopamine release through actions that are fundamentally self-centered rather than altruistic or aimed at some greater common good.

So here are some possible implications of what we know about dopamine for worship.

We'll talk about one of those other neurotransmitters, the hormone oxytocin, in the next post.