An Energy Map for Worship 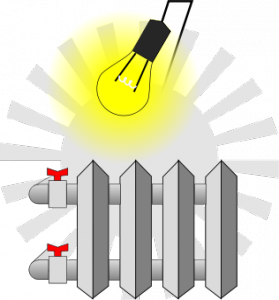 As a companion piece to the Bearings in Worship Series I thought it might be useful to "break out" a briefer post focusing simply on the kinds of energy before, during and between the four basic movements of worship.

Before Worship: Energy Scattered Everywhere
People enter they typical worship space with all kinds of thoughts, ideas, feelings and experiences, probably very few of which have much if anything to do with being part of the people of God who will offer themselves to God together in the service to follow.

That's why, in order to start worship together well, much less to offer ourselves as individuals to God, we need something that fairly quickly calls us to attention and starts our bodies, minds and spirits moving together in a Godward direction.

Entrance: Synchronizing Bodies, Minds and Spirits in Attention and Praise to God
There are at least two major ways to get a group into focus and sync. Both involve an intensive and intentional use of our bodies.

One is through music, singing, and dance. Music literally tunes our minds, and dance, whether it be a processional with choir and clergy, the clapping and swaying of the congregation, or rocking out with a praise band, tunes our bodies to the beat of God's praise.

Another, more common in contemplative settings, is directed silence. Effective directed silence helps each person present tune attentiveness to breathing and heartbeat, and these in turn may begin to synchronize with others in the worship space. Distracting thoughts are dismissed. Focus is achieved.

By either path, the energy is active and bodily. By either path, we are moved from scattered thoughts and feelings toward being one in body, mind and spirit in the active praise of God.

Word and Response: Sustained, Attentive Listening
From synchronizing, active, kinetic praise in the entrance, we move toward a period of sustained, attentive listening to scripture and its proclamation, followed by responses of commitment, faith, and prayer appropriate for the day and as the Spirit prompts and leads. The last acts of the Entrance, whether a prayer for illumination or some other action, should land us poised for listening to the scripture read. The key descriptor for the energy of this whole movement is "sustained." To sustain the energy to remain attentive, we need to do more than simply sit still. This is why responses to scripture, such as a Psalm or a hymn, are interspersed throughout the readings. This is also why the sermon must not merely explain the scriptures, but move us, typically more than once and in more than one way, toward experiencing the Spirit of God speaking to us through them.

Thanksgiving and Communion: Active, Full-Bodied Praise
Managing the transition from sustained listening toward active, full-bodied praise in the celebration of Holy Communion is not easy, nor even necessarily often well done, as I noted in "Bearings between Word/Reponse and Table." As I also note there, the "Invitation" as we have it in our official ritual (UMH p. 7) can be a very effective means to do so. It provides a map of the actions to follow (confession of sin, pardon and peace), and between the peace and the offertory that follows before the Great Thanksgiving, we will have shifted the energy from sitting and listening toward standing and responding to God and with each other as we do in the Great Thanksgiving itself. This whole series of actions from Invitation to the beginning of the Great Thanksgiving, then, is about "retuning" our bodies, minds and spirit's to "sing God's praise," so that when we get to the words, "And so, in remembrance of these your mighty acts in Jesus Christ, we offer ourselves in praise and thanksgiving as a holy and living sacrifice" (UMH 10), we are actually primed and ready to do just that.

The nature of the energy that follows the breaking of the bread, then, is intended to be of one kind with the energy of joyful self-offering that preceded it. This is why it is important that we move from breaking to serving as quickly as possible, with joyful singing and few if any explanatory words, and that lines to receive not be long so as to interrupt the mood of joyous expectation. This is also why the options for what people may do after receiving should help them sustain a feeling of gratitude, culminating in the unison prayer of Thanksgiving after all have received and the Lord's table is back in order.

Sending: Propelled into the World in the Strength of the Spirit
The Sending builds directly on this energy of renewed commitment joyous gratitude from the conclusion of Holy Communion, and steps it up considerably. If the energy of the Entrance was about calling us to attention, the energy of the Sending is about driving us into the all those places in the days or week ahead where we will, individually and collectively, have the opportunity to "be for the world the body of Christ redeemed by his blood" (UMH 10). If anything, this means the energy and strength of the music, singing, and dancing (in whatever form) should be even higher at our "procession into the world" than at our procession into the worship space. The final words and acts of blessing then are never a denouement. They are instead much more like a coach driving the team onto the field. "Go, team, go!"

Make the Map Yours
The next time you are involved in planning worship, consider starting with this outline of worship's "energy map" for an entire series or season. Your energy map may vary a bit from week to week in intensity relative to what is described here. But try not to let it vary much in kind. Then see how planning worship with this kind of energy map in mind helps you and your planning team improve the flow, the feeling and even the creativity of worship as the series or season progresses.