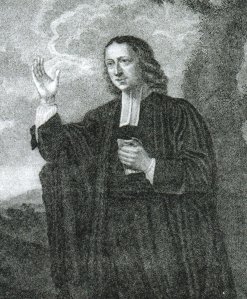 On May 24 each year Christians who practice the Wesleyan/Methodist tradition recall the day that marked a turning point in John Wesley's life and ministry. A few months after returning to London after a disappointing mission experience in Georgia, Wesley was discouraged and questioning his own faith.

On May 24, 1738 some of Wesley's friends compelled him to accompany them to a Moravian society meeting in a room on Aldersgate Street, a few blocks away from St. Paul's Cathedral. We all know what happened that night from the famous quote from Wesley's journal:

In the evening I went very unwillingly to a society in Aldersgate Street, where one was reading Luther's preface to the Epistle to the Romans. About a quarter before nine, while the leader was describing the change which God works in the heart through faith in Christ, I felt my heart strangely warmed. I felt I did trust in Christ alone for salvation; and an assurance was given me that He had taken away my sins, even mine, and saved me from the law of sin and death.

Wesley's experience that night was a conversion. He experienced a "conversion" in thinking and understanding about the nature of grace and salvation. That night Wesley realized that forgiveness of sins and acceptance by God (justification) is a free gift. Nothing we can do will every make us worthy or acceptable. God did the work of atonement on the cross in the death and resurrection of Jesus Christ. On May 24, 1738 Wesley's was awakened to the truth Paul writes in Ephesians 2:8

For by grace you have been saved through faith, and this is not your own doing; it is the gift of God.

Another way of describing Wesley's experience is to say that at Aldersgate Street he got the order of salvation right.

Prior to May 24 Wesley believed, along with many other Christians, that a person must be made righteous before God would accept him or her; that one must be sanctified before one could be justified. At Aldersgate he realized that justification is a free gift and marks the beginning of the process of sanctification.

Wesley's experience marks the beginning of the Methodist experience of the evangelical revival that was spreading across Britain at the time. An excellent example of Wesley working out his experience at Aldersgate Street is the sermon he preached at the St. Mary's Church in Oxford on June 18, 1738: Salvation by Faith

Reading and reflecting upon that sermon is a great way to mark this important day in the Methodist tradition.

Finally, we must also remember that Wesley's Aldersgate experience was facilitated by his brother, Charles, who had his own very similar experience on May 21. Knowing about Charles' joy certainly contributed to opening John's heart to the Holy Spirit's leading. John also received much help and support from his friends. They were Anglican and Moravian preachers, priests, and lay people who met with him to read Scripture, converse, pray, eat and drink in Christian fellowship. They walk with him through one of the lowest periods of his adult life. Wesley's friends compelled him to accompany them to the Aldersgate Street society meeting. This tells us that faith is deeply personal, but it is not private. As Christians we are responsible for our sisters and brothers in Christ.

Charles wrote a hymn to mark the one year anniversary of his "conversion." You will find the text of that hymn at #58 of The United Methodist Hymnal. Here are just a few of the stanzas:

Glory to God, and praise and love
Be ever, ever given,
By saints below and saints above,
The church in earth and heaven.

On this glad day the glorious Sun
Of Righteousness arose;
On my benighted soul he shone
And filled it with repose.

Sudden expired the legal strife,
'Twas then I ceased to grieve;
My second, real, living life
I then began to live.

Then with my heart I first believed,
Believed with faith divine,
Power with the Holy Ghost received
To call the Savior mine.

O for a thousand tongues to sing
My great Redeemer's praise!
The glories of my God and King,
The triumphs of his grace.