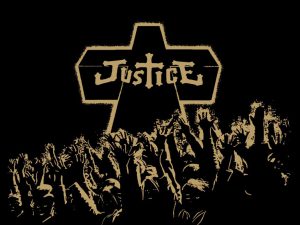 Justice is a word we hear often. It is used a lot with regard to crime and punishment. Justice, in this context, often means punishment and revenge; punishment for crimes committed; vengeance for the victims who have suffered loss and injury. While this popular understanding of justice has its place, it is not the justice we find in the Bible.

God's idea of justice is different from our human ideas. God is the ultimate judge of the universe. Nothing escapes God's judgment. God is not impartial. God is the judge who takes sides. For God, justice is experienced in the relationship of covenant love. God seeks justice for those who live in covenant with him. God comes to us in the man, the Jew from Nazareth, Jesus Christ. In him, God has shown the world what justice looks like. In Let Justice Roll Down Bruce Birch writes, "Justice is the chief attribute of God's activity in the world." This is illustrated by the beatitudes found in Luke and in Matthew. In the beatitudes we can see that God's justice is biased in favor of those who are the poor, the oppressed, the weak, the vulnerable. God's justice acts in their favor and against institutions and systems responsible for their suffering.

God's justice is about establishing and maintaining community. God's greatest concern is for the protection of the community as a whole through insuring the basic rights of the poor, the weak and powerless. This concern for the most vulnerable of the world is the main purpose of the law and of God's mission for the world in Jesus Christ. In this definition of justice God promises to save the poor and bring down the powerful and wealthy who exploit and oppress them. God takes the side of the poor because no one else will. Therefore, to be in relationship with God, to be on God's side, is to be on the side of the poor.

John Wesley knew this very well. He understood God's preference for the poor. His understanding of God's justice is revealed in his work on behalf of the poor. Wesley spoke out against merchants who charged unfair prices for their goods, distillers whose products destroyed the body, physicians who deliberately prolonged their patient's illnesses in order to continue collecting fees, and lawyers who abused their profession. Wesley protested the oppression of war and slavery. He understood that the people who fought the wars and suffered in slavery were the poor and vulnerable people of the world.

Wesley worked to provide free health care, education, and job training to the poor. He created a credit union from which poor people could borrow money to gain freedom from debtors prison and helped people find employment. Wesley knew that the gospel of Christ could not be heard over the growl of an empty stomach or the cries of hungry children. His was a witness to Jesus Christ and his justice in and for the world.

John Wesley is a good teacher for us when we ask about acts of justice today. Many of the conditions he faced are in your community today. We can find ways to help the poor lift themselves out of poverty and hopelessness: support a local food bank and literacy and job training programs with your money and your time; supporting the work of community organizations with crime victims, conflict resolution, and domestic violence with your gifts and time; and participating in local, state, and national government by voting, attending public meetings and speaking out or writing about issues of justice.

Another act of justice is to examine your own attitudes toward the poor, the prisoner, the victim. Are they welcomed by you? Is your congregation a place where they could experience God's love?