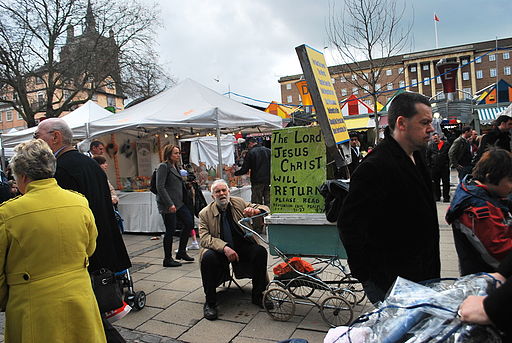 We all know there is much competition for attention between Advent and Christmas Season (Advent 1 through Epiphany, January 6) and the wider culture's "Christmastime" (November through December 25).

The result of this competition? "Christmastime" generally wins. Advent and its focus on the second coming of Christ and the fulfillment of all things begun in his first coming is lost.

That's a major loss. Advent is the one time of the church year specifically dedicated to this focus. While we rehearse and remember the second coming, new creation, and the fulfillment of all things every time we pray the Great Thanksgiving and celebrate Holy Communion, Advent was developed from the beginning to be the season where we focus our worship and teaching around this explicitly. The church year starts with Advent precisely so we can "begin with the end in mind."

I've used the picture above in this kind of article for several years now because it still speaks so eloquently. Look at it closely. The setting is the marketplace. No one is paying attention to this man's sign except the photographer. Everyone else is walking by, as if the sign means nothing. It makes no difference to what anyone else is doing. They're there to shop! They aren't there to think about the end, or proper ends, of this world.

But "Christmastime" causes us to lose more than just Advent. In effect, we often lose Christmas Season, too. These twelve days (December 25-January 6) were designed as a time of celebration and intensive contemplation of all that the Incarnation of God in Jesus Christ began to set loose in the world.

“Christmastime” does not do this. Instead, beginning as soon as possible after Halloween, and at the latest after Thanksgiving, it creates and unleashes peer pressure to buy all kinds of gifts, provides multiple opportunities for “feel-good” parties and end-of-year giving to various charities, and culminates on December 24 or 25 with the babe in the manger and the comforting illusion that all is now well with the world. “Christmastime” then continues not with any meditation on the implications of the incarnation, but with a sort of national “time out” to return unwanted gifts, see family, and handle all end-of-year business before January 1 rolls around.

The contrast could not be starker. The mission of Christmastime is to silence the cries of the baby Jesus, because his cries would break the illusion that all is well if we have played our role as "seasonal consumers" aright. But the readings of Christmas Season do not let us do that. We hear poignantly of the martyrdom of Stephen on December 26 and the wailing of Rachel renewed in the "slaughter of the innocents" on December 28. The stories of terrified, then joyous shepherds in Luke, of wandering Iraqi astrologers in Matthew, and of the Word becoming flesh and dwelling among us in John provide at best a "strange comfort."

Christmastime offers a nostalgia- and consumerism-driven Lethean escape from this world. It is a cultural opiate for the masses. Christmas Season drives us directly into this world's deepest sufferings with both its deepest pain and its highest hopes.

For the church to keep Advent and Christmas Season need not call us to stand back from or in harsh judgment on what the surrounding culture has created (with our cooperation!) in Christmastime. Feelings of peace and comfort, the joy of giving and receiving, warmth in the midst of winter-- these are all fine things. We can still enjoy them with family, friends, and siblings in Christ.

But actually keeping these seasons in worship and in the life of the congregation calls and equips us for something far more, and far richer, than what “Christmastime” offers. A full celebration of Advent, four to seven weeks, followed by a full celebration of Christmas Season enables us to see what the wider culture often keeps invisible, to feel with a depth Christmastime may anesthetize, and to love with the fierce determination of “God with us, every one.”

In our article, A Modest Proposal for Advent/Christmas Peace, Safiyah Fosua, Dean McIntyre, and I suggested starting the singing of Advent music two weeks early, and Christmas music beginning with what is now the third Sunday in Advent. This would give four full weeks of Advent focus, at least musically, plus up to three full weeks for Christmas (counting Epiphany Sunday, which is the earliest it can be this year, on January 1), giving each some significant time and focus. This wouldn't require changing lectionary readings at all.

A similar approach is offered by The Advent Project. Developed by the Rev. Dr. Bill Petersen, Episcopal priest and liturgical scholar, together with a seminar of other scholars and practitioners in the North American Academy of Liturgy, including United Methodists, The Advent Project suggests changing the liturgical calendar, but not the lectionary at all. Petersen and company note that Advent used to be a season of seven Sundays until Pope Gregory VI shortened it to four in the eleventh century.

While Pope Gregory VI shortened the celebration, he actually didn't change the lectionaries. This meant that the readings appropriate for a seven-week celebration of Advent were still being read for seven weeks, starting with the first Sunday after All Saints Day (November 1). The current lectionaries Western Christians now use, both Roman Catholic and Revised Common Lectionaries, have preserved that pattern as well. So the Advent Project's proposal, already tried in a number of Episcopal, Lutheran and United Methodist congregations, aligns our celebration of Advent with the lectionaries we already have. Nothing else changes. Just the starting date for Advent, and, perhaps, as the project notes, the number of candles that might be included in an Advent wreath (seven plus a central candle, rather than four). For United Methodists, unaccustomed to celebrating All Saints Day on November 1, but on the nearest Sunday following, Extended Advent would likely last six Sundays in 2016.

The Advent Project website has not only rationale, but also a rich set of resources, including suggested prayers and "O Antiphons" (related to verses for "O Come, O Come Emmanuel") for each Sunday to help congregations who want to try it get started with solid support.

The Advent Project proposal also seems also be to gaining some wider ecumenical traction. This year, United Methodist, Episcopal, United Church of Canada, Presbyterian Church USA, Anglican Church of Canada, and several other denominations will continue to raise awareness of this possibility through their websites. The Consultation on Common Texts (developers of the Revised Common Lectionary) hosted an ecumenical forum on the topic at our meeting in New York in March 2012.

For more information on specific ways to implement Extended Advent, based on the readings for 2015, see our webinar, “Celebrating Extended Advent: Why and How-to,” recorded September 15, 2015. A 2016 version will be offered later this year.

Many of us recognize that while these proposals would restore a longer time of Advent celebration, it may not yet directly address what for nearly all of us remains a serious truncation of Christmas Season. Our congregations seem to spend all their energy on Christmas Eve, few keep Christmas Day itself, and as for the rest-- it's one or two "low Sundays" at best until folks get back from various "Christmas vacation" schedules. While the church year calls for high celebration and deep contemplation together, we are most often more scattered and less focused on worship in the two weeks following Christmas Eve than at any other time of the year.

That is why I have offered a third, much more radical approach. It rearranges the lectionary and, more dramatically, the calendar to produce a four-week Advent and, in this case, a three-week Christmas Season.

Here's how it works. Start Advent two weeks early, and celebrate it for four weeks, ending with Advent 2 on the current calendar. There are no changes in the lectionary so far. You just back up and use the previous two weeks as Advent readings.

Then, on what would have been the Third Sunday of Advent, start celebrating Christmas Season by using the readings for the Day of Epiphany. For what had been Advent 4, use the readings for the Sunday after Christmas. For Christmas Day and Eve, flip the established readings-- so the Incarnation is front and center on what is likely to be the most widely attended service. Then, for January 1 (formerly Epiphany), use the reading for readings for Advent 4 as further reflection on the implications of the Incarnation and as lead-ins to Baptism of the Lord Sunday (first Sunday after January 6).

Here's a proposed set of readings for Advent and Christmas Season 2016/2017 based on this plan:

This way, even if the people in your congregation are scattered after Christmas Eve, you will still have given two full Sundays while more people are around to the established Christmas Season Sunday readings, not to mention Christmas Eve and Christmas Day itself, and you will have different readings to explore in a new way for the Sunday after Christmas.

This proposal is also problematic. It seriously messes with the calendar and the order of the lectionary we have and share with many other Christians worldwide. It widely separates Epiphany from Baptism of the Lord, while the two had originated as celebrations kept on the same day. It may represent too much of a concession to the pressures of U.S. culture. And because it is such a radical change, it may also be very unwelcome, despite the fact it may address our theological, liturgical, and cultural needs for giving serious attention to both seasons.

How Will You Respond?

The time has come, clearly come, to celebrate both Advent and Christmas as fully as possible in the lives and worship of the Christians called United Methodists. So let me suggest you prayerfully consider how you will do something to ensure your congregations have a richer celebration this year than last of Advent and Christmas.

Pick one of these proposals, and give it a serious try. Or try something else, such as a full regular celebration of Advent and Christmas Season using the calendar and readings we already have, celebrating Advent for a full four weeks beginning November 27, 2016, and then a full Christmas Season (through Epiphany, January 6, rather than stopping on January 1) beginning December 24 after sunset-- finding some way to keep the energy of Christmas going well after Christmas Eve and its focus well beyond the babe in the manger.

We have a powerful message to proclaim, celebrate, and contemplate as fully as we can at this time of the year. Resolve to do what it takes to make that happen where you are.

And know you have the full support of the worship office at Discipleship Ministries and our counterparts in many other denominations as you do!

Whether your church entered the world of online worship in response to shelter-in-place orders during the COVID-19 pandemic or years beforehand, . . .

As with New Years Day, Mother's Day, Independence Day, Labor Day, Thanksgiving Day, and others, Veterans' Day is not a part of the liturgical cal. . .

This resource is the full music and worship planning calendar for each Sunday in 2023, as well as special days and times throughout the year.. . .