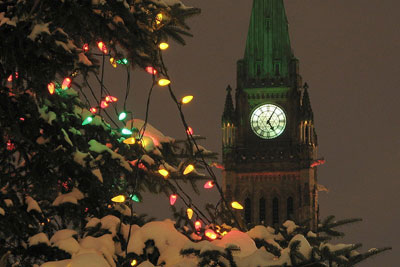 Photo: The Peace Tower at Christmas.
Ottawa, Canada.
Used by permission under a Creative Commons License.

We've all seen and lived the pattern. Christmas Eve services are a huge celebration, bringing in folks we may rarely see at any other time of the year. On Christmas Day, we may be lucky to fill the choir area. The Sunday after Christmas is also typically a low Sunday because many regulars may be visiting elsewhere if they attend worship at all. The Sunday after that is the celebration of Epiphany, which marks the end of Christmastide and is also typically a "low Sunday," one last chance for a weekend off before school and work routines resume.

Thus, while the church calendar has offered a full twelve days to celebrate and ponder the mystery of the Incarnation, the real church calendar (what we actually do with this time in our congregations) may offer perhaps just a single night with any intentionality or intensity.

Clearly, the official church calendar and the real church calendar are out of sync with each other. With perhaps few exceptions, I see no easy way for individual congregations to get them back in sync, at least not in North American culture.

Something's got to give. Either individual congregations need to become far more insistent on giving these days at this time of the year more serious attention and find ways to get their members to do likewise, or the culture has got to give the church these days back again.

The culture has no reason to budge. I think we know that. It is thoroughly invested in investing us in end-of-the-year retail and travel activities. It has no incentive to back off, and it has every financial incentive to push its agendas even harder.

And I think we know most of our congregations aren't going to change, either. We lack the influence, even with our most committed members, to convert their probably already scheduled social, family, and travel plans toward the celebration and contemplation of the mystery of the Incarnation during these days. Push too hard in this direction, and you might expect attendance during Christmastide to go even lower.

So if we can't change the culture, and we're unlikely to change the schedules and "winter break" patterns of our own members, how will we be able to carve out some time actually to celebrate and contemplate the mystery of the Incarnation? How do we find the time and give the observance of Christmastide the level of attention and meaning it deserves?

One answer is related to the one perhaps most commonly practiced by North American Protestants generally: carve the two weeks leading up to Christmas out of Advent and use those days to celebrate Christmas. It's not at all uncommon for congregations to start singing Christmas hymns by mid-December at the latest. It's also fairly common for congregations to schedule a variety of Christmas-related special events during those weeks. These may include services of Lessons and Carols, cantatas, Christmas parties, or caroling at nursing homes or other locations, all prior to Christmas itself. The culture at large in North America seems to endorse such "early celebration" as well. After all, Christmas themed commercials, displays, and "store-wide specials" start appearing nearly everywhere here just after Halloween!

There are two significant problems with that approach, though neither is necessarily fatal. One is that it's so easy to correlate our Christmas celebrations with the height of shopping and pre-Christmas party frenzy that we may in fact be more occupied by shopping and pre-Christmas parties than celebrating and pondering the mystery of the Incarnation. We could try to be more intentional about this in preaching, teaching, and supportive tweets, texts, or Facebook posts to one another, but we have to admit that the culture's competition for our attention is at its fiercest in those two weeks.

But perhaps part of what makes that competition as fierce as it feels is that we know it's not yet Christmas, so we don't really need to focus on the Incarnation until it actually is Christmas.

What if we actually begin Christmastide, full blast, two weeks earlier? And what if we start it, not with the Luke story, but Matthew's story of the magi we typically read at Epiphany. Use the readings for the first Sunday after Christmas the following Sunday (The Magi story, Part 2, in Year A). On Christmas Eve, which may have the highest attendance, use the readings for the third service of Christmas Day (John 1). And for Christmas morning, use the story of the shepherds in Luke 2.

If we move Christmastide back to mid-December, we also need to move Advent back to mid-November, lest we lose our equal need to focus on the culmination of all things in the second coming of Christ. In our article, "A Modest Proposal for Advent/Christmas Peace," Dean McIntyre, Safiyah Fosua, and I noted the texts at the end of the "official church calendar" actually pick up the very same kinds of themes as the Advent texts do.

Changing when you begin Advent and Christmastide locally doesn't change when Advent is, officially, for The United Methodist Church or anyone else. For The United Methodist Church, only General Conference can alter our liturgical calendar, and there were no proposals for such a change in 2012. Frankly, I would find it hard to imagine us approving any such official changes in 2016, even if they were proposed.

At one level, this sounds like a win-win-win. Advent gets four full Sundays, and its readings actually six. Christmas season, starting with a re-located Epiphany (first Sunday of Christmastide), gets four Sundays plus Christmas Eve and Day, also for a total of six. At least three of these might be reasonably well attended. Incarnation, rather than simply the manger, may get center stage on Christmas Eve. Baptism of the Lord gets more prominence and some actual lead-in. Everyone is happy, right?

This kind of rearranging of calendars and texts represents a significant break from the long-established Christian calendar and probably the expectations of most of our congregations. If you think you want to pursue this, start signaling this significant lane change and "reconstruction zone" now! See what kind of feedback and pushback you get. By all means, proceed with boldness, but also with appropriately humble caution. Approach it as something to try and evaluate after you've done it, not as "the way things shall be done hereafter!"

Further, our congregations messing with the calendar in this way could be distressing to some of our ecumenical partners. So while this may be a win-win-win for some local United Methodist congregations (and I think it could be!), from the standpoint of Christian unity, it could be a big loss. It might be received as one more sign that United Methodists are more interested in doing our own thing to suit ourselves than submitting ourselves to being part of the whole body of Christ. Maybe that kind of assessment would not happen where you are. Just be aware that it could.

ReThink Church to Re-Joice in the Christmas Season

All that has been shared above presumes that congregations either do or should celebrate Christmas Season more or less on their own. If the major reason that we don't celebrate Christmas Season more intentionally or with more energy is that a good number of people in our individual congregations aren't around to do so, perhaps we should also consider looking outside the individual congregational box a bit.

Not everyone leaves, after all. There are some people who do attend services we offer as individual congregations. And in some places, there may in fact be a good number of visitors to your community during these weeks.

So what if, instead of having diminished celebrations during these weeks because we focus on the gaps created by those absent -- what if we focused on gathering all of the Christians who will be present or visiting during those weeks?

What if Christmas Season were not expected to be celebrated by each congregation on its own?

What if, instead, Christmas Season were planned and celebrated by clusters of congregations, perhaps even ecumenically, in local communities!

Imagine joint choirs, liturgical resources shared from the riches of various traditions, preaching from the best who are present in the community, and festive meals shared from the finest recipes of each congregation that participates.

Imagine the abundance and the joy! And imagine, too, the folks from other places who may come to visit where you are, and their joy in finding that Christmas joy really does continue with gusto in the worship and the life of your communities, whatever the "secular" calendar says.

When I imagine that, I begin to imagine something else as well. A clustering of United Methodist and other congregations like this sounds like a remarkable example of the body of Christ happening here and now. This kind of gathering, perhaps far more than our individual congregations, might be able to help all those who can participate both celebrate and ponder the mystery of God become flesh and body in our midst in Jesus.

So perhaps, just perhaps, it is time to Rethink how church -- every form of Christian community where you are -- might celebrate Christmas Season … together!

Watch Night is another night to gather together to worship and to hope. Watch Night is not simply the culmination of the Advent and Christmas ser. . .

While lighting the candles of the Advent wreath, pause to reflect on where you see hope, peace, joy, and love.. . .