Discipleship Ministries | History of Hymns: “We Believe in One True…

History of Hymns: “We Believe in One True God”

We Believe in One True God
by Tobias Clausnitzer, trans. Catherine Winkworth
The United Methodist Hymnal, No. 85

We believe in one true God,
Father, Son, and Holy Ghost,
Ever-present help in need,
Praised by all the heavenly host;
By whose mighty power alone
All is made and wrought and done.

“We believe….” Every time we sing a hymn such as “Holy, Holy, Holy! Lord God Almighty,” “I’m Gonna Live So God Can Use Me,” “Standing on the Promises,” “Siyahamba,” or “In Christ Alone,” we are singing, “We believe.” Although the texts of most Christian congregational songs do not include the phrase and only imply “we believe” or “I believe,” only a few hymns explicitly state this affirmation of faith.

“We Believe in One True God” is one of these. The hymn is one of many German hymns translated to English by the famous translator Catherine Winkworth (1827–1878). Several of these hymns, such as “Now Thank We All Our God” (The United Methodist Hymnal, 102), “Praise to the Lord, the Almighty” (The UM Hymnal, 139) and “If Thou But Suffer God to Guide Thee” (The UM Hymnal, 142) are found in most of the traditional hymnals of various Christian denominations.

Catherine Winkworth is recognized as the preeminent contributor of German hymns translated into English. Despite her own lack of formal higher education typical for English women of the time, she learned the German language and became an advocate for social issues and women’s education. Encouraged to translate hymns from a large collection compiled by a German diplomat, she published two collections of her hymn translations, which do not include “We Believe in One True God.” But in 1863, the distinguished musicians William Sterndale Bennett (1816-1875) and Otto Goldschmidt (1829-1907) produced The Chorale Book for England using Winkworth’s translations, and this time the hymn was included (see Illustrations 1 and 2).

The original hymn text “Wir glauben all’ an einen Gott,” from which Winkworth translated her “We All Believe in One True God,” was written by Tobias Clausnitzer (1619–1684), a German pastor and poet born a century after Luther’s 95 theses were posted in Wittenberg in 1517. It is a poetically interpreted paraphrase of a significantly abridged Apostles’ Creed, with one stanza each for Father, Son, and Holy Ghost and a doxology to all three Persons in its final couplet. It should not be confused with Martin Luther’s paraphrase of the Nicene Creed, which has an identical opening line and which is also included in several Lutheran hymnals. But it was the Apostles’ Creed that Luther included in his Small Catechism (1529), written in the vernacular, so that parents could teach their children the creed and what it meant for them. Luther’s intent in his simple explanations was for all members of a congregation to be able to say the creed in their own language and understand their relationships as individuals with each person of the Trinity, as well as God’s relationship with the whole church. 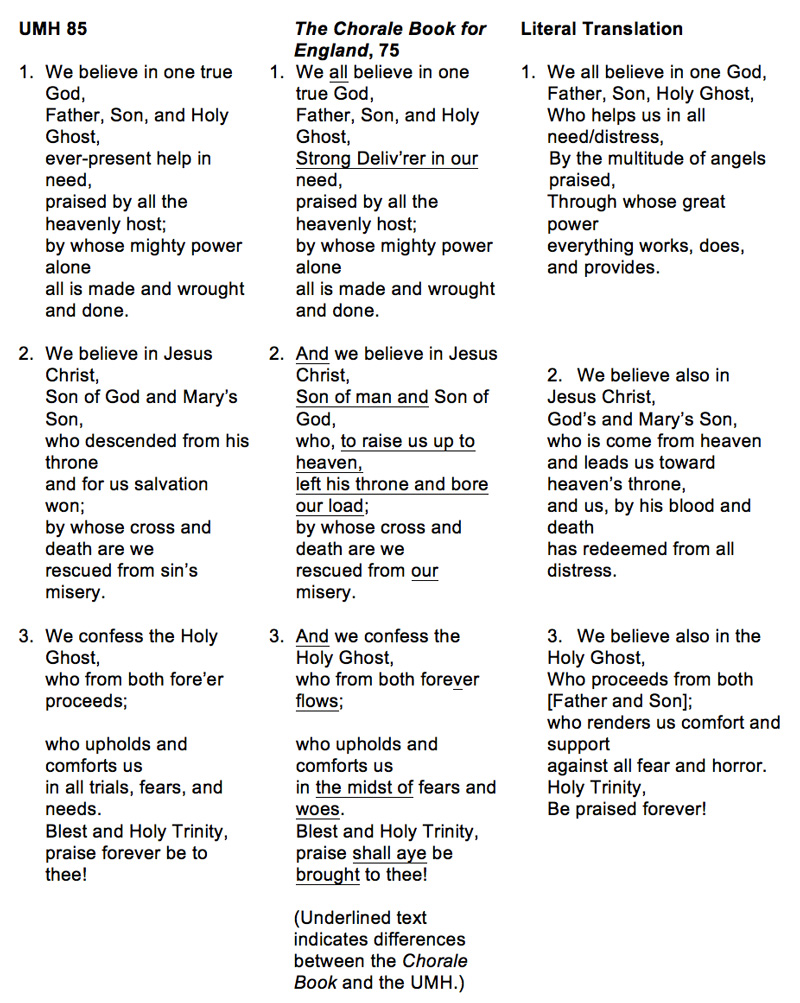 Clausnitzer’s abridgement of the creed removes any mention of Christ’s resurrection or return, the church, the saints, or the resurrection of the dead, and only hints at the concept of life eternal. But in spite of its abridged nature, one hard-fought essential from the Nicene Creed is added, both in Clausnitzer’s text and in all English translations—Filioque (an affirmation that the Holy spirit proceeds from the Son as well as the Father, found in the hymn’s stanza three, line two). The hymnal Rejoice in the Lord (1985) uses the same text as The United Methodist Hymnal, but adds three stanzas by Reformed Church in America seminary president Howard G. Hageman (1921-1992) to make the text a more complete interpretation of the Apostles’ Creed, including all of these missing components.

Regardless of the version selected, whether Clausnitzer’s German or any of the English translations, each stanza begins with the plural “we believe,” instead of the correct translation from the Latin credo, “I believe.” Clausnitzer, as well as Luther before him in his versification of the Nicene Creed, may have chosen “we” to emphasize the communal nature of saying or singing the creed as a congregation.

In the last line of stanza two, the literal German may be translated as Jesus saving us from all distress; Winkworth changed to our misery, while the versions in modern hymnals use sin’s misery. The more recent modification, qualifying the misery as that associated with sin, adopts the more realistic view that indeed, much misery in the world and much of our distress is not allayed by Christ’s sacrifice. This editorial change yields less disconnect between faith declared and reality lived.

Hymnary.org lists forty-eight hymnals, most commonly Lutheran, Methodist, or Presbyterian, which include this hymn.

“We [All] Believe in One True God” has been set primarily to two tunes, RATISBON, simplified in the nineteenth century from a fifteenth-century German folk tune, and WIR GLAUBEN ALL’ AN EINEN GOTT, from a late seventeen-century German Lutheran hymnal. Both tunes provide rhythmically unadventurous, syllabic settings of the text, giving a sense of solidity, a firm foundation, supporting the creedal nature of the text.

WIR GLAUBEN ALL’ AN EINEN GOTT

History of Hymns: 'God the Spirit, Guide and Guardian'

“God the Spirit, Guide and Guardian,” written by Episcopal priest Carl P. Daw Jr. (b. 1944), was first published in The United Methodist Hymnal (. . .

For over three hundred years, Christians have sung and cherished “Fairest Lord Jesus.” How did this multigenerational hymn of devotion arrive in . . .

History of Hymns: 'He Touched Me'

When it comes to evangelical gospel song in the last half of the twentieth century, two of the primary forces that kept this genre alive in their. . .