Discipleship Ministries | History of Hymns: 'Blessed Jesus, at Thy…

History of Hymns: 'Blessed Jesus, at Thy Word'

The United Methodist Hymnal, No. 596

Blessed Jesus, at thy word
We are gathered all to hear thee;
Let our hearts and souls be stirred
Not seek and love and fear thee,
By thy teachings sweet and holy,
drawn from earth to love thee solely. 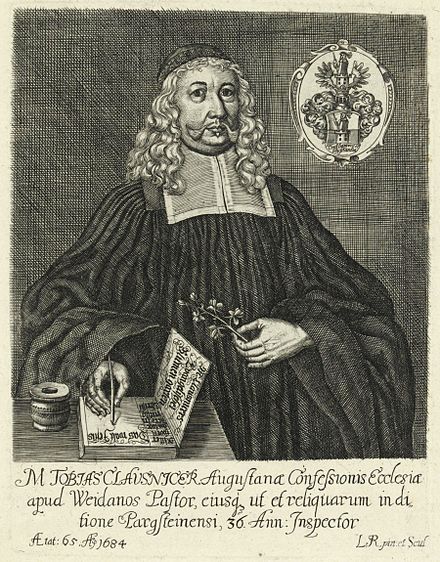 “Blessed Jesus, at Thy Word” was written by Tobias Clausnitzer (1619-1684) and appears for the first time in Frommer Christen Betendes Hertz und Singender Mund: Oder Altdorffisches Bet- and Gesang-Büchlein (Altdorff, 1663). Its publication was accompanied by a subtitle “Vor der Predig,” or “before the sermon,” possibly a recommendation coming from the writer himself (Frost, 354). Later, in the Evangelisches Gesangbuch, it appears under “Eingang und Ausgang,” suggesting its use at the beginning or ending of the service (Watson, 2018). The hymn may also be used “as a prayer for illumination, or at the opening of worship.” (Sanchez, 202).

Clausnitzer was a chaplain of the Swedish regiment in Leipzig (1644), and a preacher. He preached the thanksgiving sermon for General Carl Gutav Wrangel’s peace celebration on January 1, 1649, in Weiden, an event that marked the end of the Thirty Year’s War (Stulken, 323; Westermeyer, 351). Therefore, the rise of Pietist inclinations in hymnody during and after the Thirty Year’s War (1618-1648) is the historical context for which this hymn was written: a time in which the suffering of the peoples of Central Europe found expression in song; a time in which Clausnitzer and other hymn writers, such as Paul Gerhardt (1607-1676), sought to alleviate the confusion and lack of hope that surrounded the lives of those for whom they pastored. It is interesting to note that the famous hymn “Now Thank We All Our God” by Lutheran pastor Martin Rinckart (1586-1649) also was composed during the desolation of the Thirty Year’s War.

In the original, the hymn’s rhyme scheme is ABABCC; a pattern that appears frequently in German hymnody but which is challenging in English. The translation in The United Methodist Hymnal is by Catherine Winkworth (1827-1878) and appeared for the first time in her Lyra Germanica (2nd Series, 1858). Winkworth was a preeminent translator of German hymnody into English (Reynolds, Price and Music, 95). In fact, John Julian says that “Winkworth, although not the earliest of modern translators from the German into English, is certainly the foremost in rank and popularity. Her translations are the most widely used of any from that language, and have had more to do with the modern revival of the English use of German hymns than the versions of any other writer” (Julian, 1287). Winkworth sought to maintain the rhyme scheme, poetic meter, and meaning of the original German in her translations, succeeding admirably in this hymn,

Although Winkworth’s translation seems to be the most commonly used in modern English-language hymnals, there are alternative texts, such as the version by British priest George Ratcliffe Woodward (1848-1934) version from 1904:

Dearest Jesu, we are here,
At thy call, thy presence owning;
Pleading now in holy fear
That great sacrifice atoning;
Word incarnate, much in wonder
On this mystery deep we ponder

This version, originally included in Woodward’s Songs of Syon (1904), later appear in Hymns Ancient & Modern (1916, Second Supplement). It is not considered a translation per se but an adaptation; further confusion may arise from mixing Clausnitzer’s hymn (and its translations) with a hymn by Benjamin Schmolk (1672-1737) that begins with the same words as Clausnitzer’s hymn. Other versions (such as the Lutheran one) rely on other wording, such as “Dearest Jesus, at Your Word” (Westermeyer, 351).

The thematic material of “Blessed Jesus, at Thy Word” alludes to many New Testament references. “The initial image is drawn from Cornelius’ statement to Peter that his household has assembled in order to hear what God has given Peter to say to them (Acts 10:33). The second stanza adapts the imagery of the creation account in Genesis 1:1-3 as a description of the congregation awaiting enlightenment through Jesus’ word. The third stanza relies on Jesus’ own self-description as the Light of the World (John 8:12; 9:5) as well as the epithet ‘Light from Light’ in the Nicene Creed. Line 3.6 may be an allusion to Romans 8:26” (Daw, 402).

The tune almost exclusively associated with this hymn, known as LIEBSTER JESU (named after the first two words in German), was composed by Johann Rudolph Ahle (1625-1673). Ahle’s tune was first published in Neue geistliche auf die Sonntage (1664) as the setting an advent hymn by pastor Franz Joachim Burmeister’s (1633-1672) “Ja, er ist’s, das Heil der Welt.” (McKim, 493). It first appeared associated with this hymn in 1687, after having been altered from the original (McKim, 312).

Ahle was Kantor of St. Andreas’ Church and director of the Erfurt music school (1646-1654). Later, he also became organist at St. Blasius’ Church (1654), town councilor (1655) and mayor (1661) of the same city (McKim, 493). Ahle was an active music educator and tune writer that published treatises on singing and helped develop a new style of church music influenced by Italian opera. He, along with others working around the same time, called his church tunes “sacred arias” (McKim, 493). He wrote more than 400 florid, ornamented sacred arias intended for soloists, chorus, or solo singers and instruments, and not originally intended for congregational use (Westermeyer, 267).

The musical developments with which Ahle was involved were also closely connected to the political strife that these composers and writers lived through; a period in which, according to Routley (speaking specifically of Ahle’s work): “all this new energy is put through a narrower channel, the intensity increases, and we get such masterpieces as the two tunes of Ahle, LIEBSTER JESU and ES IST GENUG.… Taken very slowly as a solo, LIEBSTER JESU makes a profound impact.” (Routley, 62B)

LIEBSTER JESU was one of J.S. Bach’s (1685-1750) favorite chorale melodies, appearing in six different settings in his works (Daw, 402; Stulken, 272). The version we encounter in hymnals today is not the florid one originally crafter by Ahle and set by Bach, which was in a dotted and flourished rhythm, but an altered version (Frost, 354). While Ahle’s first version (associated with Burmeister’s hymn) is more soloistic, it shifted to a more congregational version associated with Clausnitzer’s text in Das grosse Cantional: Oder Kirchen-Gesangbuch (Darmstadt, 1687) (Westermeyer, 267).

Sanchez, Diana. The Hymns of the United Methodist Hymnal: Introduction to the Hymns, Canticles, and Acts of Worship. Abingdon Press, 1989.

Can you picture the excitement of this scene? Jesus enters Jerusalem on a donkey with crowds of people shouting “Hosanna.” Matthew also tells us . . .

History of Hymns: 'Child of Blessing, Child of Promise'

Written by Ronald S. Cole-Turner (b. 1948), “Child of blessing, Child of Promise” is a hymn often sung in preparation for or as a response to the. . .

History of Hymns: 'Hallelujah! What a Savior'

Christianity is, among many things, a faith of paradox—the paradox of the Incarnation that the God of the universe would take on human form in a . . .