Discipleship Ministries | History of Hymns: “At the Font We Start Our…

History of Hymns: “At the Font We Start Our Journey” 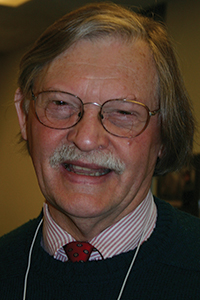 "At the Font We Start Our Journey,"
by Jeffery Rowthorn;
The Faith We Sing, No. 2114

At the font we start our journey,
In the Easter faith baptized;
Doubts and fears no longer blind us,
By the light of Christ surprised.
Alleluia! Alleluia!
Hope held out and realized.*

Brian Wren, in his book, Praying Twice: The Music and Words of Congregational Song, explains that theology can be done through the use of verbal arts. Wren explains that hymn texts do theology, "when anyone attempts, by artistic skill and creativity, the interplay of intellect and imagination, and/or the methods of reasoned enquiry, to grasp, know, and understand the meaning of God's creating, self-disclosing, and liberating activity centered and uniquely focused in Jesus Christ" (Wren, 2000, 364). In addition, the purpose of the hymn text is to express the theological and biblical viewpoint of the Christian faith and tradition. As a result, hymns must be viewed as a "particular genre of theological song" (Wren, 2000, 365).

The stanzas of “At the Font We Start Our Journey” are devoted to four symbols of Christian worship—font, pulpit, altar, and door. The text and symbolism remind the church that each Sunday's worship is a celebration of our Easter faith. The text, written by Jeffrey Rowthorn as a gift to the St. John's Episcopal Church in Waterbury, Connecticut, for the dedication of the church organ, is based on Acts 10:36-43, and Colossians 3:15. The Acts passage gives a vision of the Lordship of Christ and is the basis for the church striving toward inclusiveness. It depicts the impartiality of God—that God's gift and call in Jesus is to all. Timothy Sedgewick, vice-president and professor of Christian ethics at Virginia Theological Seminary, states the following: "The universalism of Christian faith is that all are called, without regard to language, culture or tribe; none are thereby excluded from the call to accept and follow Christ; we are called to the ministry of welcoming persons from the fringes around the acts of worship." (Bartlett and Taylor, 2010, 230). Colossians 3:15, in the words of Rollin A. Ramsaran, professor of New Testament at Emmanuel School of Religion, is the proper response for formation, cohesion for strong community, and the revelation of God's working through Christ for peace and rule is a gift of thankfulness. (Bartlett and Taylor, 2009, 163). Thankfulness is both the gift of God to the church in Christ, and the response the church brings to God.

Stanza one highlights the beginning of our journey of faith in recognizing our baptism (font), that our reservations of following Christ are replaced by Christ's invitation into relationship with him ("doubts and fears no longer blind us, by the light of Christ surprised"). The repeated "Alleluia" is found in each stanza and reaffirms the believer's acceptance of God's gift. Stanza two begins with "pulpit" to emphasize the importance of the spoken word through the Scriptures ("we are fashioned by the Easter tale retold into witnesses and prophets"). It is through Scripture that faith is proclaimed, and the church is constantly challenged to tell the story ("Faith proclaimed, yet still untold").

The altar is the focal point of worship in many church sanctuaries. It is where we reaffirm our faith, begin relationships through the act of marriage, bid farewell to loved ones, pray for strength, and gather to receive the bread and cup. It is in stanza three that we are reminded that the altar is the place where we are nourished and strengthened to proclaim the gospel to people beyond our walls of worship ("in our breaking it to pieces see the love of Christ outspread").

The final stanza reminds us of the statement found on the walls of many sanctuaries: "Enter to worship, depart to serve." God has commissioned the church to continue to bring the peace of Christ to a world broken and divided ("to restore a world divided to the peace of Christ as one").

Jeffrey Rowthorn (b. 1934), the author of the text of “At the Font We Start Our Journey," was born in Gwent, Wales, on April 9,1934. He received his education at Cambridge and Oxford Universities, Cuddesdon Theological College, and Union Theological Seminary in New York, where he later served as dean of instruction and chaplain. He was ordained an Episcopal priest in 1963. He joined the faculty of Yale University in 1973 as chapel minister of the Divinity School, and he became the founding faculty member of the Institute of Sacred Music. While at Yale, Rowthorn became the first holder of the Bishop Percy Goddard Chair in Pastoral Theology at Berkeley Divinity School, where he also received an honorary doctorate. (Young, 1993, 823). He was consecrated as bishop suffragan of Connecticut in 1987. Rowthorn has edited three hymnals—Laudamus: Services and Songs of Praise (1980), A New Hymnal for Colleges and Schools (The Yale Hymnal, 1989), and A New Hymnal for Colleges and Schools (The Yale Hymnal, 1992; with Russell Schulz-Widmar). He has had hymn texts published in numerous hymnals, including “Creating God, Your Fingers Trace” (The United Methodist Hymnal, 109), which was written in 1974 as a paraphrase of Psalm 148 (Music and Price, 134). His text, “Lord, You Give the Great Commission,” based on Matthew 28:19-20 with allusions to Luke 9:2 and 23:34 (Music and Price, 134), appears in The United Methodist Hymnal at 584.

John Goss (1800-1880), the composer of “LAUDA ANIMA,” with which “At the Font We Start Our Journey” is paired, was an organist at St. John's Cathedral and was a leading figure in the history and reform of English cathedral music and hymnody. From 1827 to 1874, he served as professor of harmony at the Royal Academy of Music in addition to publishing Parochial Psalmody (1826) and 257 Chants, Ancient and Modern (1841).

John Goss composed LAUDA ANIMA (Latin for "Praise, my soul") in 1869 for H.F. Lyte's hymn of the same title. The hymn tune became one of the most popular of the Victorian hymn tunes. Though the tune is perceived to be symmetrical, its phrases are not quite parallel. The first phrase contains five bars, while the remaining bars have four. The text appears in The New Century Hymnal (1995), using the tune WESTMINSTER ABBEY, and in Sing the Faith: New Hymns for Presbyterians (2003).

“At the Font We Start Our Journey” at https://hymnary.org/text/at_the_font_we_start_our_journey

Rev. Thomas L. (Tom) Baynham, Jr., is the Interim Director of Music at Friedens United Church of Christ (UCC) in St. Charles, Missouri. He has served in church music for congregations in Virginia, Indiana, and New Hampshire. A native of Richmond, Virginia, Tom holds degrees from the Boston University School of Theology (2015, Master of Sacred Theology), and the Baptist Theological Seminary at Richmond (2014, Master of Divinity). Tom is an active member of The Hymn Society of the United States and Canada, and he serves on the advisory team for The Center for Congregational Song.

“When Cain Killed Abel” connects the dots from their fraternal malfeasance to our own like transgressions against our families, our churches, and. . .

History of Hymns: 'Christ Beside Me'

The story of St. Patrick (c. 5th cent.), patron saint of Ireland, is filled with mystery and miracle – from his surviving a pirate kidnapping and. . .

History of Hymns: 'I am Weak but Thou Art Strong'

The precise origins of this traditional hymn are unknown, though it seems to have gained popularity both in print and in recordings during the 19. . .