Exploring Stewardship with the Saints: Francis of Assisi—The Way of Poverty 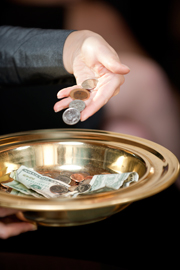 As Christians, we typically celebrate “saints” on their “saint’s day” or “feast day” – the day of their death. Francis’s feast day is celebrated on October 4. In recent decades, many United Methodist churches have celebrated a Blessing of the Animals on the first Sunday of October in honor of St. Francis’s legendary respect for animals. But Francis was not primarily a man who preached to birds! His chief characteristic was his complete trust in God, manifested in his embrace of “Lady Poverty.”

The story of the rich young man was one that Francis likely identified with strongly. After all, he himself had been a very wealthy young man, who had left his father’s house, left his group of friends, and renounced every material possession he had. This passage from Mark is paralleled in Matthew 19 and Luke 18. However, the version of the story recorded in Mark has some unique features that illuminate Francis’s story further. For instance, the beginning of Mark’s narrative reads, “… a man ran up and knelt before him.” (10:17b, NRSV) Francis was similarly impulsive and emotionally demonstrative – reacting to the prompting of the Spirit in immediate and dramatic ways.

Another line that is unique to Mark’s gospel is this one: “Jesus, looking at him, loved him, and said…” (10:21a, NRSV) What do you suppose this means? Of course, Jesus loves each one of us, completely! So what could Mark mean here? This little puzzle (what we are to understand from these 2 words – including why they are where they are in the story) is well worth meditating on as you work on your sermon on this text.

We all have friends or family members whom we love, and we like to think of our love as a constant feeling. However, are there times when what someone says causes you to pause, to look at him/her, and to especially love him/her right in that moment? Think of a particular thing a loved one did or said that caused your heart to swell, or that reminded you, “THIS is why I love him/her!” Now think over the transformation of Francis from playful rich young man to beggar for Christ. At what points in Francis’s story can you imagine inserting the words, “And Jesus, looking at him, loved him…?”

A third unique feature of Mark’s telling of this story is the detailed promise of what those who give up everything for Jesus’ sake will receive “a hundredfold now in this age - houses, brothers and sisters, mothers and children, and fields, with persecutions…” (10:30b) Francis’s life helps us make sense of this promise. He left his family, his house, his riches; and at the end of his life, he had hundreds of brothers and sisters in the orders he had founded. He was welcome in countless houses, not just throughout Italy but elsewhere (even by a Sultan at the time of the Crusades!), and he had a wide mission field that he saw as encompassing everything that God created. This did not come without hardship, but neither did Francis have to wait for “pie in the sky, by and by.” His Way of Poverty – surrendering his entire life over to God – had nearly immediate rewards in his daily life. Can you think of examples of this in your own life? Are there similar stories that you have been told by members of your congregation that you could tell in your sermon (with permission)? 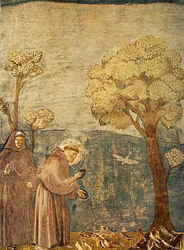 Francis began moving in the Way of Poverty when material possessions came to mean less to him than following God’s will. He sold a great deal of expensive cloth from his father’s store to help rebuild a local church. But his father viewed this as theft: the cloth didn’t properly belong to Francis. This was the door Francis had been moving toward without having realized it: he gave everything he had over to his father, and went into the woods to pray, wearing only his underwear.

This Way of Poverty is a very different way of looking at stewardship. Before exhorting others to give, Francis asks, “Is it yours to give? Or is it theft?” Let’s pause to consider – where does what you have come from? And is there a sense in which the one who provided your resources feels that they somehow own your conscience, or your behavior? Francis said that this kind of voluntary poverty was freedom – freedom from owing anyone other than God, and so freedom to serve God.

Are there possessions that shackle us?

Are there possessions that shackle us? That make us less free to follow God? How can we tell? And what might happen if we asked God to free us from this bondage?

Francis and his brothers did not accept money – they worked for enough food to eat for the day, or for their one outfit, or for water or a place to sleep. They did not own property, and so could not accumulate wealth. Of course, this way of life requires a society in which others have enough to share – which is to say, more than they need. This is a difficult question, and an important thing for individual Christians as well as for congregations to ask themselves: Do I have more than I need to take care of myself? And why? For Godly reasons, or for other reasons? How do I use my “extra” resources? Do I share them with others who do not have enough?

At its best, a stewardship sermon will inspire folks in your congregation to rethink their lives – to re-examine how they spend their time, and how they both earn and spend their money. Hopefully this will have a positive impact on the amount that your church raises for its programs, but that is not the primary goal. As a preacher, you are not called to be fundraiser in chief for a religious non-profit. Your primary call is to pastor /shepherd – to yourself be a steward of God’s people, caring for them and leading them in a way that prepares them for Christ’s return. At its best, preparing a stewardship sermon will inspire you to reexamine your church’s ministries, empowering you to speak prophetically to the community for which you are a spiritual leader – how much time is spent on worrying about tomorrow and how much is spent reaching out to those most in need in the community today?

Links:
Exploring Stewardship with the Saints: A Sermon Series (Introduction)
Sarah Crosby – The Way of Necessity
St. Luke the Evangelist – The Way of Generosity
Mary McLeod Bethune --The Way of Authority

The photo of St. Francis is Giotto - Legend of St Francis, Sermon to the Birds, Public Domain

Paul’s words could sound like an acceptance of existing power dynamics, a feather-and-ink signature under what is, rather than a contextualized c. . .

Pentecost comes on the heels of What Now – in the aftermath of the Christ having been taken from this earthly realm, first by human violence, and. . .