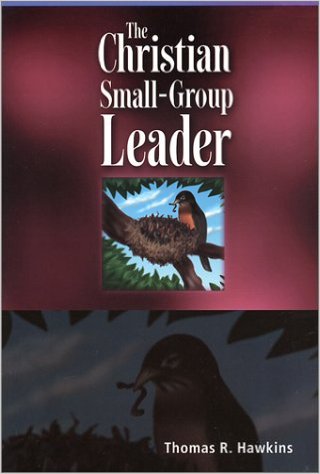 There are lots of small-group books on the market. They often spell out a particular system that has worked in a particular church (or church with satellite campuses) and give some biblical basis for the rationale (usually Acts 2). Thomas Hawkins’ contribution to this market, The Christian Small-Group Leader, is valuable for its theological grounding, insights into personal and group dynamics, and practicality.

“Either intentionally or unintentionally, leaders create environments where Christian faith is formed or deformed, where participants have an experience that enriches or improves their sense of community, where individuals are transformed into God’s holy people or sent away unchanged and unsatisfied” (11).

Some of the biggest fears people face when joining a small group concern the interpersonal dynamics that result any time people are together. An equipped small-group leader can diffuse those fears from the start through his or her hospitality and demeanor. Hawkins points out, “Small-group leaders whose lives give evidence of spiritual fruit are not anxious and emotionally reactive” (31).

Hawkins expands on the priestly function of a small-group leader to include the role of a “spiritual guide.” This, Hawkins observes, involves the “skills of the ear rather than the tongue” and knowing how to ask “inviting questions rather than doling out well-rehearsed answers” (14).

I appreciate Hawkins’ image of the table as the setting for small groups, but I am hesitant about his assertion that “every table is the Lord’s Table” (6). I would be more comfortable with a more nuanced take that every table has the potential for the presence of the Lord to be manifest, especially when a group is led by a mature Christian leader. Hawkins does acknowledge that while “tables are places of connection and hospitality, they are also places of resistance and struggle” (71). He makes hospitality practical and advises that small-group leaders “put a good interpretation on what members say” (47). This skill can work to diffuse aggressive speech and ensure that speakers feel heard. Hawkins adds a number of skills for facilitating when group dynamics are tense, such as mirroring, balancing, paraphrasing, and drawing out as well as techniques for sharing the responsibility for the group’s growth with other leaders and participants.

His framing of difficult interpersonal dynamics within a group as being acts of “resistance” is advantageous. He defines resistance as “the unconscious process of slowing or blocking a group from making progress on a topic or issue” (72). It doesn’t take long as a small-group leader (or participant) to encounter resistance within a small group. I’ve certainly been in some groups where “resistance” felt a whole lot more like attacks. Hawkins observes that resistance is inevitable, although it can also be beneficial. Most important, he counsels that “resistance is rarely aimed at a group’s leader.” This advice is especially important in an atmosphere where attacks are taken personally, even when they are not meant to be personal. Hawkins’ advice can empower small groups. Making resistance a communal reality can take pressure off the leader who might otherwise feel attacked and disempowered. Additionally, it takes the burden off the leader from feeling that he or she has to “fix” someone.

Hawkins specifies six ways to respond to resistance (if you want those, you’ll have to buy the book) to empower a group to address these interpersonal realities and to see the implications if the resistance continues.

The book does drift in a few places, such as when Hawkins covers the need for small-group leaders to collaborate, to have spiritual partners, and to advance a shared vision. Important as those are, they distract from what could be a very concise handbook for small-group leaders. Though he verges on over- theologizing on hospitality, he is correct that “Hospitality has become increasingly secularized” and that “many contemporary congregations have abandoned hospitality’s radical implications” (43). Instead of focusing on those areas, I wish he had expanded on the emotional dynamics of being a leader (differentiated leadership) and group stages.

While not a handbook for small-group leaders (though it could be used for that), The Christian Small-Group Leader provides the material needed for training small-group leaders. The book also serves as a warning for pastors and those in charge of small-group ministry that training for small-group leaders is necessary. With help from Hawkins’ book, such training will be more comprehensive and will be the key to propel small groups toward success in creating and equipping disciples of Jesus Christ for the transformation of the world.

How has your church been able to adapt fall faith formation activities during this chaotic time? How is your church adjusting to utilizing online. . .

What does your fall faith formation planning look like? Scott Hughes will be hosting two informal Zoom sessions to help your church brainstorm id. . .

Small Groups Help the Church Live Out the Baptismal Covenant

By Steven Manskar and Scott Hughes. . .