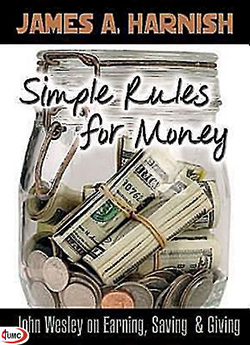 This short, substantial book offers an accessible introduction to John Wesley’s wisdom about money. Jim Harnish wrote Simple Rules for Money: John Wesley on Earning, Saving and Giving in response to the global economic crisis from which the U.S. economy is still recovering. It is estimated that charitable giving levels in America will return to their 2007 level in 2016. We have become more cautious about our spending habits due to the recent economic crisis. Harnish encourages us to learn to think about our faith and finances from a Wesleyan point of view, drawing on Wesleyan practices and preaching with a contemporary perspective.

Jim Harnish is a prolific author on intentional discipleship. He recently retired from a four-decade career in pastoral ministry, having served as the senior pastor of Hyde Park United Methodist Church in Tampa, Florida.

Wesley famously preached that Christians should “gain all you can, secondly save all you can, then give all you can” in his sermon on “The Use of Money.” Harnish uses a conversational tone to set these rules in dialogue with current ideas on living faithfully. He frames the sections of his book to help us see the economic crisis as a needed wake-up call, earning as a new opportunity, saving as the new frugality, and giving as leading to a new generosity (chapters 1-4). Harnish presents highlights from Wesley’s sermons “The Danger of Riches” and the last section of “The More Excellent Way” on how Christians can deal with money. Scripture passages that relate to the message are included.

Harnish successfully weaves together his insights with elements from today’s Christian writers and Time magazine along with the historic Wesleyan teachings. Harnish also quotes inspirational sections from two of Charles Wesley’s hymns.

Simple Rules for Money: John Wesley on Earning, Saving and Giving presents a balanced picture of John Wesley as person who held high standards, but who was also pastoral and reasonable. Harnish indicates his surprise that Wesley didn’t begin with tithing as his starting point when setting up a personal or family budget. As Harnish puts it, Wesley “begins with our own needs and builds concentric circles that reach out from us” (63). He provides Wesley’s list of questions that any Christian should consider before spending money (64). The author invites us to recognize Wesley as someone in touch with the perennial difficulties of people of faith who seek to follow biblical ideals in the midst of our surrounding culture. As Wesley said in his sermon on riches, “Who has the courage to declare so unfashionable a truth?” (57). Even in his time, faithfulness was seen as unpopular from the outside, but was known to be meaningful and rewarding to those who experienced it personally.

I recommend this book as an excellent resource for a four-week study by a church book group, Sunday school class, church council, or finance and stewardship committee. A brief section on “Questions for Reflection and Discussion” for each chapter is included at the end of the book (pages 71-74).

Harnish’s thoughtful approach makes this a great book for individual reflection or even a retreat for a team of lay leaders, church staff, or a clergy colleague group.

The monthly session is be hosted by Rev. Dr. Ken Sloane, Director, Stewardship & Generosity, to discuss questions about finance, stewardship, and. . .

Creating a Narrative Budget: The Story Behind the Numbers

Discipleship Ministries is excited to announce the launch of a new course for local church leaders: Creating a Narrative Budget – The Story Behin. . .