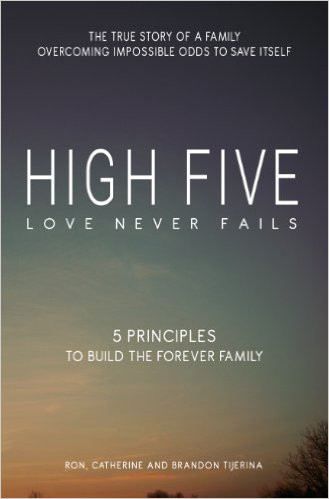 Ron Tijerina went to prison in 1991 and served a total of fifteen years for a crime he did not commit. In High Five: Love Never Fails, Ron, his wife, and their son weave together personal stories of their experiences, poignant and honest expressions of their feelings, and wisdom they gained that saved and strengthened their family. While in prison, Ron read a Bible passage that spoke to him and compelled him to stop acting like a victim, to own his lack of faithfulness as a husband, and to struggle to untangle himself from unhealthy attitudes and selfish behavior. He determined to rebuild his family relationships, even while in prison. In the process, he and Catherine discovered five key principles for healing their family: friendship, faithfulness, forgiveness, fairness, and fortitude. When others in prison saw the changes in his attitude and behavior, some began to turn to him for guidance.

In 2000, Ron and Catherine cofounded The RIDGE Project, a non-profit organization in Ohio dedicated to building strong families, whatever their situations and challenges. In 2010 the RIDGE Project received the Impact Award from Smart Marriages for its work with incarcerated fathers and their families. In 2011, the National Fatherhood Initiative of the Department of Justice and the Department of Health and Human Services identified this project as a “Best Practice.” In 2012 Ron and Catherine were invited to the White House for recognition as champions of change in the field of fatherhood.

How did two people who admittedly started their marriage and family ill-equipped “to build a healthy, successful marriage and family” overcome their suffering and mature into leaders in a movement that has touched more than a hundred thousand lives (p. iii)?

Ron credits his prison sentence for saving his family. In the “Acknowledgements” at the beginning of High Five, the authors state: “We give all glory and honor to our Savior Jesus Christ for carrying us through our darkest hours and setting us on solid ground. He is the true author of our story and these principles.” Catherine later expresses her belief that the real turning point for them was when they decided not to be victims of their unjust circumstances, but to own the mistakes and unhealthy choices they had made and work toward a better future.

Readers will be inspired by the way the authors faced their challenges and persisted in their efforts to resist being defined by the prison sentence. Their book offers glimpses of the realities of prison life, especially the difficulties and discomforts of visiting a loved one in prison.

Couples looking to strengthen their marriages and families will find encouragement and guidance. Some may want to use the services of this non-profit organization. Visit www.theridgeproject.com to learn more about the activities and offerings of this unique and powerful ministry.

Making the Most of Online Small Groups

For many of us, we are living in unprecedented times. The recommendations for social distancing and even self-quarantine threaten to raise our co. . .