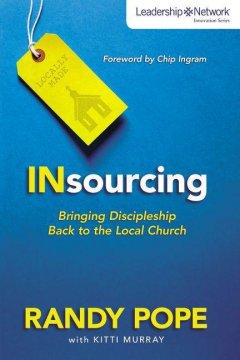 The church needs a new model for discipleship. That is the thesis Pastor Randy Pope puts forth in his book, INsourcing: Bringing Discipleship Back to the Local Church. The model he has used to grow disciples at Perimeter Church in Atlanta is put forth with the acronym LOLMD (Life-on-Life Model of Discipleship). In this model, discipleship groups are composed of six to eight people of the same gender who attend weekly meetings. Group members covenant to meet together for a year and commit to daily personal worship. The structure includes a three-year leadership development process. Though some group members might leave the group over time, adding a few new people to the group is one aspect of the multiplication strategy. Intentional leadership development happens within the group as the leader and more experienced group members coach the new and younger group members. Additionally, those who have been in the group for three years are encouraged to begin a new group with people they select.

The life-on-life model of discipleship has five key emphases that form the acrostic TEAMS: Truth, Equipping, Accountability, Mission, Supplication. Built into this discipleship model are seminars and retreats offered by the church to supplement the LOLMD groups with information and spiritual experiences.

Pope rightfully critiques the attractional model of church growth as not focusing enough on discipleship. The foundation of his model is built on lessons learned from Alcoholics Anonymous and coaching techniques from Ken Blanchard (The One Minute Manager). Pope believes that too many churches have “outsourced” discipleship to outside organizations, when discipleship should be achieved “in-house” – thus the title, INsourcing. He notes the increase of self-identified Christians turning away from the church for their spiritual growth.

There is much to agree and disagree with about Pope’s proposal. At its best, his model is close to the “method” of Methodism developed by John and Charles Wesley. The Wesley brothers’ model or “method” of discipleship focused on relationships as budding Christians attended class meetings, then bands and select societies. This was a way of “insourcing” by connecting faith formation within the structure of a church. Those seeking growth in discipleship no longer had to go to a monastery or seminary for faith formation. Rather, formation in faith happened as disciples “methodically” progressed from prevenient grace to justifying grace and into a life of sanctifying grace through their small groups and in conjunction with the sacramental life of the church.

Pope would have been better served to note particular limitations or the weakness of small groups. By mischaracterizing or only highlighting the worst brand of small groups, he develops a straw-man argument in order to make LOLMD look better by comparison. Instead, Pope could have simply focused on the the life-on-life model of discipleship and its benefits. There certainly are advantages to the the life-on-life model of discipleship. The advantages are familiar to us Methodists and to anyone familiar with healthy small groups. Pope’s mischaracterization of small groups only served as a point of contention for me.

While the book does not come from a Wesleyan model and is longer than it needed to be, there are benefits to reading INsourcing. Pope is on point to emphasize relationships that encourage, support, and challenge people in discipleship above groups that place too great an emphasis on knowledge transfer. I know I have been guilty of focusing more on covering the “right” topics at the expense of activities and relational discipleship, and I suspect that many others have been guilty of this as well. Yet Pope’s point is partially undermined by his highlighting the need for sound curriculum. He asserts that good curriculum serves to control the teaching aspect of the group and to remove the chances of bad theology being spread. Controlling the spread of harmful theology is a danger any small-group model needs to address. But placing the burden on curriculum seems contrary to the LOLMD philosophy of leader development and fails to provide the control attempted. Relationship-focused discipleship will always be messy and will involve course corrections.

Within Pope’s argument regarding curriculum, he poses an intriguing question that accentuates the tension between curriculum and relational discipleship: “Can you disciple people without curriculum?” Certainly one response is to question the definition of “curriculum.” If we narrowly define it as resources sold by a church or book distributor, then the answer would be “yes.” However, if we define curriculum to include a plan for growth in discipleship than the answer to Pope’s question would be, “not well.” Pope’s answer is that “the person discipling is the curriculum for the person being discipled” (167). For LOLMD, curriculum provides intentionality and a measure of control over the information transferred. Pope’s intent is right, that without an intentional strategy for growth in discipleship, it is likely not to happen or to happen very well.

The greatest revelation that INsourcing offers is that having small groups and/or great curriculum is not enough for a sound plan of discipleship and leadership development. There are chapters scattered throughout the book that narrate a hypothetical LOLMD to visualize the model. These stories point out that small-group leaders have tremendous influence not only to the people in groups they serve, but also toward the network of relationships that extend out from the group. INsourcing helps readers visualize what a more relational small-group model might look like. United Methodists would do well to look within our own history and DNA to supplement what Pope offers in INsourcing.

As many have pointed out to me, the best small-group ministries are discovering and applying a Wesleyan model for discipleship. At its best, INsourcing gives us a peek into what those look like and reminds us that discipleship is the slow, relational process of making disciples that in turn make other disciples.

Faith Formation: Baptism of the Lord

This resource is meant to be used in connection with the worship resources for the Baptism of the Lord Sunday (January 12). The underlying questi. . .