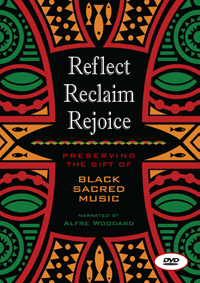 The film, Reflect, Reclaim, Rejoice: Preserving the Gift of Black Sacred Music, was honored Saturday by the Midsouth Chapter of The National Academy of Television Arts and Sciences (NATAS) at the 20th Annual Midsouth Regional Emmy Awards show held in Nashville.

“The success of the Africana Hymnal Project's mission to preserve this important music for the church and the world will be forever valued and appreciated by all who are shaped by sacred music. Thanks be to God,” said Dr. Timothy L. Bias, General Secretary (chief executive) of Discipleship Ministries.

Reflect, Reclaim, Rejoice captures songs that blacks who were enslaved in America four centuries ago created for solace even during the most inhumane conditions, said Steve Horswill-Johnson, Executive Director of Communications & Brand Strategy at Discipleship Ministries, who was the film’s executive producer.

“These songs, which are rarely sung anymore, are basically lost to the collective memory of America, but this documentary invites the viewer to see and feel how the music is being kept alive,” Horswill-Johnston said. 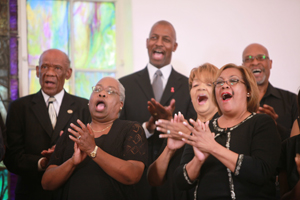 Narrated by Academy Award-nominated Alfre Woodard, the documentary was filmed on location at Methodist churches and institutions in Georgia, Maryland and South Carolina, where the oldest living African American music is still being sung. The film features choirs, groups and soloists performing traditional Christian forms of the Ring Shout, Singing and Praying Bands, Long-Meter Hymns and Negro Spirituals.

Maryland Public Television has included the documentary as part of its programming for Black History Month.

Reflect, Reclaim, Rejoice, which helps connect the past, present and preserves black sacred music for generations to come, is part of The Africana Hymnal Project of The United Methodist Church. The project is a joint effort by Discipleship Ministries and The United Methodist Publishing House (UMPH). For more information about the project go to http://bit.ly/1Dtbe1N.

The Africana Hymnal features 155 songs organized around the seasons of the year, the sacramental life of the congregation and the special days of the black church. The music selections cover multiple genres that demonstrate intergenerational connections and serves as a bridge between the music of the past, present and the future in order to encourage all of God’s people to sing.

The hymnal, presented on a USB flash drive, includes sheet music, accompaniment tracks and PowerPoint lyrics for all of the songs included, along with instructional guidelines for worship use that emphasizes congregational singing, sensitivity to regional differences, and inclusion of several cultures and dialects. Order the hymnal from Cokesbury. To order a DVD of the documentary, go to http://bit.ly/1KovsMC.

Lift Every Voice: A Celebration of Song from the Black Church Experience

The observance of Black History Month in the life of the Church can take on many forms. Yet any celebration without gratitude and appreciation of. . .