Discipleship Ministries | What Brings People to Church? The Survey…

Home Blog What Brings People to Church? The Survey Says...

What Brings People to Church? The Survey Says...

"Personal invitation from someone you know" is by far the most cited reason people first heard about and then started attending a United Methodist Church, according to findings about the United Methodist Sample in the latest US Congregational Life Survey. *

Here are two charts, courtesy of GCFA, that tell the story about what does, and does not so much, influence the decisions people make to start attending one of our congregations.

How did you learn about this congregation? 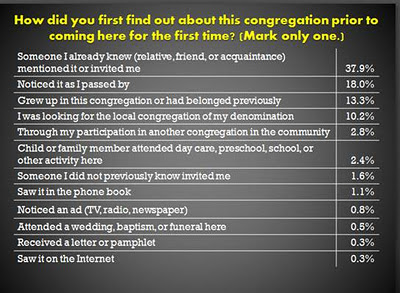 Look especially at the top two reasons, comprising over half of all responses (55.9%). The two biggest factors, by far, included someone the person already knew telling them about the church and noticing the building as they passed by. "Cold calling" is not that effective, or maybe just not that frequently done-- only 1.6%. Now look at the role of advertising. If you don't count the phone book (most churches only list rather than advertise there) it's a grand total of 1.4% who first heard about the church through an ad-- of any sort. Oh-- and the Internet? Hardly a factor at all in terms of "first impressions."

What brought you here the first time? 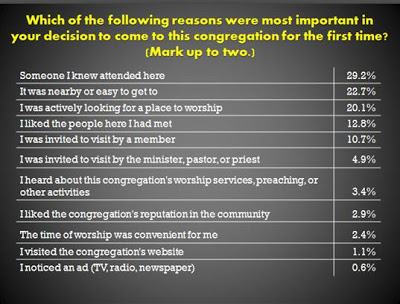 It's one thing to hear about an congregation, and another actually to start attending it. But the results are still strikingly similar to what we see above. Nearly 30% of those who start attending do so because someone they know asked them. That number could be higher, closer to 40%, assuming the 10.7% who say they were invited by a member did not also check the first response. Another 23% start attending because they could get to the building easily.

Now, look at the role of advertising. All forms, including internet websites, accounted for only 1.7% of those who began attending worship in one of our congregations.

Oh, and just for fun, look at the rates of response to clergy invitations-- just under 5%.

So what do we learn from this?

* The GCFA Office of Analysis & Research asked churches to distribute a survey questionnaire to each worshipper in the pews on April 26 or May 3, 2009. Participating churches were randomly selected from a list of congregational leaders who indicated an interested in the project on their 2008 Congregational Leadership Survey. Additional racial/ethnic churches were recruited with the help of several UM caucus leaders. Nearly 200 churches registered to participate in the survey, with over 70% returning their completed materials. The final data represents 141 churches with individual 8,622 worshippers.