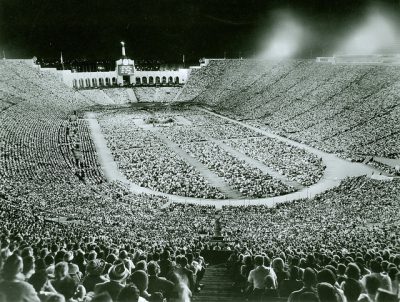 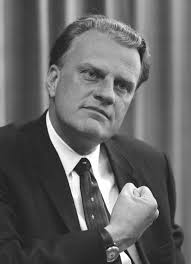 One of the childhood memories of early TV were the broadcasts of the Billy Graham’s crusades. I remember being a little afraid of Rev. Billy when he would grow loud for emphasis, but also I remember enjoying the stories he told. I quickly realized he was nothing like my preacher dad who tended to be soft-spoken and much more academic in his approach than Billy Graham. Regardless I was riveted by his oratory style and watching him in action was like watching an episode of Flipper, a favorite show for a 7-year-old. Even so really did not understand much of what he was saying. At the time, I actually wished my dad was a little more like him when I saw him on t.v.

Graham captivated the attention of many over the years even my dad. I remember hearing a story repeated several times by my mentor dad. He told of the story of a struggling pastor, a predecessor of his, who a few months into a new appointment had alienated much of the church leadership. When the District Superintendent had to be called to try to calm down the discontent, a vote had been taken (even though this is not the way Methodist did things) and the majority of the members desired a pastoral change. An open meeting had been called for the church members to air their complaints. One of the complaints voiced was that this pastor could not preach very well. One complainant put it poignantly, "What we need is someone who can preach like Billy Graham." Another complaint vocalized was that the pastor never ever had an altar call, like Billy Graham, and had not had many conversions and made new members, again like Billy Graham.

As my dad's story goes, the Superintendent listened to all the complaints and then offered his opinion. He first agreed with them that Billy Graham was a very great and wonderful preacher, and that every church deserved someone who could deliver a sermon like Graham. He mentioned that they the members who had to suffer through the sermons of a preacher every Sunday probably best understood exactly the type of minister they needed so he was willing to make a deal with them. He would call Billy Graham and see if Billy was willing to come serve their small rural church. Heck, he was willing to waive the fact that Billy wasn't Methodist (before the merger into the present UMC). But they had to be willing to pay Billy's salary and his staff's salary too. The Superintendent mentioned that he would like it if all of the churches he was Superintendent over were as willing to pay their pastor 150,000 a year, which was Billy's reported salary at the time. Or the other option was to keep their pastor at the time at $1500 a year salary. Of course the church decided that they couldn't afford to pay that kind of salary and Billy was never asked if he was interested. Instead, the church decided their current pastor was probably more valuable than they first thought and certainly a bargain in comparison. The Superintendent also let it slip that he had taken part in a Billy Graham crusade, in another state and that many of the conversions at the altar calls were people already attending local churches which were nominated and invited to wait to join the church during the Crusade with the idea that others who had been fighting the decision would be convinced to choose this opportunity to make a decision for Christ.

I remember reading Billy Graham's syndicated column on occasion when I was a young parish pastor and marveling just has much more liberal, were the views being expressed in his writing in comparison to his earlier preaching when I was a child. I was not surprised when 15 years later as a hospital chaplain resident, one of the patients I was visiting showed me his column and was quite upset, because Billy was saying he had changed his mind on some of his "life and death" opinions including his prior belief, that hell was for all eternity. It actually took me awhile to reason with the man, that what Billy Graham believed really didn't matter to his own faith and that preparing spiritually for a his next day dangerous surgery was much more important. Before I left the unit, I stopped in to see the patient a second time, only to discover his pastor had been into visit ( yes a United Methodist Pastor) and he had stirred the gentleman up again. What particularly had been difficult for the patient to believe was that Billy Graham had changed his mind in the first place. In his own words, "either Billy was wrong before or he was wrong now, since God doesn't change God's mind." It was his belief that Billy was wrong now because in the column Billy has stated "he had changed his mind to now believe that God was a God of second, third, and one hundred chances, never giving up on anybody, and continuing to try to redeem and restore those who found themselves in Hell.

I share all of this as a backdrop to a conversation I had during last week. The conversation at church on Sunday had turned to Billy Graham and his son Franklin. The person with whom I was talking had noted what he termed a "public falling out between Father and Son Graham in the past few years and wanted to know what it was about. My summation was that Billy was just aging and was in a different phase of life. Pressed for a more definitive answer about why they were squabbling over the finer points of theology, I shared with the person, it was about Billy becoming more Liberal in his old age and Franklin his son becoming more conservative. Initially, the person I was talking with thought I was talking about politically speaking they were now at opposite ends of the spectrum. So I responded that Billy Graham had been a friend, adviser, and confidant of such divergent presidents as Richard Nixon, Jimmy Carter, Bill Clinton, and George Bush so I did not think that Billy Graham was very public in his support or criticism of any political group.

No Billy Graham had become more liberal in his theology and his son Franklin was still holding on to the views he had heard and been taught as a child by the same man. During the conversation I thought again about my own "preacher dad." I thought about how we had long ranging debates, on theological issues, with his own liberal views becoming firmly rooted in me theologically, then observing him becoming much more conservative in his views during adulthood, only to become liberal again in his retirement and advancing years. I did not share this with my conversation partner. I did share with the person, that we are all person's with evolving understandings of God, faith, and life. I also mused that Billy and Franklin both probably would change their minds, as he probably had many times before it was all said and done. Finally, I thought the aging process did that to us all.

It is a funny thing to watch how aging changes us all and especially public figures like Billy Graham. I am sure the 20 or 30 something year old Billy Graham would argue theological points with the 90 plus year old Billy and probably not understand his positions on Hell and second chances. But how could someone younger share or understand what experience and maturing insight has taught an older version of themselves? I sure the experience of saying goodbye to his spouse in 2007 has changed him even more. It will be interesting to see Franklin if he lives as long as his Dad and to see his theological views when he reaches almost 100 years of age, after he has talked millions of times with God through prayer and struggled to hear what God was saying to him.

I have over and over again with those I have served as a Chaplain and pastor observed a change of thought process both theologically and politically brought on by age. I also have discovered some folks who fight changing their minds no matter what on matters of importance. One of the saddest quotes, I have heard from these people, describes them to a T. It goes like this: "I am the same Christian I was 40 or 50 years ago when I first became a believer." This is very depressing because as we grow in faith and spirit shouldn't that make us a different person. Living is about life long learning. Learning allows us to know more and theoretically change our minds. The aging process will teach more, which could and often does change our perspective and minds. I have changed my mind on matters of faith numerous times. Sometimes I am confronted with those changes, that is I get to observe how the aging process is developing me. Like when I sat down and read my early sermon notes, and was shocked at what I actually had said to those poor congregants that had to endure my sermons. Thanks be to God, that God continues to be patient with me as I develop in my faith and I age. Aging and its changing of perspective is such a neat thing to observe in oneself and others, including public figures like Billy Graham. I finished the conversation with the person I was discussing Billy with: "I like the Older, Kinder, Gentler, Billy Graham, a lot.." The person finished my thought then with a question: "a lot more, yes?"

Webinar Series - Dementia and the Church

For every individual diagnosed with Alzheimer’s Disease, an entire family is affected. Today, we light candles to honor the journey of all who ar. . .

A Message from Mom

My mother, who is just shy of her 98th birthday, has dementia. My sister, her primary caregiver, says Mom has her good days and her bad days; but. . .