Seasons and Series for Fall 2012 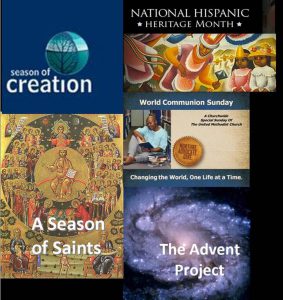 While there are hardly any special days or emphases on the United Methodist program calendar during July and August, that all starts to change dramatically in September.

In the US, the first Sunday in September comes right before Labor Day (September 7 this year). Click the link for prayers and a Great Thanksgiving that can help your congregation pray and praise God for the many gifts of human labor.

Throughout September, a growing number of congregations and denominations around the world, including the entire United Church of Canada, observe "The Season of Creation."Christians from Australia, Europe, South Africa, Canada and The United States have collaborated to develop a comprehensive set of worship and educational resources, not based on the Revised Common Lectionary, to help Christian congregations around the world discover and celebrate different elements of God's creation for each of the five Sundays in September. While The United Methodist Church has not "officially signed on" to this project, we do commend it for congregations to explore. Resources based on the United Methodist version of the Revised Common Lectionary and United Methodist worship and music resources are available here. If your congregation or worshiping community has or is thinking about developing a Green Team, or is looking for an opportunity to do a deep dive into ways to become more environmentally aware and responsible, this season and these resources (all free!) may be of significant help. For additional resources (for purchase), consider the excellent Green Church resources from United Methodist pastor Rebekah Simon-Peter.

While the Season of Creation is a worldwide Christian observance, the United States also keeps a civic celebration of Hispanic Heritage Month (September 15-October 15, 2012). Discipleship Ministries provides a number of resources for music and worship planning on our website and via the UMC Music Facebook Group as the month progresses.

October 4 is World Communion Sunday, and the kickoff to Discipleship Ministries' fifth year of supporting A Season of Saints. World Communion Sunday was founded in the mid-20th century at a time when many Protestant denominations celebrated communion quarterly, and not all on the same day. As monthly or even weekly communion have become the ecumenical norm worldwide, the idea of a "special" day when we would all celebrate has become less critical. But the recognition that all of us are part of the same body of Christ has not.

A Season of Saints is a way for United Methodists to spend the Sundays and weeks from World Communion through All Saints remembering and celebrating the lives, witness and example of Christians across the centuries, important Christians in our various United Methodist lineages, and particular "local saints" in each congregation each week. A Season of Saints also underlies and supports additional October emphases of Children's Sabbath (October 11) and Laity Sunday (October 18). Feedback from congregations who tried this in 2011 was uniformly positive and encouraging. Worship Planning Helps for October 2015 will also carry additional suggestions and resources for each Sunday of the celebration.

After the Season of Saints, it is time for Advent!

Wait, you say, doesn't Advent start in late November? For most Western churches, yes, it does. But as many ecumenical worship leaders have been noting for a number of years now, including at Discipleship Ministries, the readings in the Revised Common Lectionary, and in fact lectionaries before it stretching back before the tenth century, actually start Advent readings right after All Saints! Sign up now for our webinar, Celebrating Extended Advent: Why and How-To, September 15, 2015 at 7:30 p.m. CDT.

Celebrating a full seven weeks of Advent helps congregations regain a strong focus on the actual primary point of Advent (celebrating and preparing for the culmination of all things in the second coming of Christ!). It also helps us to use the readings we already have for the purposes they were originally gathered. A longer Advent starting earlier, even if not for the entire seven weeks, also takes a lot of the pressure off of the "December Advent/Christmas" wars many of our congregations have experienced.

The Advent Project website provides solid research and an ever-increasing array of resources, for free, for congregations interested in starting an Advent restoration project themselves. Be sure to check out the testimony of a United Methodist congregation that has been doing this for several years now, and how they've adapted the model for their context over time.

Month by month, season by season, series by series, United Methodists have a rich fall (or spring!) ahead.

How will you help your worship planning team get started?