In Jonathan Haidt’s timely book, The Righteous Mind: Why Good People Are Divided by Politics and Religion, he references an interesting experiment that possibly has implications about how firmly we hold our convictions and how we converse with others with whom we disagree. Haidt mentions an experiment from a 2006 article that I’ll attempt to replicate. I’ve got a stack of cards. Some are letters and some are numbers. If I pull out a letter, you get candy. If I pull out a number, you don’t candy. Really simple. Ready? Here’s the card -

So, do you get candy? Yes? Look again. Is it a letter or a number?

For playing my warped game, you should give yourself some candy. But the question is still open whether you have warranted belief to deserve the candy. Is it a letter or a number? So here’s a better question: Which did you want it to be? A letter, right?

Our desire for candy persuaded us, influenced us, to see a letter when it was actually ambiguous whether it is the number 13 or the letter B. Again, no big deal if candy is at stake. But what if I suggest that decisions of morality—let’s take an easy one, the morality of homosexuality— might be decided on a similar basis. That is to say, what if whether we affirm homosexuality or believe that homosexuality is immoral is due not to our reasoning or to biblical evidence, but to whether we 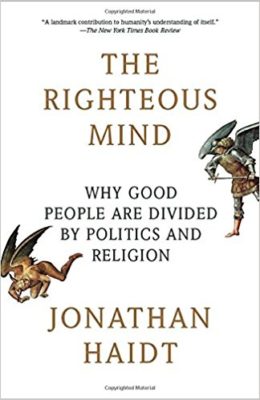 desire it at a deeply subconscious level to be moral or immoral? What I’m suggesting is that, even though our stated and conscious desire is to be “biblical” or “ethical,” what actually occurs for most people is that we are justifying a pre-conscience desire. Our pre-conscience desires are the persuasive forces that influenced (I didn’t say determined) how we decided our stances on morality.
Now this probably isn’t what you want to hear. The suggestion that our beliefs could be more pre-conscience than arrived at through reasoning and biblical interpretation probably won’t make me popular on the blogosphere anytime soon.

Here is where Jonathan Haidt can be helpful. One of the conclusions of his book, which explores various disciplines, including genetics, is that “We are deeply intuitive creatures whose gut feelings drive our strategic reasoning” (370). As a clergyperson with a Master of Divinity degree, a Doctoral of Ministry degree, and years of personal study and communal conversations about social issues, I’d like to think Haidt is wrong. However, pastoral experience, conversations on social media, and many other experiences lead to me agree with Haidt’s conclusion. How is this helpful, and does the Bible support this position? We’ll explore that in the next part of this blog series.

We are deeply intuitive creatures whose gut feelings drive our strategic reasoning.

For more information and resources regarding Courageous Conversations see this link.

This is the third in a series of blogs building on a couple of insights from Jonathan Haidt’s book, The Righteous Mind: Why Good People Are Divid. . .

What if we grow more divided?

“But what if we hold a Courageous Conversations event and we grow more divided?” This is a common fear I hear from church members about their hes. . .

Common Questions What is a Covenant Discipleship Group? A smaller group of youth who meet regularly and encourage each other to develop into mo. . .