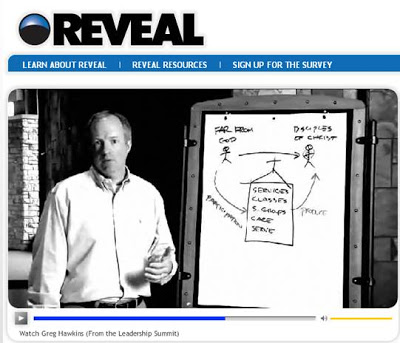 This is a still from the one of the videos from Willow Creek's original RevealNow website (courtesy of The Wayback Machine).

In this segment, Greg Hawkins is saying, "Increasing level of participation in these sets of activities does NOT predict whether someone is becoming more of a disciple of Jesus Christ."

In case you can't see the the set of activities clearly, it is services, classes, small groups, caring ministries, and servant ministries.

And again, the finding-- simply doing more of these things, or even generating more participation in these things, does not predict that the outcome is discipleship to Jesus. (Other key findings are here).

Even creating a system that makes all of these things available and somehow gets lots of people into them does not generate discipleship to Jesus Christ of its own.

In other words, there is no black box.

This is a still from the one of the videos from Willow Creek's original RevealNow website (courtesy of The Wayback Machine).

In this segment, Greg Hawkins is saying, "Increasing level of participation in these sets of activities does NOT predict whether someone is becoming more of a disciple of Jesus Christ."

In case you can't see the the set of activities clearly, it is services, classes, small groups, caring ministries, and servant ministries.

And again, the finding-- simply doing more of these things, or even generating more participation in these things, does not predict that the outcome is discipleship to Jesus. (Other key findings are here).

Even creating a system that makes all of these things available and somehow gets lots of people into them does not generate discipleship to Jesus Christ of its own.

In other words, there is no black box.

Okay, so what's a black box? A black box is a component of a system that takes inputs and does something mysterious with them to produce certain desired outputs. The mystery is that even if you know what the components inside the box are, you don't really have much clue how they work. It's just known (or at least believed!) that they do.

Now, black boxes actually work very well in a variety of iterative mechanistic functions. That is, when you have to do a lot of the same kinds of calculations on similar kinds of data over and over (such as when you're testing software for bugs), or when you have to keep generating a part in exactly the same way, and you also need to make sure nobody can mess with or even learn exactly how that happens (trade secrets, that sort of thing), the black box is exactly what you need. And when a given black box is no longer generating the results you are looking for, then you either replace it or get someone to diagnose and repair a faulty component or adjust the outputs of the components relative to one another.

Black boxes really do work-- for numbers, data and things-- at least within reasonable tolerances.

Many of our approaches to thinking about congregations since at least the 19th century have believed there is a black box, that the congregation is that black box, and that the programs of the congregation-- its small groups, its caring ministries, its servant ministries, its worship services, and its classes-- are the components. There's no particular explanation of how it is that these things are supposed to generate discipleship, but it is surely believed that they do. The awareness is also that one has to keep cycling through the various components of this black box over time before one expects a lot of measurable outcomes. The iterative nature of the system (weekly public worship, weekly small group meetings, regular schedules of classes, organized training and servant ministries over time) strongly suggests that few expect that one-time experiences with any part of the system will lead to dramatic change that endures. At the same time, there is openness to the possibility of "quantum experiences"-- dramatic encounters or movements of the Holy Spirit in our lives-- where sudden, major leaps forward can and do occur, though on a fairly unpredictable basis.

We have believed that if you have those components in place, and you are doing them the "right way," (whether defined in terms of procedure, doctrine or "relevance"), and you're doing them where people actually are, then you should have an increasing number of inputs (in this case, people) entering your black box (congregation) and a correspondingly increasing number of outputs (people becoming and maturing as disciples of Jesus Christ) as people continue to interact with the various components of the congregation over time.

A corollary is that if the result is not measurably improved discipleship, the best way to address that is either to replace or fix a faulty component (maybe a dysfunctional small group, or a worship service that has become less "relevant") or tweak the arrangement of the components just right (change schedules or places or the amount of time when particular groups or services happen). Do that right, we think, and you'll get back to producing the expected outcomes again.

We do believe in the black box version of congregational mission, structure and vitality. We teach this. And we build or seek to plant, transform, revitalize or redevelop congregations on the basis of this.

Yet the Reveal study says there is no black box like this.

Well, of course the black box does exist. Reveal's point is it does not actually work as we may keep believing and advertising it does. There's no question that the black box (the congregation) influences people, and sometimes profoundly. So do many other kinds of organizations with which people may be involved over a period of years. If we want to equate that kind of influence with actual discipleship to Jesus, then we might say the congregational black box does work. But if we want to equate discipleship with discipleship-- Reveal says the black box approach does not work.

At least not well.

As Hawkins goes on to note, what Reveal shows is that the congregational black box can be pretty good at helping people have an initial encounter with Christ, and even at fostering a "falling in love experience." But it generally doesn't move people very far in terms of maturing, much less maturity. As the Wesleys might have put it, it can help them encounter Christ and even decide they want to follow him (prevenient and justifying grace), but it does little to help them learn actually how to follow Christ or come to "have the mind of Christ" (sanctification moving on to perfection/maturity).

Going Beyond Unexamined Faith in the Black Box

So if Willow Creek's conclusions in the Reveal study are true, and they've been out there now for nearly six years (for Willow Creek itself) and over three years (with further work with over 20,000 other people in hundreds of other churches), why would United Methodists or others still try to proceed as if the black box actually can produce disciples of Jesus, or (which I think may be more of our situation), that maybe the problem really is a matter of optimization-- updating or repairing or rethinking or adding more instances of the same parts or retuning the components of the black box-- and not a problem of far more basic engineering... namely, that the black box itself does not generate the desired outcome well, and maybe never has?

I think we all have ideas about possible answers to that question.

But being able to list why something doesn't work isn't the same thing as being part of designing and implementing something that does.

And there's something more at stake here. What Reveal also shows is that the more people had matured and become Christ centered, the more likely they were actually to leave the congregation altogether!

That is, the black box actually has the opposite effect of what it claims. Instead of making Christ-centered disciples, it often tends to get rid of them!

That's why before we leap to conclusions about what to do instead-- and thereby perhaps actually substitute one black box approach for another-- we need to spend some time first in examining and naming all the ways where we still apply "black box" thinking to our lives as disciples of Jesus and our work of discipling others in his way.

And part of that confession may need to be that we are powerless to overcome how habitual and entrenched black box thinking has become for us. Truly, Western Christianity may be so steeped in a black box enculturation of doing and being church, that we need something like an exorcism, cleansing by the Spirit and re-wiring of our synapses to set us free.

So... to begin that process, two questions.