The end result of this suspension of Sections 217 and132g is that1 moving expenses incurred during that time period will not be a deductible expense except forcertain members of the Armed Forces and 2 any reimbursement by, or payment of, theseexpenses by an employer during the same time period will need to be reported as taxable incometo the employee... br --GCFA Legal Team 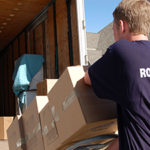 We are entering the season when many churches are preparing to receive newly-appointed pastors, and those pastors are contemplating one of the least popular parts of our itinerant system: packing up and moving.

The recent (end of 2017) changes to federal tax laws have not helped with the pain of moving and in fact have added a bit more of a bite. Those clergy who are moving in 2018 will have church-paid moving costs reported as income on their W-2 form for 2018 taxes. Here is the statement provided by the legal team at the General Council on Finance & Administration:

The Tax Cuts and Jobs Act (the “Act”) made numerous changes to the taxation of both individuals and organizations. Several of the changes relate to deductions available to individuals. One such change that has possibly received less attention involves moving expenses.

As outlined extensively in the IRS’s Publication 521, the “deduction of certain moving expenses to a new home because [the taxpayer] started or changed job locations” has been an available deduction, and it is created by Section 217 of the Tax Code. In addition to the available deduction, another section of the Code – Section 132(g) – provides that the reimbursement of qualified moving expenses by an employer will not be treated as a taxable fringe benefit. In other words, if the employee would be able to take the moving expense as a deduction, the employer could pay for those expenses on a tax-free basis.

Unfortunately for those who will incur moving expenses that would meet the deductibility standards outlined in Publication 521, the Act has suspended the application of Sections 217 and132(g) from January 1, 2018 through December 31, 2025. The end result of this suspension is that (1) moving expenses incurred during that time period will not be a deductible expense (except for certain members of the Armed Forces) and (2) any reimbursement by, or payment of, these expenses by an employer during the same time period will need to be reported as taxable income to the employee (again, except for certain members of the Armed Forces).

Thus, for example, if a local church covers some or all of the moving expenses of an employee, such as its pastor, the church will need to report that amount on Form W-2 as taxable income to the employee. And, as another example, if the payment of moving expenses is made by an annual conference on behalf of a pastor serving a local church, the conference will likely need to issue that pastor a Form 1099-MISC reflecting the amount paid (the instructions to Form 1099-MISC state Box 7 should include “taxable fringe benefits for nonemployees,” which will presumably include moving expenses for the years during which Sections 217 and 132(g) are suspended).

Whose Birthday Is It?

In what ways could churches like yours offer people an avenue to give a gift in honor of a loved one who doesn’t need anything, who already has m. . .

Six Mission Projects Any Church Can Adopt in 2023

Preparing to participate in these six Special Sundays is easy because there are bountiful resources available to help you communicate these missi. . .

When Is It OK to Say No?