For seven days, the pilgrims learned about the missionary efforts to South Korea and experienced the intentional practices of spiritual disciplines that led to the rapid growth of Christianity in the country following the Korean War. Each morning began with a prayer service, where hundreds of the Bupyeong members started their day with an hour of deep prayer and reflection.

Connecting with God early in the morning through the 5 a.m. morning service has reignited a passion for prayer in my life

“Connecting with God early in the morning through the 5 a.m. morning service has reignited a passion for prayer in my life,” said Sara Nelson, an elder from the Dakotas Conference, who plans to share the Koreans’ passion and enthusiasm for fervent prayer.

The days were filled with visits to historic sites in the missionary movement in Korea and tours of vibrant, vital Korean Methodist churches around the Incheon and Seoul area.

An especially poignant experience was visiting the Unified Observation Tower less than a week prior to the recent historic meeting between the leaders of North and South Korea. The pilgrims circled in prayer, seeking God’s peace, healing and reconciliation for the divided country. 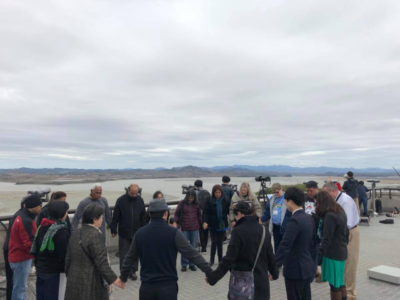 Hospitality is one of the profound values in the Korean culture and Bupyeong Methodist Church. Most of the pilgrims had never experienced that type radical, sacrificial love and care which was extended throughout the seven days.

“From the moment we arrived, the hospitality and the love offered was a powerful reflection of the love of Christ that is a natural part of who they are. It continued every second of our time with them,” said Ray Amos, an elder from the Holston Conference.

Hosting Christian brothers and sisters from around the world and offering their exposure and immersion program is one of the most important ministries of the congregation.

The pilgrimage to Korea was the vision of David Kim, Director of Asian and Pacific Islanders Ministries at Discipleship Ministires. He plans to continue offering the pilgrimages to lay and clergy across the denomination.

Gloria Juan, a lay leader from Kona United Methodist Church in Kona, Hawaii, reflected, “This journey showed me the power of God’s love through the people and programs of the churches in Korea, especially in the Bupyeong Methodist Church. But more importantly, this pilgrimage showed me how the power of prayer can further the kingdom of God here on earth.”