Discipleship Ministries | In Praise of Pews

Home Blog In Praise of Pews

In Praise of Pews 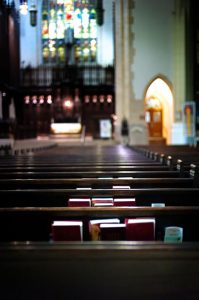 Typically 15-25 feet long, made of hardwood, bounded at each end by an upright "end cap" that is at once wall, gateway, and aisle boundary, the pew has received its share of critique by ecclesiologists, liturgists, theologians and worship designers alike in more recent times, myself included.

During the past 50 years we've seen four distinct movements in Western* Christian worship all coming up with a generally negative assessment of pews. The liturgical renewal movement, given a huge boost among Protestants and Roman Catholics alike by Vatican II, called for much more participatory, kinetic, and multi-sensory worship than pews could typically afford. The contemporary worship movement starting in the 1980s, representing a confluence of Pentecostalism on the one hand and evangelical and mainline church growth movements on the other, rejected pews as "seeker insensitive," and also getting in the way of the capacity of people to move and dance as part of worship, and opted for more individual seats. Related to this, the rise of new church starts in "non-traditional" locations (storefronts and schools, for example) and the parallel development of megachurches brought with it the replacement of pews with either folding chairs (for ease of setup and teardown for new churches without their "own" worship space) or theater-style, individual seating. Finally, worship designers across multiple denominations and theological spectra have been calling for greater flexibility in customizing worship space for each "worship experience," or at least for each season or series, something "fixed" seating of any kind generally impedes.

There are plenty of good reasons not to like pews. They're hard. They take up a lot of space. They limit creativity in the design of worship and the mobility of the people, at least to some degree.

But there are also a few things pews offer that just can't be had as in quite the same way in other kinds of seating.

So there you have it-- seven points in praise of pews.

Are pews the one right solution for every Christian worship space? No, no more than are folding chairs, "pew chairs," stacking chairs or theater seating. If you have pews where you worship, use them to the best advantage you can. If you hadn't considered them, maybe these points (or others) might give you a few reasons to put them on the radar screen the next time you or your congregation are considering seating options.

And as Chuck might say, if you want to know more, ask a church historian.

Or for a contrasting view from an Eastern Christian perspective, ask an Orthodox priest. Tell 'em Taylor sent ya.