Discipleship Ministries | If I Have to Talk About Dying, I Will Just…

Home Blog If I Have to Talk About Dying, I Will Just Die or the Best Death Prep Book on the Planet

If I Have to Talk About Dying, I Will Just Die or the Best Death Prep Book on the Planet 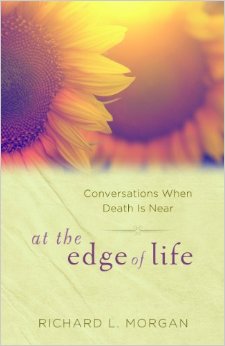 focused upon is Death Preparation, which encompasses not only what is out there at the end of life but dealing with the loss of loved ones, so grief is a part of it. The longer we live of course the more people whose passing we have to grieve. You would think this would translate into a greater ability to process those deaths, with the whole process taking less time and not being as intense with each death. You would also think that our own eventual deaths would be something we would be more accustomed to thinking and talking about. But this is not the case according to the experts I have read, and not been my own practical experience. While this on the surface seems counter-intuitive, it does make sense if we think about it for a second.

When something is painful, of overwhelming, or both we tend toward avoidance of it. When it is fearful and moreover a mystery, there is a certain fight or flight instinct which also takes over, and many of us become a part of the flight or avoidance camp. Even, those whose first instinct is to fight, will often translate the fight into a weird sort of battle: instead of fighting death head on, they will redefine terms, by claiming it doesn't really bother them so they therefore have no need to talk about it, plan for it, or even think about it. Many people of faith are like that. So are people who are suicidal, btw. The community of believers we call synagogues, churches, parishes, gatherings, does its people a disservice if we do not offer an opportunity to talk about death in a constructive, safe, and hopeful manner.

When I was a part of a parish as the leader, it was a grave struggle (no pun intended) to encourage people to talk about death and dying, unless they had lost someone recently or they had endured a medical emergency. This frustrated me to no end, which is why I hung up being in the parish and opted to spend time serving a captive audience of Older Adults in institutional chaplaincy, better known as a Continuing Care Retirement Community, named Redstone Highlands. Here I had a captive audience of folks who were confronted everyday with death, even if they did not want to be, because the sheer size of the community and the number of employees there, it meant we lost both residents and staff every single day. It seemed like a miraculous and wonderful day or week if no one died, but even so we lived with a long memory list of those who had been a part of the community but were no more, as their names were recalled in the stories and consciousness of us all daily.

Surprise of all surprises was it was actually sometimes just as hard to do death preparation with members of the Redstone community as it had been in parish life. Oh it came up more often, yes, but this did not mean we actually had a great discussion about it. For a time, I blamed myself for not finding a way to open people up to the possibility of talking about death. I did sometimes though. Actually, I got pretty good at getting people to open up about dying and the death of their loved ones. I even got cocky about it. I thought about going to NPR and pitching a new radio show sorta like the old "Speaking of Faith" except entitled "Speaking of Dying." I shared this with someone and they laughed so hard it made them cry and then asked me to think about the nicknames I would pick up like Brother Reaper, Rev. Death, and Dr. Die. They all made me cringe.

When I became removed from this world and had distance and perspective on the issue I realized something very key. This was I good at getting people to talk about death, opening them up, but I was just taking advantage of their vulnerabilities. It was no different than my previous invention of myself in the parish. It was still mostly people who had had medical emergencies recently, when they were still afraid of death and those who had lost someone close to them who were actively grieving who were prepared to trust me to discuss this painful, fearful, subject we all really avoid. I also realized when I opened people up to such a discussion I was actually giving them very little in return. Probably because I did not have the answers worked out myself. I also realized very quickly I was asking all the wrong questions. I promised myself when I came to my present place of service to learn all I could to offer it to those who need it most.

So I have read everything I can get my hands on about death and dying, grief and grieving, plus about listening and doing therapy and care with folks.I started with those primers like On Death and Dying by Elizabeth Kubler-Ross and have listed about 50 of the best books, TED talks, videos, lecture, and other resources. All of them however I would gladly sacrifice for one very short, simple, and eloquent book, on raising the right questions and inviting love ones into one's own death preparation process or thinking. This book is At the Edge of Life by Dr. Richard Morgan. It is the single best book on death preparation ever written.

Projecting myself back into those encounters I had as a caregiver, chaplain, and as someone's friend, when I talked about death and dying with others, I now recognize when I was raising questions, I was raising the wrong questions. I have always been taught if the answers are all wrong then it is really the result of incorrect questions to start with. But looking back, after reading and rereading this book several times recently, I can see both my questions were incorrect and then my answers I gave to others they were not even close to what was actually needed.As prepared as I actually am in the field, having spent time as a counselor and hospice chaplain, I shudder to think about the kinds of conversations which both laity and clergy alike have about death and dying. I remember my own sense of not having the right words sometimes to say early in my career, and even worse with family and friends.

It is hard for me to believe this book has not been promoted more by Upper Room Books which publishes it, that it has not yet become required reading for seminarians, and is not being passed on to a whole new generation the way Henri Nowen's "Wounded Healer" was when I was in my Master's programs. Especially since this book was written by a pastor, chaplain, professor of religion, and expert on aging. I mention the book to other clergy and they mostly haven't hear of it yet, but if I mention it to counselors both secular and pastoral, and they not only have heard of it, but use it. It is a real shame that this book is not being used by churches to help their people talk through death and dying, long before the time when these conversations are made necessary by fate. The ideal time to study this book is when a person is a long way from death instead of when death is on their door. This book is just the type of book to use to jump-start the conversations.

Moreover, there are study guides for this book, At the Edge of Life by Dr. Richard Morgan. He is also available to discuss it with groups and individuals. I believe this makes a great gift to give to particularly older adults but folks of all ages. Let's face it, when we are gone, our loved ones will grieve better if they know we were satisfied with our lives and not fearful of our deaths. This book not only helps anyone get started on preparing for their deaths but helps them help others do the same. Moreover, everyone dies and whether we die or not or even when we do not largely control. It is how we die which is important. This book is the best book for helping a person to die well and to help them help others to do the same.