Discipleship Ministries | Going Deeper as We Go Wider: 'Becoming Who…

Home Blog Going Deeper as We Go Wider: 'Becoming Who God Wants You to Be'

Going Deeper as We Go Wider: 'Becoming Who God Wants You to Be' 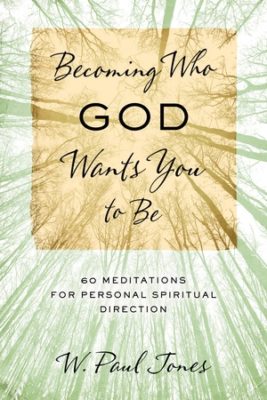 I’m fascinated with the life journey of W. Paul Jones, whose book, Becoming Who God Wants You to Be, is in my hands. I had never met him and only had read short blurbs about his life from the back covers of books he wrote gleaned from his Amazon Author page. He was an elder in The United Methodist Church, a professor at St. Paul School of Theology, and is the father of five daughters. He became a Trappist monk and a Roman Catholic Priest. He has written at least 14 books and currently serves as Resident Director of the Hermitage Spiritual Retreat Center on Lake Pomme de Terre in southern Missouri.

I am interested to learn more of the journey that took W. Paul Jones from being a United Methodist minister (like me) to a Roman Catholic monk and priest. More about this journey later. For now, I want to introduce readers to the book I have in my hands.

Becoming Who God Wants You to Be was published by Upper Room Books in 2013 and comprises 60 meditations for personal spiritual direction. If you are a church planter or a pastor working on revitalization of a local church, you may not have time or the funds to engage the services of a Spiritual Director. Spiritual direction may not be on your radar screen. Jones offers you and me a way for self-guided spiritual direction in this book. It’s worth the time to read it.

Before Jones gets into the meditations, he orients us on what spiritual direction means. Jones isn’t so keen on the notion of “director.” He prefers Jesus’ term, shepherd. He writes: “With Jesus as our model, we should perhaps be a bit wary of the term, director. Jesus’ preferred method of formation was less instructional and more relational in telling of parables that evoked self-guidance” (p. 12). For Jones, spiritual direction is all about “supportive accountability.” He cites Wesley’s introduction of accountable discipleship groups as a good example of how this is done. The point of spiritual direction is “to become the best version of ourselves that we were created to be” (p. 15).

The sixty meditations provide a way to discern “what the Spirit is doing on your pilgrimage” (p. 23). The meditations are short—a page to a page and a half—and are meant to provoke thought and reflection on our spiritual journey. Each meditation concludes with a provocative question for reflection or a short assignment. The idea is to spend about a half hour reading and writing down reflections. By keeping a running journal as you go through the meditations, you will have a record of your spiritual pilgrimage. Even more, you will find yourself yearning for a deeper dive into spiritual formation.

Many church planters and revitalizers tell us they feel isolated. What they are doing in trying to plant a new faith community or turn around a declining church often looks strange to other pastors of existing congregations. And, if you are successful in pulling together new people for a new place of Christian community, or by reviving a local church, you may even get shunned by colleagues who are jealous and fearful. Church planters and revitalizers also tell us that they are busy. Their lives are filled with meeting new people, building relationships, walking around the neighborhood, setting up office in a corner café. Their lives get so filled that burn-out can come unexpectedly into life.

And, if you are successful in pulling together new people for a new place of Christian community, or by reviving a local church, you may even get shunned by colleagues who are jealous and fearful.

Jones’ first meditation on abandonment speaks directly into the sense of isolation. His second meditation, accountability, gives us a practical guide for measuring ourselves to Paul’s list of spiritual fruit. He writes about the good news of being “Chosen,” in another meditation. His meditation on diversity of perspectives gives us a typology for differing ways Christians “experience human life and deal with it” (p. 60).

And so it goes, from A to W, abandonment to worship, that Jones provides a self-guided tour into self-spiritual direction. 60 meditations that are well worth a two-month dive in going deeper in our spiritual journey even as we attempt to go wider in our reach to expose the riches of the gospel to new people.

So, what about the journey that W. Paul Jones took from being a United Methodist elder to a Trappist monk and Roman Catholic priest? I had the chance to talk to Paul by telephone and what a delight it was! Jones’ journey started in Johnstown, Pennsylvania, a coal mining town. He went to the local United Methodist church and from there to a Methodist college and eventually to Yale Divinity School. He earned a Ph.D. from Yale University and became a professor of religion at Princeton University. But the Spirit gnawed at him for something more for his spiritual formation. He reflected that the life he lived was no different from non-religious people.

A new opportunity opened to teach at a newly formed seminary, St. Paul School of Theology in Kansas City. He and his family (he was married and had five daughters) were committed to social justice and moved to the inner city. They were deeply involved in social justice work. However, the teaching, the activism, the writing of books all led to burn-out.

A new door opened for Paul during a sabbatical leave. He stayed at a monastery in Snowmass, Colorado, and this location became sacred ground for him and his family. The spiritual practices and lifestyle of the monks spoke to the deepest part of his soul. He noticed in these monks something he yearned for in himself.

Years later when his wife died, and his daughters grown, Paul Jones took a deeper dive into the spiritual life that had nurtured him over many years. He began referring to himself as a Methodist Catholic or a Catholic Methodist. He received spiritual direction from a Trappist Monk at a monastery in southern Missouri. He never gave up or wanted to give up his Wesleyan and Methodist heritage, but he also wanted more. It made sense for him “to go the whole way,” by becoming a Trappist monk and an ordained Catholic priest. He would have preferred to have kept both his United Methodist ordination and his new Roman Catholic ordination, but church polity got in the way. He still thinks of himself as a “Methodist Catholic.” He left his seminary post to become the Resident Director of the Hermitage Spiritual Retreat Center on Lake Pomme de Terre in southern Missouri.

For one week a month, he lives in silence and solitude in the tradition of Trappists. On other weeks, he provides spiritual direction and uses his gifts as a craftsman to repair buildings and build new structures at the Center. His message to us in these challenging times: “Seek peace, persevere in the faith, and preserve the heart of the Wesleyan tradition.”

I recommend reading Becoming Who God Wants You to Be: 60 Meditations for Personal Spiritual Direction and opening yourself up to the possibility of taking a deeper dive in spiritual formation.

Each year, we at Path 1 and Discipleship Ministries collect data on the number of new churches, faith communities, and fresh expressions that hav. . .