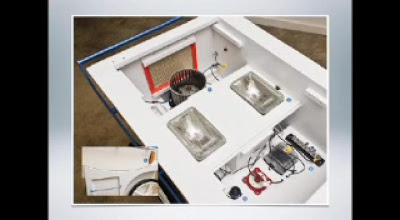 Pictured at the right is an incubator. If it looks like it's made of car parts, that's because it is. It was designed by a company that specializes in appropriate and sustainable technologies for developing countries, many of which have access to a steady stream of reliable car parts (such as the headlights that provide the heat and the car battery that powers it) and almost zero access to the specialized parts that most other companies use for such devices.

John Wesley was noted for his exceptional passion and commitment to proclaiming and leading people to experience the new birth, the dawning of justifying grace in their lives.

But he was even more interested in ensuring that those newly born in Christ had everything necessary to get out of spiritual infancy alive! He was witness in his own day to too many others also preaching the new birth and stopping there, with the result that there was a very high rate of those being "converted" either becoming frozen at a level of spiritual infancy or, more frightening, regressing to spiritual death once again.

Wesley resolved to have no part in contributing to the rise of "spiritual infant mortality" in his day. So he would not do field preaching where there was not an active Methodist society and a trial class meeting to refer those who responded. The trial class meetings were like spiritual incubators, constructed of others who were similarly responding to the gospel and leaders who would make sure they were actually growing rather than, as babies left to their own devices in adverse circumstances, failing to thrive.

This is why for Wesleyan Christians it is not enough that we try to increase attendance in services of worship or even have more "professing members" or even more small groups in our congregations. There are too many ways to do all of those things that have nothing to do with the new birth or actual growth in holiness of heart and life-- and they are being tried successfully-- if your metrics of success are increases in attendance, membership and the number of small groups.

But our earnest passion and the striving of our souls and bodies is not simply for significant spiritual encounters or pledges of institutional allegiance or places of belonging. All of these may be related in some way to the new birth, but none of them necessarily so. We, too, live in a hostile environment where there are way too many cases of infant spiritual mortality. Witness the "churn" noted in Willow Creek's Reveal study a few years ago, and found to be commonplace in many "growing" congregations in the US in the past several decades.

Congregations today as in Wesley's day are not equipped to prevent those newly born from failing to thrive. The "black box" we call congregations with their internal systems do NOT generate the outcome of discipleship at anything like an acceptable rate. Indeed, they tend to generate the opposite result-- at least if you follow the findings of Willow Creek.

It's time to end spiritual infant mortality in our own day.

It's time to start building more incubators-- lots of them.

These incubators aren't black boxes. We know what's inside them. And we know how and why they work. And we know they do work-- at a far higher rate of success than congregations do.

The parts are all around you-- but you may need to look beyond folks just in your congregation to find them and assemble them into a working incubator.

Covenant Discipleship groups can be such incubators. So can others. But I mention Covenant Discipleship here because I know what it's doing for me. Through it the Spirit is truly working. I am growing and being challenged and supported to grow further in holiness of heart and life. I'm more aware of my own failings to do so, but also more aware of the grace of God empowering me to do so. And that seems to be the experience of all of us in the group I'm part of.

Parts needed-- 5-7 people willing to covenant together to watch over one another in love to live the way of Jesus by supporting and holding each other accountable for the ways they will engage in acts of mercy (personal compassion and social justice) and acts of piety (personal devotion and public worship).

Get in one of these yourself-- or a group like it-- if you aren't already.

Then go invite others to do the same.

And then watch as fewer infants in Christ fail to thrive, and more of them grow into the full stature of Christ because they have the support systems they need to live as his disciples on his mission in the world.

For more about this incubator and how it is also a great example of how innovation normally works-- by using what's already available and connecting it in a new way-- watch Steven Johnson's TED Talk, "Where Good Ideas Come From."

In this webinar, Rev. Betty Kazadi Musau shares how the church in the Democratic Republic of the Congo responds to the needs of indigenous commun. . .

Why should we consider that ministry in the twenty-first century is different from other moments in church history? Why is it important to unders. . .