Earlie Pasion-Bautiste, DRI Asia Representative, reports below on one of those opportunities for teaching and learning together.

The Baguio Episcopal Area (BEA) of the Philippines Central Conference held its biennial United Methodist Aldersgate Mission Conference on August 9-11, 2017, at Venus Hotel, Baguio City. The first two days of the conference was devoted to the United Methodist Way Seminars which were led by Revs. Bener Agtarap and Stephen Bryant of Discipleship Ministries.

Agtarap led the sessions on The Mission of God and The Means of Grace while Bryant talked about The Means of Group and The Means of Structure. The topics were received well by a crowd of over 500 lay and clergy participants from nine annual conferences in the Baguio Episcopal Area. The distributed handouts also helped the participants understand the lectures and participate in the discussions. 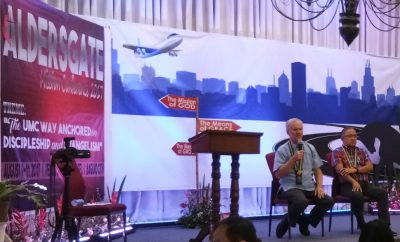 According to Rev. Joel Bengbeng, District Superintendent of Ilocos South District, these topics help give greater depth to the meaning of United Methodist doctrines. The sessions also assist church workers to know how to return home and educate members about the basics of Methodist faith formation.

The members of the Discipleship Resources-Philippines (DR-P) team attended the conference prior to their team meeting. In the meeting that followed the conference, the team discussed how to continue the roll-out of the UM Way seminars. They see value in bringing the presentations to the grassroots level, and DR-P can facilitate the contextualization of the materials.

Stop the Spread of COVID-19 in Church

The world is watching a dangerous disease spread. We don't know how widely or quickly the Coronavirus (COVID-19) will spread. I do know that Unit. . .

Response to COVID-19 and the Coronavirus Concern

Regardless of how serious you might think the virus really is, it makes sense to protect people as best we can. So, how should local churches res. . .